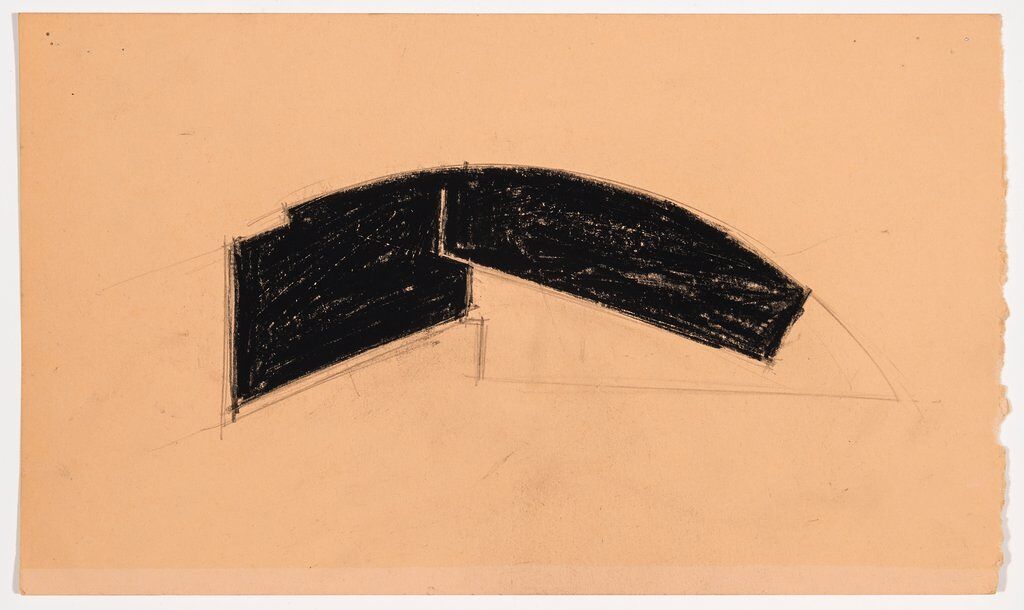 Ted Stamm (1944–1984) is one of the most multi-faceted representatives of the New York art scene of the 1970s and 1980s. The various series of his paintings, drawings, and spatial interventions relate to one another in complex ways. All his life Stamm worked experimentally, constantly engaging with the trends of the time while developing his own pictorial vocabulary.

While studying in Hempstead, New York, Stamm attended courses by the painter Perle Fine, among others. His early works, from 1967 onward, were used in a series titled 'Cancel': Influenced by Ad Reinhardt’s late work, he completely painted over them in black. Stamm’s focus on painting was an unusual stance, especially at that time, for a young artist in New York, where often only object art, performance, or text-based art forms were regarded as contemporary. With his experimental, explorative approach, however, Stamm opened up new fields and pursued them consistently.

The 'Wooster' series is of outstanding significance within Stamm’s œuvre; it was the continuation of early experiments with lines and forms. Inspired by the ground plan of a property near his Soho studio, he developed a simple and yet complex form in 1974: a square connected to a triangle. The two basic forms fuse into a single form, the 'Wooster' form, which in a variation as a stretched distortion was called 'Lo Wooster'. It is usually almost impossible to segregate visually this form, which was usually black and white, in particular when a band runs around the edge of the form. This guiding of the eye causes the viewer to participate actively in the study of form and plane as well as of the space surrounding the form and plane.

In exhibitions Stamm hung the 'Lo Wooster' variants—as the name suggests—very low, almost at the floor. This presentation makes the painting part of the architecture. The direct interplay with the space may be another reason why Stamm’s painting broke free of the rectangle of the easel painting with shaped canvases—a trend that was also of central importance at the time in the work of Kenneth Noland and Frank Stella.

Shaped canvases were also used in his 'Dodger' series in the mid-1970s. The 'Dodger' form, inspired by the same of a baseball field, is relatively complex and permits a large number of variations: On the top right it describes a low arch, which usually tapers to a point on the right. On the left, irregular, polygonal forms are added, with unexpected rifts and voids.

Variations, which Stamm was already evolving into a streamlined look, reflect his fascination with speed: new, highly reduced forms, such as the hard arrow form, suggest clear movement to the right or left. The colored bands that Stamm also used in his 'Wooster' works can trigger either a braking or an accelerating effect here. Movement is not just visualized but also thematized as a subject for research, making it possible to experience it.

With 'Designators', from 1976 onward, Stamm moved to the terrain of street art as an intervention in urban space. In addition to graffiti with 'Dodger' forms, over the course of time Stamm also altered the 'Wooster' form and thus kept the painting in a process, in movement. With the 'Wooster Designators', he took this concept even further: Stamm glued small 'Wooster' forms to the backs of cars and stamped them with a date. Around ten days later, he stamped the sticker a second time if he could find the car. By marking time in this way, each of these 'Wooster' forms had undergone motorized travel. These ephemeral actions were documented by the artist in photographs.

Stamm’s 'Tags' series of the late 1970s and early 1980s also have a documentary character. Stamm asked studio visitors to draw on a clothing label he had found and glued in a sketchbook. Stamm “responded” to it in a second sketchbook in which he did the same. The pages of the two books were then stamped to document the time and place of the exchange. This conceptual approach of relinquishing control over pictorial invention seems to contrast with the hard-edge paintings of 'Wooster' series and was probably also one of his numerous experiments.

When Ted Stamm died young—of a heart ailment at thirty-nine—he left behind a considerable œuvre. We see an artist who developed the ideas for his works across media and constantly refined them. He explored problems of visual representation and perception and approached them conceptually, for example, by responding to architecture, by formally and performatively expanding the zone of his artistic activity, and by incorporating movement and speed.