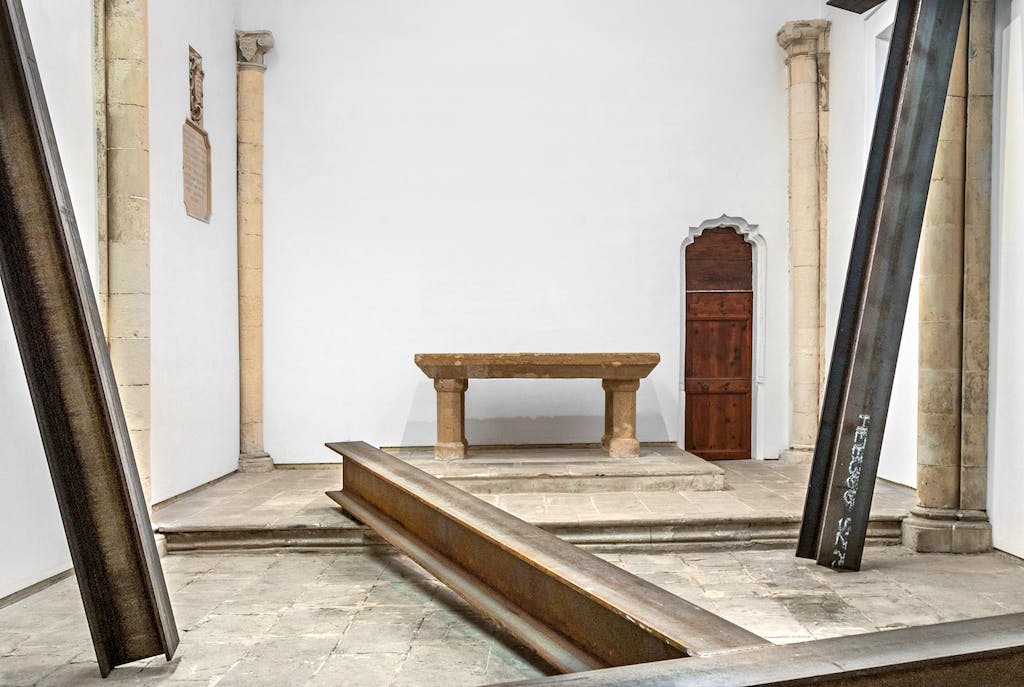 Pedro Cabrita Reis is one of the most prominent Portuguese artists of today. Among other venues, his works have been presented in the Documenta IX, at the 50th and the 55th Venice Biennale.

Cabrita Reis’s oeuvre is strongly defined by his origins and his surroundings. At the same time, he concerns himself again and again with fundamental issues of art, for example the concepts of painting and sculpture or drawing in space with sculptural mediums. In his work he breaks all the formal rules and artistic conventions, reinterpreting abstract forms and often, as if by magic, converting them into enigmatic objects.

Painting forms the foundation of Cabrita Reis’s complex works. His development of this medium has led him to three-dimensional works and installations, towards what he considers works resembling construction. In addition to abstract and expressive paintings, his works also encompass melancholic-archaic sculptures of an improvised quality as well as large-scale installations.

In the conception of his diverse works he employs simple building materials such as chipboard, bricks and plaster, but also industrial elements such as fluorescent tubes, glass and steel beams. Complex structures, that literally take possession of the exhibition space, are the result.

Cabrita Reis’s work often generates an atmosphere of intense silence. The stoically pensive character of his installations alludes to man’s homelessness as a fundamental constant of the human condition and is accordingly one of the most important leitmotifs in his oeuvre.

The profound diversity of his work shows the artist's interest in themes, such as as space, territory, construction and time. His work speaks to us of the construction of memory, which must never be regarded with nostalgia, but should be understood as a drawing of territory to understand the world.

On this occasion, specifically in the San Feliu Oratory, the artist has, through an impressive installation of solid iron beams, achieved converting the space into one of unsuspected fragility. The robust architecture of the old chapel is completely distorted. The spectator is left immersed in a strange atmosphere in which contradiction weighs heavily and where one must reconsider where the point of balance lies. Neither the walls nor the columns exercise their functions as support, it is in this context in which “Fallen and Standing” gathers its dimension.

Pedro Cabrita Reis does not tend to differentiate between working and exhibition spaces. In this particular case, virtually all of the works exhibited have been created in situ. Wood, wire, glass or worn metal, in harmony with acrylic, graphite and silicon.

The particular balance that Cabrita Reis achieves in his creative process results in a showing composed of installation and drawing, in which his mastery of sculpture is as evident as his capacity for visualization and construction. Capacity is the ultimate, that transforms the concept into experience and finally into a work of physical art.