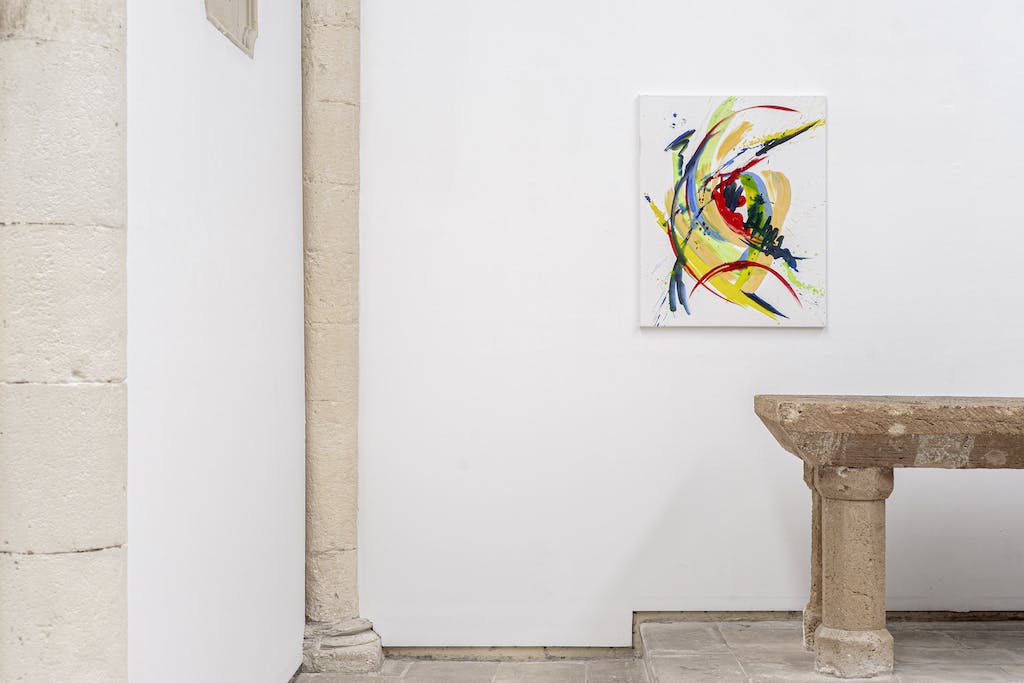 "Art is an abstraction: extract it from nature while dreaming of it." Berlin artist Christine Jackob-Marks has always unconsciously followed Paul Gauguin's advice, either when working on figurative or abstract subjects, landscapes or celestial spaces, when painting or drawing nudes or animals. Detached from preconceived ideas, she presents her work for the first time at Kewenig Palma. Her more recent compositions are pure offers of association, a harmonious , but also dramatic, free play of colours, forms and lines, projecting an enormous energetic power.

They are, she says, "always spontaneous stories", narrating pictorially, "nothing must be desired". She constantly seeks to express her own experiences and feelings. Her most personal problems, but also her socio-political fears should resonate in her works. Constant, it counteracts them with phases of intensely blissful moments. The title of her current exhibition reflects this vision of life: “light in weight”, despite how overwhelming the circumstances that surround us may become, is the hopeful balance of a life full of ups and downs.

In London, in front of a Renoir painting, she decided to become a painter - and not dedicate herself to the theatre, which her son Felix did later. Christine Jackob-Marks began her art studies in Paris, and continued in Berlin at the Hochschule der Künste. What distinguished her work from the outset was her distinct sense of rhythm - whether she painted contemplative fields, blazing forests or devastated open-cast mining regions. Whether she illustrated touching portraits of animals, sweeping naked female bodies - or even music, a powerful rhythm always pervaded her works. The world-famous American pianist Alan Marks, with whom she lived together for 13 happy years and whose name she later added to her maiden name, enthused about her idiosyncratic, pictorial approach to sound. For, as Kandinsky said, "painting can bring the entire content of a work to the viewer in a single moment - something that music is not capable of". Because it happens in the course of time.

The artist has now created her new cycle of works, each time in intense, creative moments. Over the decades, she has often shed her skin - constantly in search of completely new expressive possibilities and visual worlds. She thus stands in the ranks of many great artists who expressed

themselves in often very different work phases before turning to something completely new. They have never once tasted a successful style and then repeated it over and over again, not to say stopped. A period once completed, on the other hand, is for creative spirits, and Christine Jackob-Marks is one of them, uncompromisingly completed. She is not strained to become - even possibly - a recognizable trademark. A look back at the unusual breadth of her previous work is made possible by an opulent monograph she published only four years ago under the motto "There must be more than everything in life" by Kerber Verlag in Bielefeld.

It also reports on her design for the Berlin "Memorial to the Murdered Jews of Europe". In 1995, she led a group of young artists who won first prize in a major competition with their sketches and model views. The fact that it was then not realized on the huge area next to the Brandenburg Gate, i.e. in the middle of Berlin, and had to make way for a new call for entries, is ultimately due to the then Chancellor Kohl and a few whisperers. Unfortunately, Christine Jackob-Marks did not submit her design again in the second competition. But the press echo made her name and her work internationally known.

Creativity also arises from conflict. Not losing sight of the easy, even in gravity, creates a strength, sometimes a power of survival. This is what the painter wants to convey. Gauguin's advice to artists finally culminates in this recommendation: "Think more about the creation, about the creative moment, than about the result!