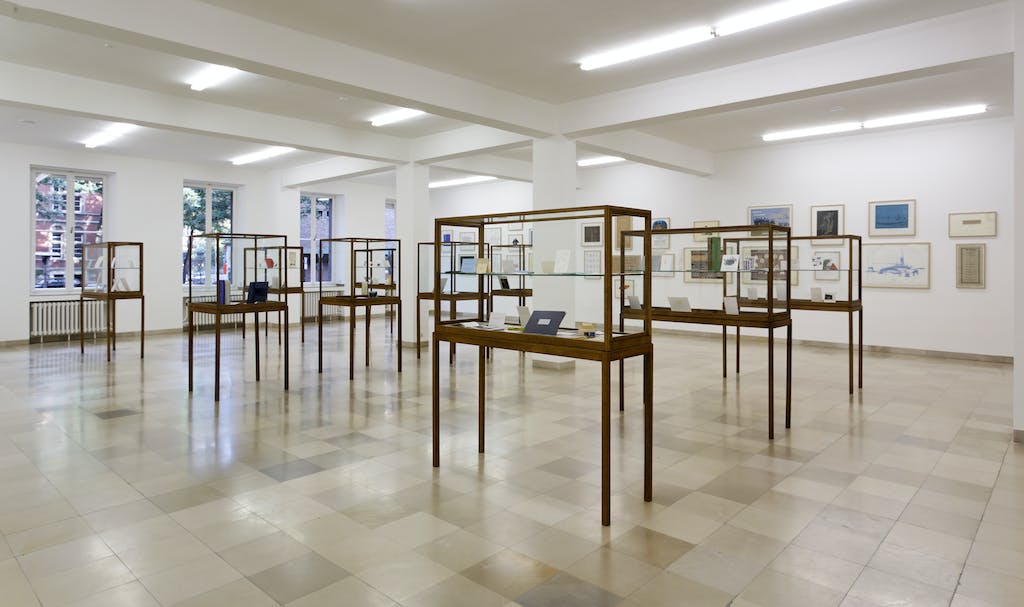 The Scottish artist Ian Hamilton Finlay who died recently at the age of 80 years and with whom the Kewenig Galerie has worked together for many years created an extensive opus of graphic work. Kewenig now presents an impressive overview of the versatility of Finlay's work showing the artist's fascination with European Revolution history as well as his close bonds to nature and his profound knowledge of occidental culture. Only rarely his poetry is concrete in a sense that it merely stands for an aesthetic object, its references are far more complex. Finlay takes us to a labyrinth made of wordplays, quotations and neologisms which stimulate even the most well-read beholder to put his general education to the test. At first sight Finlay seems to refer to something already known but then he leads over to his own artistic cosmos which can only partly be made accessible due to its versatility.

Words – either quotations, aphorisms or new creations – are either presented in isolation in Finlay's graphics or connected to motives which are graphically formatted by different types, fonts and colour. Thus the works act not only as regards content but also aesthetically. Emblems, technical drawings as well as monograms also appear in Finlay's work.

More than thousand motives have been published by Finlay, e.g. cards, graphic works, portfolios and booklets – in cooperation with assistants who are mentioned by name in the work's titles. These works have been mostly published unsigned and unnumbered but in a limited edition. In a scant 40 years of publishing Finlay created a complex hermeneutic cosmos of which each single work confronts the beholder with pretensions that seem to be antiquated at first sight but then turn out to be of an intellectual sublimeness that enhances everyday life.

The early graphic works from 1963 on rely mostly on advertisements in terms of fonts and colouring. From the mid of the 60ies maritime motives appear frequently which gradually turn to a naval force, often accompagnied by tanks, small arms and military warplanes. The use of runic writing and the visual handling of neoclassicistic basic principles of the Third Reich discredited Finlay: he was blamed by critics of being closely connected to the ideas of the Nazi rule. But it is a misinterpretation to take Finlay's artistic examination as a political attitude.

The biggest part of his oeuvre deals with the subject of the French Revolution, its representatives, course and body of thought. It shows Finlay's great interest in philosophy which is an essential part of the artist's work. Finlay pursued a kind of mass production of his graphic work (almost published as if being leaflets) in order to integrate it into everyday life which - in the artist's opinion – seemed to be much to secularized.