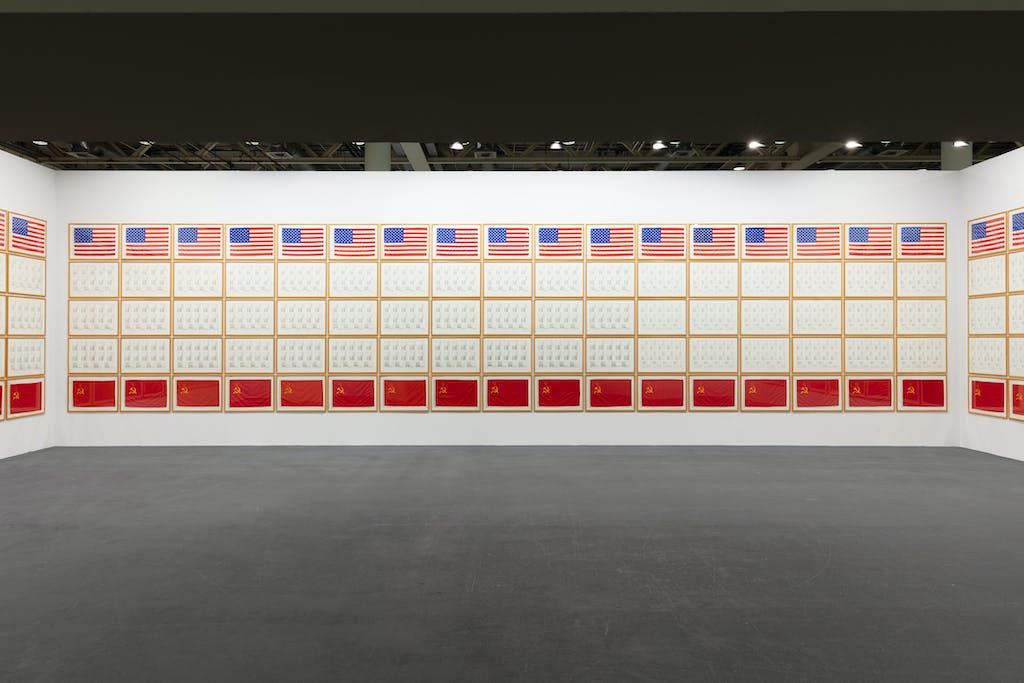 “Ost-West-Demokratie“ (1983) addresses the topic of the Cold War in the upper and bottom row, where framed flags of the USA and the Soviet Union oppose each other, as well as in the introductory column where smaller flags of the GDR and the FRG are framed together. This theme of contemporary history is connected with various biographical aspects of the artist’s life: Darboven’s birthday on April 29th, 1941, photographs and other personal notes like “in ruhe ein brötchen mit butter und marmelade essen“ (EN: “to eat a bread roll with butter and jam in peace“) appear in the outermost columns on the left and right of the work. Ernst Jünger’s name is mentioned together with the words “Heimat“ and “NS-Denken“ - a reference to the scandal caused by the awarding of the Goethe Prize to the controversial writer in 1982.

In the middle section, consisting of 36 columns and 3 rows, Darboven visualizes the passing of time between 1949 - the founding year of two separate German states - and 1983 - the year of the creation of the work. By numbering this span of years on postcards she creates a calendar structured in days, months and years. Each column represents one year which is mirrored in 42 postcards, each containing one of 42 possible cross-sums that can be counted from 365 or 366 different days of a year. This cross-sum system was developed by Darboven in the early 1970s and employed ever since to make the phenomenon of time visually tangible.

In this work, the number 42 is charged with another symbolic meaning: in 1983, when she created “Ost-West-Demokratie“, Hanne Darboven was 42 years old. The inscription “biographie, hanne darboven 1949->1983’ referring to her lifetime, the work intertwines personal and political history.

In 1969 Hanne Darboven was included in Harald Szeemann’s legendary exhibition ‚‘Live in Your Head - When Attitudes Become Form’ at Kunsthalle Bern and she took part in several editions of the documenta, Kassel. Her work was honored internationally in solo exhibitions held by renowned museums and institutions, such as the Museet for samtidskunst, Oslo (2000); the Museum Moderner Kunst, Stiftung Ludwig, Vienna, and Haus Konstruktiv, Zurich (2003); the Museo Nacional Centro de Arte Reina Sofía, Madrid (2014); the Bundeskunsthalle, Bonn, and Haus der Kunst, Munich (2015); the Dia Center for the Arts, New York (1996, 2016) and most recently at MKM - Museum Küppersmühle für Moderne Kunst, Duisburg (2020/21).