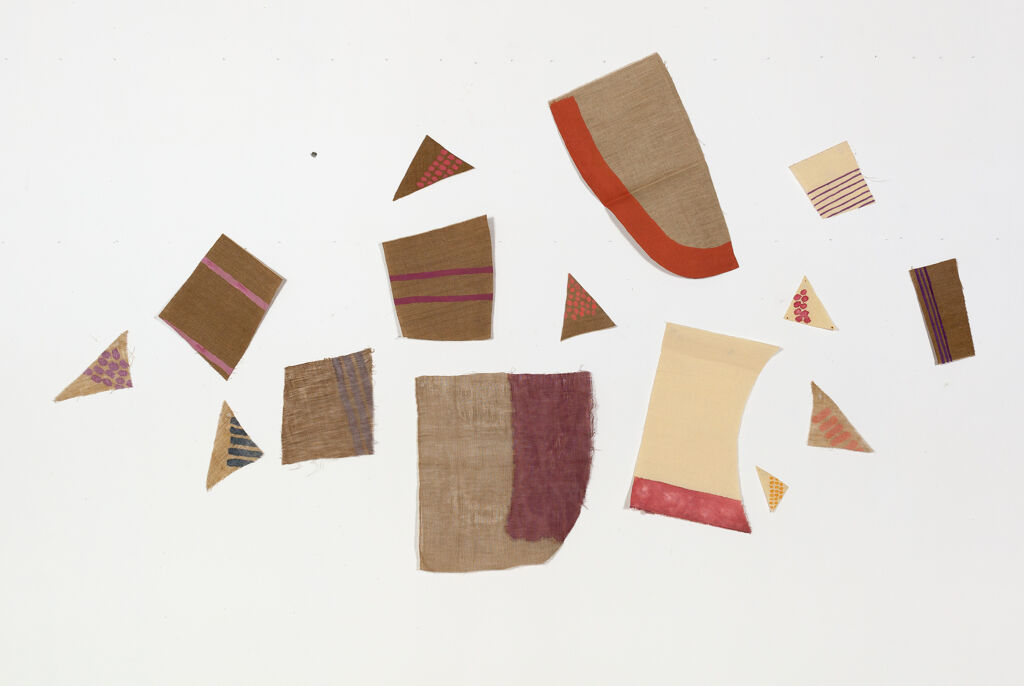 Giorgio Griffa occupies a singular position in the art world. Born in 1936 in Torino, where he still lives and works today, Griffa began in the mid-1960s to orient his painting towards abstraction. His treatment of paint and also his selection and handling of materials give eloquent testimony to Griffa’s investigations regarding the nature of painting, his own role as an artist, and fundamental questions of space and time.

Giorgio Griffa paints with acrylics on an unprimed canvas. His pictures are not stretched upon a frame but instead are nailed directly to the wall during exhibitions. If they are not put on display, the artist folds and staples the paintings. These folds remain visible in the exhibited works and are a part of the composition.

In the meantime, there are eleven cycles into which Giorgio Griffa organizes his paintings. None of these cycles has been definitively completed; they all coexist as ongoing variations. Individual works can be assigned to more than one cycle; according to Griffa, these are “lines of work that can intersect and merge.”

The first cycle consists of the Segni primari (“Primary Signs”); here simple signs or forms (strokes, lines, curves, waves etc.) are repeated and painted alongside each other on the canvas. They can be the same as each other and yet differ continuously in their execution. Already in evidence here are sudden and startling disruptions: Although Griffa, apparently abruptly, leaves a considerable portion of the canvas unpainted, an inherent rhythm is indicated and the mutability of the signs is represented. This rhythm structures not only space but also time in equal measure, and thereby also touches upon the realm of music. The slightly varying continuation of each series of signs is left open for further mental progression. In light of this openness, the artist’s decision to paint exclusively on unprimed canvas turns out to be entirely logical.

Further cycles shift the focus of Griffa’s investigations to other criteria that stand in relation to each other: for example, movement, reflection or fragmentation. In the 1990s, the selective cumulation of the key aspects of his cycles is complemented for the first time by numbers, as indications of sequential order within a cycle or within a picture. Finally, with the cycle Canone aureo (“Golden Ratio”) Griffa introduces into his œuvre the number 1.61803398874989484820…, which indicates a system of proportion and harmony that has been discussed ever since Antiquity. This is a number with an endless sequence of decimal places which, like the repetitions already present in other cycles, points towards the aspect of time and towards infinity. Written characters will come later in a discussion of identity.

The beginning of Griffa’s artistic activity in the 1960s occurred under the influence of the debates, initiated by Clement Greenberg, concerning Formalism and the self-referentiality of painting as well as the movements, new at that time, of Informalism, Minimalism and Concept Art. But his contact with artists such as Giovanni Anselmo, Mario Merz, Giulio Paolini, Giuseppe Penone and Gilberto Zorio has come to mean that Giorgio Griffa is often associated with Arte povera because of his use of material such as the unprimed canvas. This classification, as well as an association with Pittura analitica, is quite plausible; at the same time, however, Giorgio Griffa has always maintained an independent manner of working that lies outside specific movements.

From March 2022, Giogio Griffa will be honored with a retrospective at the Centre Pompidou, Musée National d’Art Moderne, in Paris.

Giogio Griffa’s oeuvre has been presented, among other places, at solo exhibitions at the following institutions: Musée d’art moderne, d’art contemporain et d’art brut, Lille (2021), Camden Art Centre, London (2018), Serralves Museum, Porto (2015), Centre d’Art Contemporain Genève, Geneva (2015), MACRO—Museo d’Arte Contemporanea, Rome (2011), Galleria Civica d’Arte Moderna e Contemporanea, Torino (2001) and Kunsthalle Düsseldorf (1978). Early on there were already solo exhibitions at the Sonnabend Gallery in New York and in Paris (1970) as well as at the Galleria Sperone (1969) in Torino. Important group exhibitions and biennials in which works by Griffa were shown took place at the Tate Modern, London (2019), at the Sezession, Vienna (2017), at the Kunsthaus Zürich and at the Peggy Guggenheim Collection, Venice (2009). Griffa participated in the Quadriennale di Roma (1986 and 1999), the Triennale India, Neu-Delhi (1986) and the Biennale di Venezia (1978, 1980 and 2017). There were further exhibitions at the XIV Biennale São Paulo, Brazil, and the Galleria Civica d’Arte Moderna, Torino (1977), the Museé d’Art Moderne de la Ville de Paris, Paris (1970) and, with “Prospect 69” and “Prospect 73,” at the Kunsthalle Düsseldorf (1969 and 1973).