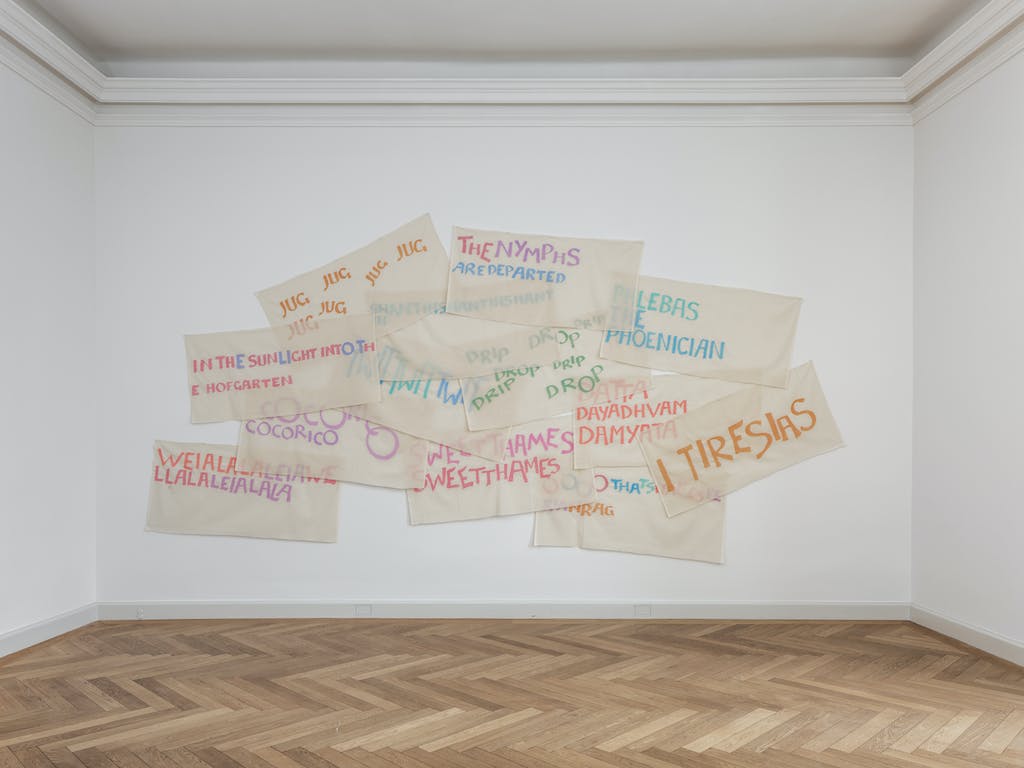 KEWENIG is presenting the first solo exhibition of Giorgio Griffa (*1936 in Turin, Italy) with luminous colours on matte canvas, with rhythm and with space-encompassing arrangements of paintings. The exhibition includes works done by the Italian painter from the early 1970s until today. This presentation seeks to direct attention towards an artist who, ever since the 1960s, has been conversant with the artistic discourse of his era and has developed a remarkable painterly position.

Giorgio Griffa paints with acrylics on unprimed canvas. His pictures remain unframed and are nailed directly onto the wall. If they are not displayed, the artist folds and stacks them. The visible creases are part of the composition and convey the great value that Griffa attributes to the material itself. His handling of material and color as well as his abstract formal vocabulary point towards a world that is characterized by reflections on space and time.

Over the entrance area and the staircase of the gallery extends Griffa’s work ’Quindici frammenti‘ (’Fifteen Fragments‘, 1980). Distributed across its surface are individual pieces of canvas that vary in texture, form and size. The individual segments enter into a loose association even as they simultaneously burst apart this connection and lay claim to the building and the surrounding space, in which they seem to be situated in free movement. The fact that no painted pictorial motif can be identified makes it possible to discern what Griffa’s manner of painting is capable of: The canvasses are no longer a neutral medium conveying the pictorial information but are instead an integral component of the painting, just as the paint is part of the figures that present themselves to view here. Material, paint and space achieve an equilibrium that comes to light in an impressive manner in this installational situation.

Frammenti is the title Griffa assigns to one of his cycles; altogether there are eleven of them. All of these cycles are open and never ended; individual works can be assigned to more than one cycle. According to Griffa, it is a matter of “lines of work that can intersect and merge with each other.” A further work featured in the exhibition, ’Trittico giallo‘ (’Yellow Triptych‘, 2019), evinces an affiliation with several cycles: first with the Segni primari (Primary Signs), in which simple signs or forms are painted alongside each other or in flowing progression upon the canvas. The work demonstrates the element that connects all three parts of the picture with each other, namely a wave- or scale-like structure in luminous yellow that moves respectively from the right across several rows upon the picture. This structure is accompanied by strokes done in bright colouring. The repetition of the signs establishes a rhythm that structures the canvasses, space and time—like a piece of music whose first measures are heard and which can then be played further. The fact that Griffa with apparent abruptness ceases to paint the canvas and leaves large sections of the canvas free creates the openness that is called for by the mental continuation on the part of the viewer.

For each of the three parts of the ’Trittico giallo‘, Griffa provides indications of further cycles through the titles he comes up with. For example, painted in the lefthand picture of the triptych are the digits of the number 1.61803398874989484820… This number describes the ’Canone aureo‘, the Golden Ratio, and thereby indicates the ancient system of proportion and harmony—a number with an endless sequence of decimal places which, as already before with the repetition of signs, points towards the aspect of time and towards infinity. The central picture is entitled and painted with ’Buoskokok‘, an incomprehensible, previously non-extant word. Here and with the cycle Shaman, Griffa goes back to the beginnings of human consciousness: Just as the shaman mumbles incomprehensible words in order to enter into contact with the unknown world, here words become images, form a path to that part of the world which theretofore was unknown and without identity. Finally, ’Bello brutto‘ is the title of the righthand picture on the triptych. Both words, along with their English translations “nice” and “ugly,” are painted with free line breaks multiple times over the breadth of the canvas. In their contradictoriness, they perhaps stand paradigmatically for the Dilemma (which is also the name of his eleventh cycle) that Griffa recognizes in his work and that he seeks to resolve through his painting. For example, he sees contradictions in the continuity of the path that must be traveled upon, as well as in the borders dictated by philosophy and by the format of the canvas.

’Quaranta tele‘ (2001) is a space-encompassing work, spanning two rooms and consisting of ’Forty Canvasses‘ that all have the same height but vary in width. To be read like a text from left to right upon the unprimed texture of the canvas is a succession of various signs, executed in bright, luminous colours. Griffa makes use of the borders of the canvas formats by transcending them and by beginning with each new canvas a fresh semiotic series that comes to an end one or two canvases further. He uses them in order to take the freedom of reacting to the space that he intends to capture. And he utilizes the sequence of individual pictures for the purpose of including the viewer. Because here Griffa has created a dynamic system that is suitable for transferring the energies of the creation of this work onto the energies of its perception. He keeps the gaze of the viewer in constant motion while he demonstrates the inexhaustible possibilities of this system: the mutability of the signs, their creation, their continuation, their end, their replacement by other signs.

The beginning of Giorgio Griffa’s artistic activity in the 1960s took place under the influence of the debates initiated by Clement Greenberg with regard to Formalism and the self-referentiality of painting as well as in response to what were at that time new currents of Informalism, Minimalism and Concept Art. But his contacts with artists such as Giovanni Anselmo, Jannis Kounellis, Mario Merz, Giulio Paolini, Giuseppe Penone and Gilberto Zorio have come to mean that Giorgio Griffa is often associated with Arte povera because of his use of material such as the unprimed canvas. This classification, as well as an association with Pittura analitica, is quite plausible; at the same time, however, Giorgio Griffa has always maintained an independent manner of working that lies outside specific movements.