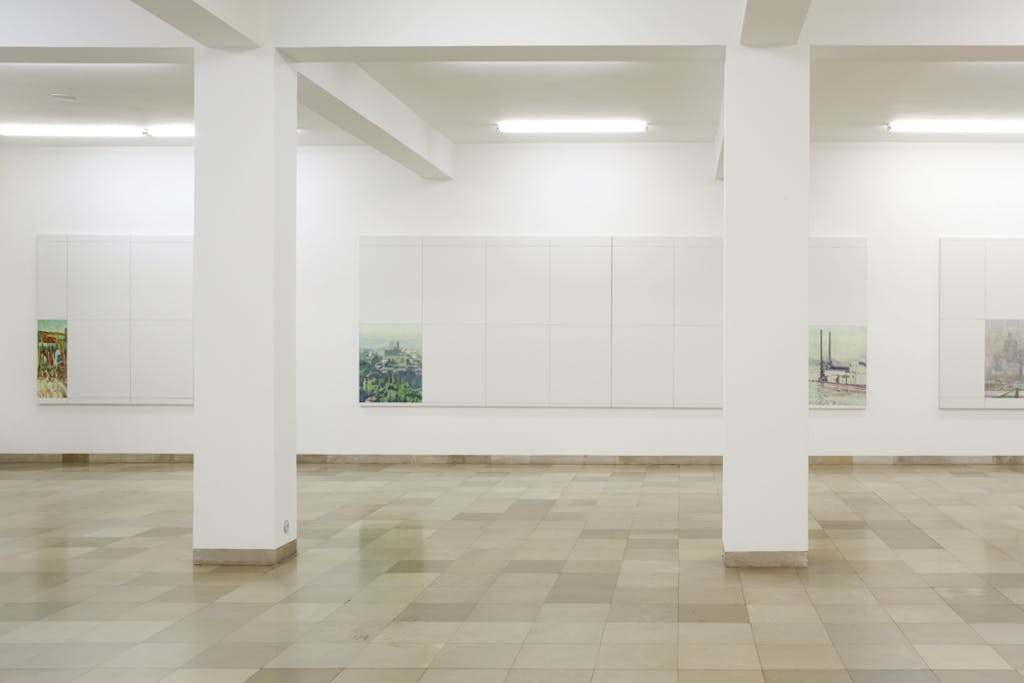 As the author of The Canon, Ilya and Emilia Kabakov name the fictitious artist, Charles Rosenthal. Born in Moscow in 1898, Rosenthal emigrated to Paris in 1922, where he died in 1933, Ilya Kabakov’s year of birth. Rosenthal's large, white-grounded canvases are subdivided by a grid of lines into uniform rectangles in portrait format. Like many artists, he seems to work with the square grid to compose his paintings, a method used to make large paintings according to small sketches. The surface of the painting remains largely white; in each one only one field of the grid, or sometimes two, is filled with seemingly impressionist landscapes or with social-realist figurative scenes. Whether in the case of the Canon scenes, it is merely a matter of details in a grid that still has to be filled out, remains an open question. Only the images in which more than one of the fields is filled in a painterly way allow the conclusion to be drawn, because of the congruent scale and subject, that also the remaining white fields still had to be filled. According to Kabakov, with the greater distance from Russia, it became increasingly difficult for Rosenthal to fill in the white patches of his paintings.

The imaginary biography of Rosenthal includes stays in 1920s Paris and allows various artistic influences to be surmised. It enables Ilya and Emilia Kabakov to dip into an artistic past which they themselves no longer experienced due to their later birth. In a mixture of nostalgia and distance, in Rosenthal's paintings, Russian art traditions from Malevich's realistic beginnings through to constructivism are revived, and experiences of exile of an artist emigrated to western Europe intermingle. The hallmark of realist painting widespread in the Soviet Union of the 1920s was a light background as a sign of hope and a positive new dawn after the revolution. In contrast to Rosenthal, Ilya Kabakov grew up in the Soviet Union at a time when there was nothing hopeful in the socialist system, but rather a prevailing atmosphere of oppression and pessimism. Perhaps for this reason he inverts the positive signs by defining the light background in the Canon cycle as emptiness.

In the basement of the gallery, a model and films about Kabakov's Ruhr Atoll project for Baldeney Lake in Essen are presented which is emerging within the context of the Cultural Capital RUHR.2010. Eight artists and artist couples have been invited by the curator, Norbert Bauer, to make temporary island projects for Baldeney Lake and the Ruhr in perambulating dimensions ranging from 150 to 300 sq. m. Ilya and Emilia Kabakov's Project for the Protection of Natural Resources shows a subtle ensemble on scientific investigations of water. Human intervention into nature and the method of investigation are completely adapted to contemporary demands of ecological sustainability, albeit only ironically and with tongue in cheek. With rattles and squeaks, and employing numerous machines and pumps from the post-Soviet region — a "stamped-out piece of my Russian homeland" — on the Kabakovian island, nothing is achieved other than pumping the water of Baldeney Lake from the left to the right. The Ruhr Atoll in Essen will open at the same time as the gallery exhibition and can be viewed during the summer by boat.