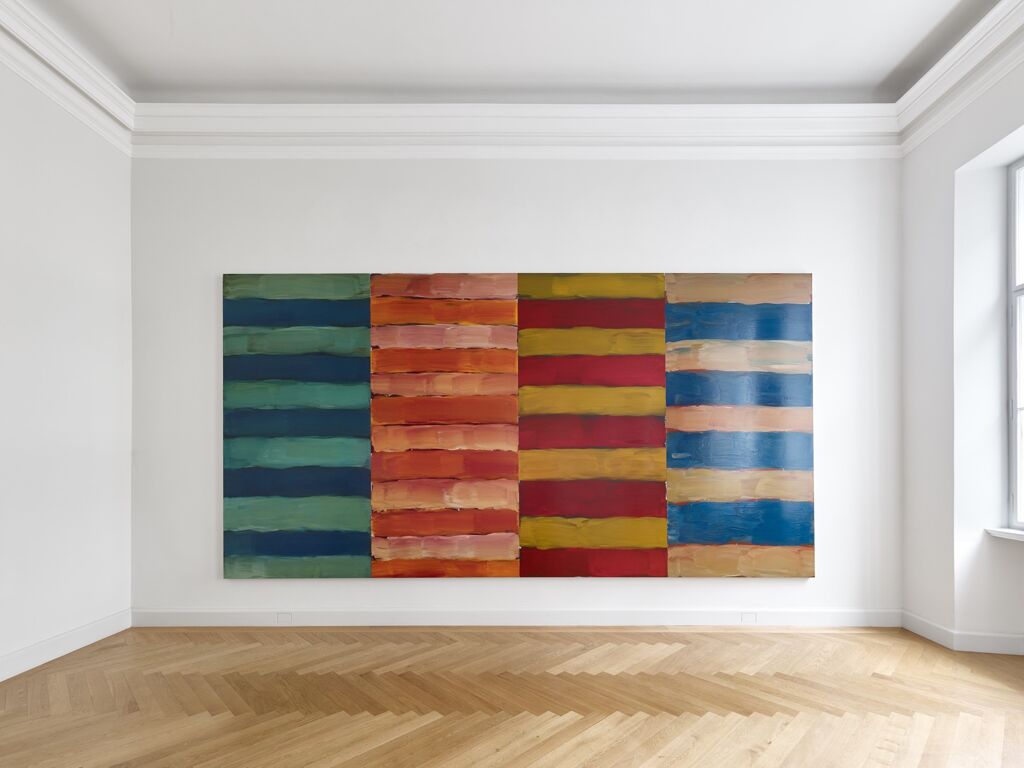 Kewenig is delighted to have the opportunity to stage a solo exhibition of the work of Sean Scully (b. Dublin 1945) in its Berlin gallery for the first time. “Four Days” features new oil paintings, a selection of pastels and one sculpture by the internationally renowned Irish-American artist. Among the works, the majority of which were executed especially for this occasion, is the four-part painting "Four Days" (2015) after which the show was named. The monumental triptych "Arles-Abend-Vincent 2" (2015), a number of new works from the "Landline" series, three paintings from the "Wall of Light" series, two pastels from the "Doric" series and the sculpture "Landline Cubed" (2015) offer insights into central workgroups as well as new tendencies in Scully’s oeuvre.

It was in 1998 that Sean Scully first called a painting "Wall of Light" after a watercolour he had executed in Mexico in 1983 – the year in which he took out American citizenship –, thus launching a body of work meanwhile encompassing more than a hundred works of similar structure. In "Wall of Light Red Blue" (2014), "Wall of Light Fez" (2015) and "Muro de Luz Rojo" (2015), all on view in the show, wide strips of color join to form square and rectangular modules, some placed horizontally, others vertically, and thus segmenting the pictorial surface. The glowing colours introduce a soft quality that serves to reconcile the rasterized body of colour. The contradictory quality of these “walls of light” arises from the two constitutive elements that give them their name, as aptly pointed out by Michael Auping: whereas walls are impenetrable and shield and enclose a space, light radiates and suffuses space. Scully fills the distance between these two polar phenomena with a further paradox – an unequivocal sensuality arising from the integration of the vibrant colours into the clear structure of the forms on a rationally permeated surface.

The triptych "Arles-Abend-Vincent 2" (2015) welcomes the visitor on the upper level of the “Four Days” exhibition. Adhering to a compositional structure similar to that of the "Walls of Light", it pays tribute to the light of the Southern French town of Arles already translated into undulating brushstrokes by Vincent van Gogh beginning in 1888. In the "Landline" series undertaken by Scully in 2013, four or more horizontal bands of contrasting colours coalesce in a vertical format. The paintings "Landline Blue", "Landline Pink Red" and "Landline Fire" on the upper floor (all of 2015) and the three pastel works from the "Landline" series in the room on the lower level evoke the horizontals of natural landscapes – the boundaries at which land, sea and sky meet – in modulations distinguished as much by tension as by equilibrium:

“I try to paint this, this sense of the elemental coming-together of land and sea, sky and land, of blocks coming together side by side and stacked in horizon lines endlessly beginning and ending – the way the blocks of the world hug each other, their weight, their air, their colour, and the soft uncertain space between them.”

In the “Landlines” in oil on canvas and oil on aluminum chosen for the exhibition, the rhythm of the hues breaks in different ways in the pictorial center: in "Landline Fire" the sheen of the oil paint is subdued by means of a variation in the red field in the middle, where it is applied with a roller instead of a brush. In "Landline Pink Red", the artist has painted the pink zone below the center much wetter, causing gradations of hue that create picturesque structures and expose the paint’s material properties.

The monumental work "Four Days" (2015) that gives the exhibition its name brings the presentation on the upper floor to a close with a chromatic chord consisting of four aluminum panels painted on four different days.

In the painting process, the application of paint in Scully’s works is ritualized by a balance of power between the painter and the canvas that discharges its potency in space and manifests as sensual experience. Now lucid, now impasto, the layers of paint cover one another and change the painting, sometimes beyond recognition, in the process of its execution. At the same time, earlier stages of the work’s development are preserved; they show through here and there at the edges of the color fields where the brush’s bristles and the wet-in-wet application of the oil paint structure and ventilate the surface.

Scully’s interest in the relationship between colour and light is as painterly as it is philosophical in nature, and it permeates his pastel works as well those in oil, if in an entirely different manner. The powdery texture of the pastel is capable of concentrating the light, of absorbing it and revealing it in a velvetiness that seems to transport the gaze into the depths behind the paper’s surface. Two pastels from the "Doric" series correspond to the sculpture "Landline Cubed" (2015), which translates the layering principle into three-dimensionality and thus forges a link to architecture.