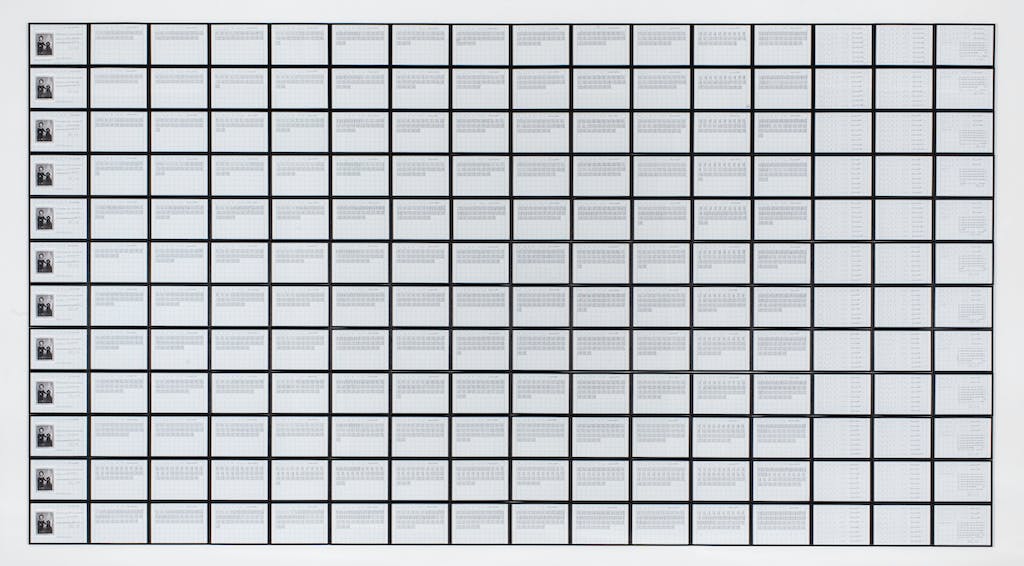 Hanne Darboven (1941–2009) is one of the most influential artists of the past decades. Her outstanding work is based on writing but ‘writing without describing’. Transcribing literary works like Homer’s Odyssey in manuscript form was a large part of her practice and various of her artworks incorporate a vast collection of different kinds of texts. In addition to handwriting or typewriting, Darboven made use of other techniques, like the collage or object assemblage, adding visual material representing the history of the 19th and 20th centuries. Her writing – mostly displayed on A4 pages or in books – resulted in several thousands of sheets of paper, revealing their space-encompassing dimension only when displayed in installations. They become a symbol and physical evidence of the lifetime and the energy expended in the act of writing. In some of Darboven’s works the time spent creating the work even equals the representative time span.

Darboven was reflective about current political affairs and started taking short notes of the most important daily events – political or personal – when leaving Hamburg for New York in 1966, which were then later included in her work. Oftentimes, Darboven intertwined political or cultural history with personal references, such as photographs and other personal notes, like ‘in ruhe ein brötchen mit butter und marmelade essen’ (eat a roll with butter and jam in peace) or inscriptions like ‘biographie, hanne darboven 1949->1983’ referring to her lifetime, and in the work ‘Ost-West-Demokratie’ (1983), while other works, such as ‘Hommage an meinen Vater’ (1988), are even dominated by personal content.

Living in New York for two years, Darboven came into contact with the leading artists of the then-emerging Conceptual and Minimal Art movements, especially Sol LeWitt and Carl Andre. It was also during this time that she began her series of ‘Constructions’, the basic, systematic structure that would set the tone for her entire oeuvre.

The most significant structural element in Darboven’s works is the chronological succession of written content, as if ‘writing along a timeline’, and, more specifically, the use of dates.

This is also the case in ‘Schreibzeit’ (1975–99), a vast collection of texts ranging from magazine articles or entries from encyclopaedias to poems. It includes relevant dates of political events and the names authors listed on their dates of birth or death.

A cross-sum system developed by Darboven in the early 1970s was employed by her to make the phenomenon of time visually tangible. Being universal and non-referential, numbers were used by Darboven as a means of marking out time and space; numbers were use not with calculation, but rather for counting.

In other key works, such as her first historical work ‘Bismarckzeit’ (1978), or ‘Kulturgeschichte’ (1980–83), Darboven gathered visual material like photographs, posters or postcards as well as objects like musical instruments, to follow the course of time both in calendric terms and in content. This allowed her to be oriented to the events of a certain period of time and to focus on issues of contemporary history.

Darboven had a great musical talent and in the 1980s she started to transfer her binary system into scores, thus composing mathematical music that she had recorded by professional musicians. The artist’s estate is executed by the Hanne Darboven Foundation, Hamburg, which she established herself in 2000.