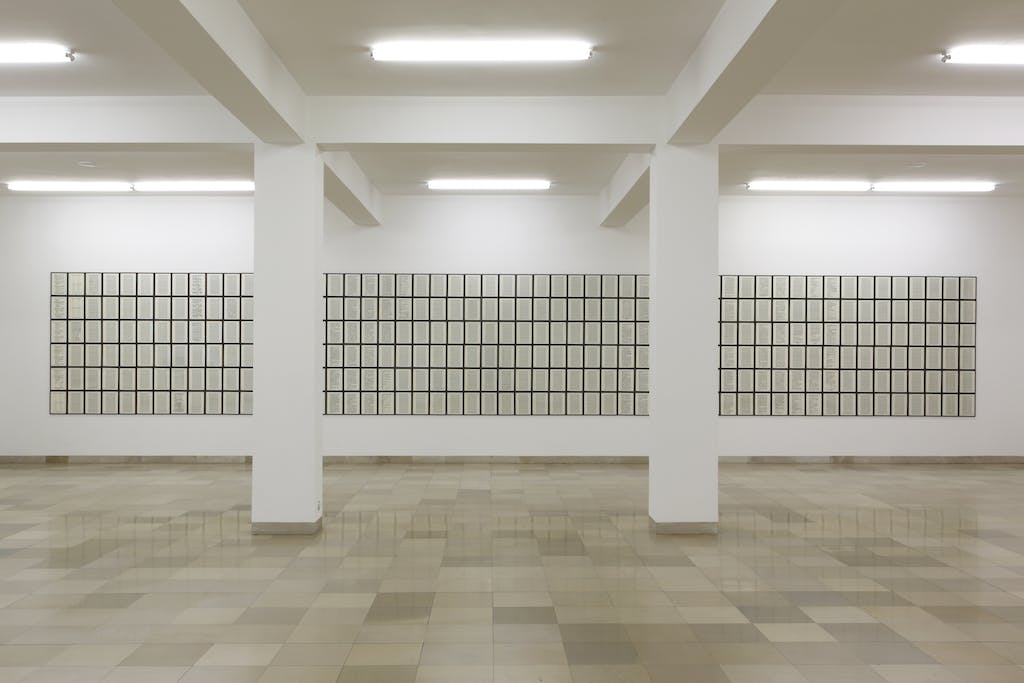 Hanne Darboven (1941–2009) is one of the most influential women artists of the past four decades. In 1966, she moved to New York for two years, where she came into contact with the leading artists of the then emerging Conceptual and Minimal Art movements, including especially Sol LeWitt and Carl Andre. It was during this time that she began her series of "Constructions", the basic, systematic structure of which would set the tone for her entire oeuvre. "The Sand" is the first

"The Sand" comprises 456 pages of framed, transparent paper, each measuring 29.5 x 21 cm. Each day of the year 1979 is represented by one or more pages. On the individual pages are handwritten texts from the most varied sources, including George Sand's "La Mare au Diable", the German Brockhaus encyclopaedia, lyrics by Karl Velentin and Marlene Dietrich, and the weekly political magazine "Der Spiegel". Other pages are filled with repeated swinging lines, which are reminiscent of handwriting but are completely void of content, meaning and syntax. Such "handwriting" also bears witness to a temporal process. As in all of Darboven's works, the writing in "The Sand" plays a dual role, namely as an independent, legible transcription of an actual text and as handwriting as such, i.e. as the abstract, conceptual result of a simple, rhythmic movement of the hand. The transcription implies, of course, that the artist has also read the text, an act that refers to yet another dimension of temporality and the passing of time.

The title of the work refers to the autobiography of the artist, who grew up in the Harburg district of Hamburg. As a child, Darboven lived with her parents for several years on the square named "Sand". This square was also the address of the "Colonial Goods and Tinned Food Store with Steam Coffee Roasters", which her grandfather J.W. Darboven founded in 1895. The work begins with an investigation of the word "sand". The artist transcribed all entries on the word "sand" found in the German Brockhaus encyclopaedia: George Sand, sandbox, sandman, sandglass etc. From "sandglass", Darboven switches to the headword "Chronos", which leads her, through a kind of free association, to the headwords chronology, writing and Hiroshima, which in turn leads her to interviews and texts on current political events in the German weekly magazine "Der Spiegel".