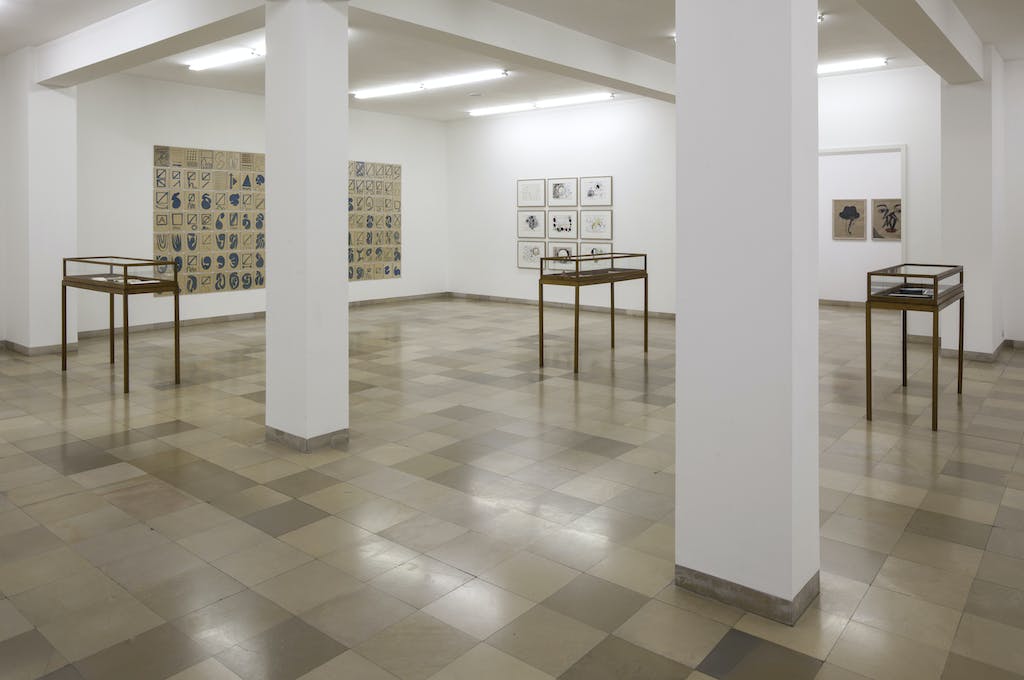 In the gallery's main exhibition room A.R. Penck (1939) shows the 147-parted Ink-Drawing-series Standart Nr.10 of 1970, in which he varies symbols and line drawings, resembling archaic symbols and named them as "Standart". Penck combines the terms "Standard" and "Art" into "Standart" to describe his own unique picture language on existential themes of humankind.

Also exhibited is Hommage an meinen Vater (Hommage to my father) of 1988 by conceptual artist Hanne Darboven (1941 - 2009). On 192 pages she has developped her own system of numbers, letters and words. She uses mathematical series of numbers to make the lapse of time visible. Each sheet contains a real day as well as a historical date of her father's life. Days, months and years form a mathematical system and demonstrate a mathematical encoding, which follows the cross sum.

A six-parted work in oil of 1977 by Imi Knoebel (1940) shows his technique of layering and of a reduced, emblematical technique. A bright blue, a light gesture and a fine black lining underline the minimalist intention of the artist.

Pavel Pepperstein (1966) as one of the most important representatives of contemporary Russian Concept art presents landscapes, which are closer and farer views into the cosmos. In his watercolors entitled Galaxy “Big Ammonite” (2011) or Hyperultragigantic White Hole in the center of the Space (2011) he comments in a lyrical way his view of the cosmos and its mystical characters.

His father Viktor Pivovarov (1937), member of the Classical Moscow Conceptualism, presents „artists' noses“ on thick brown paper, which are executed with a narrative joy for details to tell a story about the nose's bearer.

Marcelo Viquez (1971) who originally comes from Uruguay works with strong watercolours. In his drawings he illustrates elements of daily life using a subtile sense of humour to underline habits, desires, hopes as well as political and social nuisances of today.  As „Outsider“ Viquez views a reality full of contrasts and contradictions as if using a kaleidoskop: Elements get crossed out or are added by corrections, orthographic and syntactic rules of language are as well ignored as the hierarchically organized levels of a classical painting.

As well inspired by her Latin-American origin is the Chilean artist Sandra Vásquez de la Horra (1967) with her waxed pencil-drawings from 2011, in in which she shows myths and tales, religion and sexuality. Abyssal and morbid illustrations of the unconscious stand in contrast with tender mermaids and other feminine figures.

In the winter garden of the gallery the Belgian artist Bert de Beul opens key-hole like views in Black and White. Little still lifes and landscapes from the subjective view of the artist lead  into the deserted edges and angles of our world.