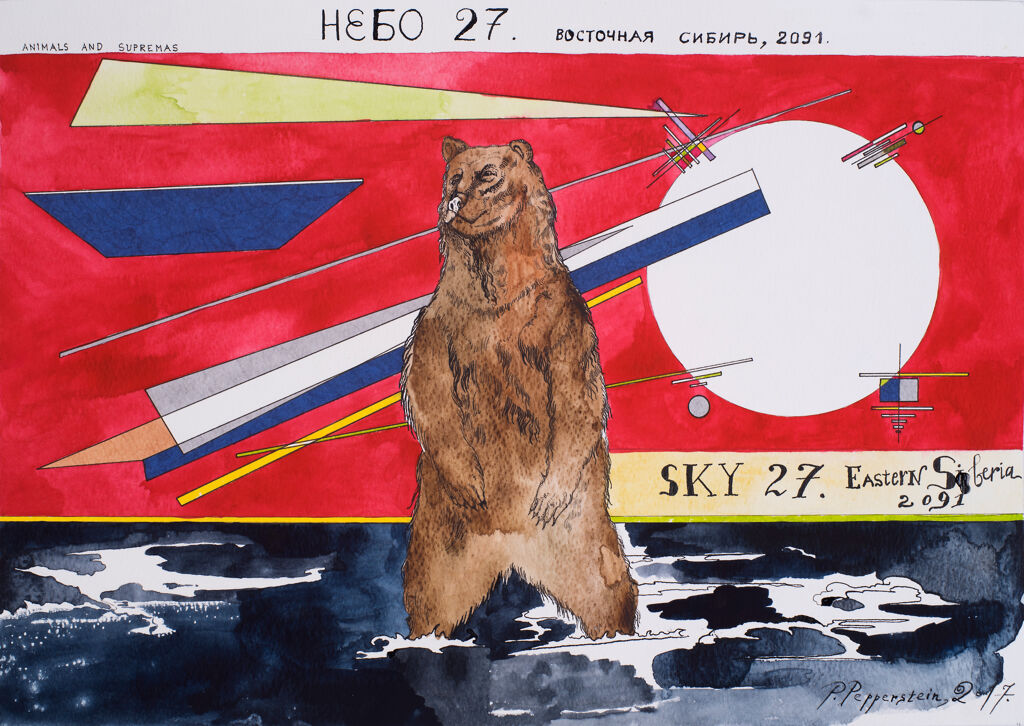 Artist, musician, theorist, novelist and film director, Pavel Pepperstein was born in 1966 in Moscow, where he continues to live and work. He studied at the Academy of Fine Arts in Prague from 1985–87, and shortly after co-founded the artist collective Inspection Medical Hermeneutics. Using watercolour, acrylic, ink and pencil, Pepperstein’s narrative works depict fictional and historical characters trapped in dystopian scenarios. Combining politics with science fiction and psychedelia, he builds colourful universes which are very much informed by Suprematism, Constructivism and Moscow Conceptualism.

Inspection Medical Hermeneutics was active between 1987 and 2001. The collective explored and interpreted meanings in Western and Soviet cultures at a time when the glasnost propaganda proposed some sort of openness. Politics remain at the core of Pepperstein’s creative process and he engages in his writings with the changes in Russian art since the end of USSR. A prolific maker of myths, he proposes alternative systems to our society, drawing maps of imaginary countries that exist in parallel dimensions – as Andrei Platonov described a fairy-tale Soviet Union in his unfinished novel 'Happy Moscow', censored by Stalin in the mid-1930s and illustrated by Pepperstein in 2017.

Pavel Pepperstein was awarded the Kandinsky Prize in 2014. His works belong to numerous public collections, including the Centre Pompidou, Paris; the Kunstmuseum Basel; the Kupferstichkabinett, Berlin; and the Israel Museum, Jerusalem, amongst others. Recent solo exhibitions of his works include the Garage Museum of Contemporary Art, Moscow (2019); the Multimedia Art Museum, Moscow (2018); Kunsthaus Zug (2017); the Russian Academy of Arts, St Petersburg (2016); and the Musée d’Art Moderne et Contemporain Saint-Étienne Métropole (2015).

The Human as a Frame for the Landscape, Garage Museum of Contemporary Art, Moscow, Russia

The Resurrection of Pablo Picasso in the Year 3111, Kunsthaus Zug, Zug, Switzerland

The Future Enamored with the Past, Multimedia Art Museum, Moscow, Russia