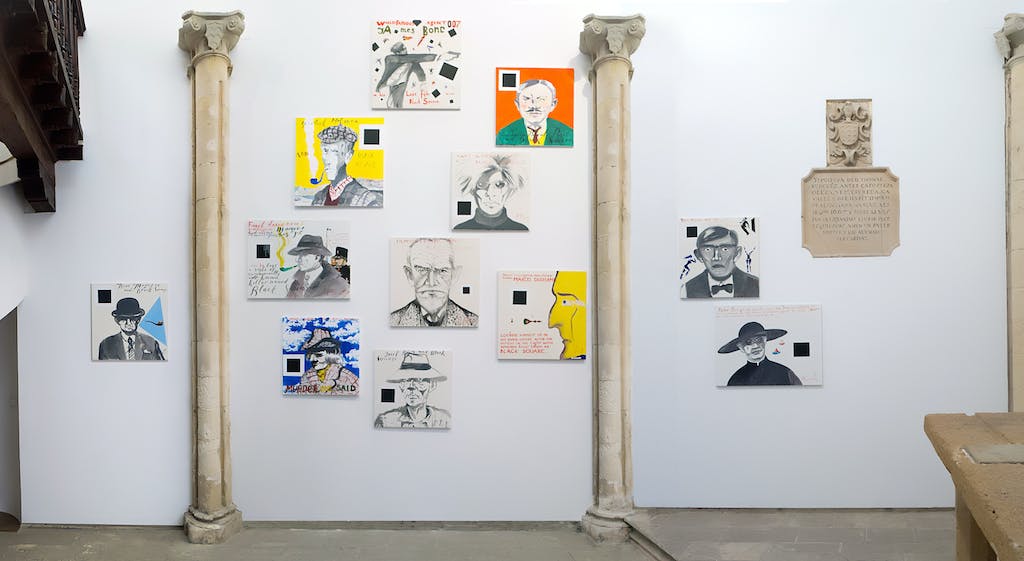 "Is it true that it sometimes becomes a space for crime?" The Black Square - Pavel Pepperstein's recurring quote on Kasimir Malevich's key work - now appears in company of murderers and investigators. For years, Pepperstein had developed the thought of making his own detective movie, and after having spent weeks with screening almost every single picturisation of Agatha Christie's murder mysteries and other crime classics he started a series of works on canvas and paper to process the seen, thoroughly employing his familiar verbal and visual language.

In Pavel Pepperstein's own words:

“For many years I wanted to make a movie of detective stories, in which a lucky killer would love to confess about deceived and destroyed investigators. Gradually, I began to mentally call this killer Black Square, although I didn’t particularly associate the killer in my mind with any of Malevich's paintings or his geometric images. I imagine different people in this role, and sometimes well-known actors, sometimes acquaintances, but often some characters that do not exist in reality. Years passed, and as I did not take any steps towards making the film, it continued to live within the realms of fantasy. Slowly but surely, the magic name - Black Square - penetrated deeper into the body of the killer, giving it some of the properties of the victim: as if the killer was absorbing the bodies of their victims, revealing that abstract beginning, which was built into the very foundation of the detective story. Perhaps, in Agatha Christie’s detective stories, this abstract and abstracted beginning has been identified with maximum clarity. First of all because in Agatha Christie’s stories the investigator, murderer and the victim gather together in one place and work together to act out the play, which should have delighted the soul of Malevich and Duchamp, as well as being appreciated by ordinary people. That mass adoration evoked by Agatha Christie’s stories, gives them a total mystery. Murder she said. Cosy Miss Marple only likes murders, and in this capacity she can be considered an ideal spectator for any work of art.”