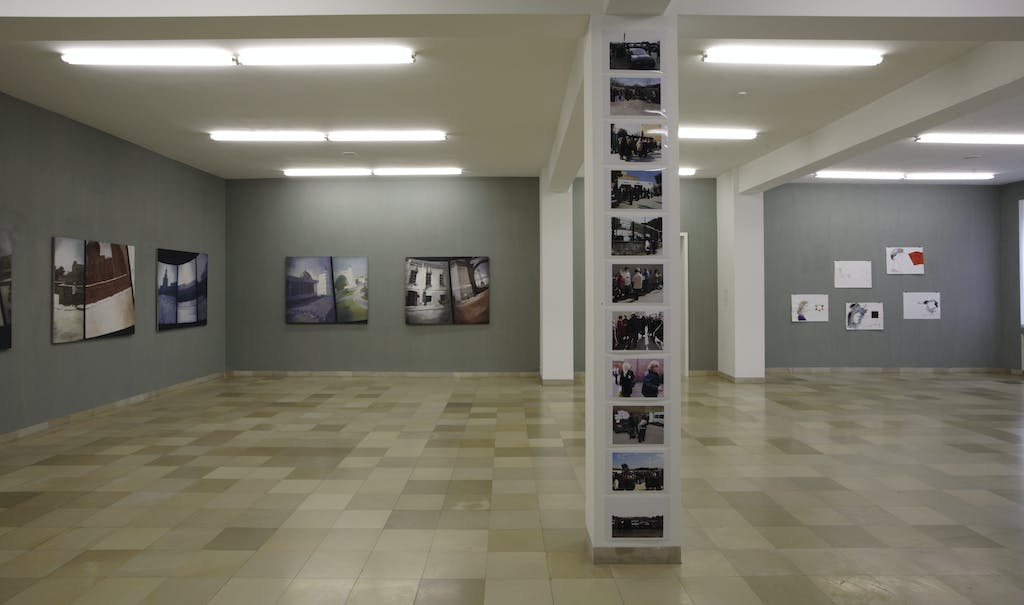 In the course of the installation of an "Alternative History of Art" in which Ilya and Emilia Kabakov recently presented Rooms no. 2 & 3 in the Kewenig Galerie Igor Spivak (born 1970) appears as the student and artistic follower of Ilya Kabakov. Igor Spivak is a fictitious artist. The Kabakovs have invented a biography of his’ and have also created an opus of painting which is still in its process of development. Now the Kabakovs pass on the exhibition to Spivak's generation. The young artists who were partly put forward by the Kabakovs themselves and now will be presented by the gallery are Ivan Bazak, Olga Chernysheva, Pavel Pepperstein and Christian Tomaszewski. All these artists show a critical handling in respect of experiences in their Soviet and post-Sovjet home countries as well as a distanced view on their past which arose during their sojourns in western countries

Ivan Bazak (born 1980 in Kolomyia, the Ukraine, lives in Cologne and Kolomyia) whose works were recently shown in a group exhibition of the Kunsthalle in Düsseldorf will bring together paintings, videos, photographs, texts and sculptures, which will form versatile excerpts of reality. In a local and also mental distance from his Ukrainian homeland Bazak looks back to landscapes, figures and sceneries with some kind of alienation but still affectionately. Paintings of a wedding, which will be shown in the Kewenig Galerie convey a feeling of human contact and intimacy. In a picturesque manner he renders a family celebration and his return to the festivities. Bazak's photographs of fellow countrymen who he photographed in Rome present a more distanced view. People looking for work, strange rituals and places demonstrate the differences to a life with western standards.

Olga Chernysheva (born 1962 in Moscow, lives there), one of the internationally most known Russian contemporary artists returned to Moscow after having spent some years in the Netherlands. Her paintings present images of former USSR cities and it’s monuments in a panoramic view. Films of touristic destinations, which were shown to the public since 1959 in the Moscow amusement park VDNKh in the (in former times groundbreaking) panorama technique on all round projection screens sampled for Chernysheva’s work. But in her images, the views get fragmented by black beams. They allegorically constitute the breach, which appeared in official images even before the demise of the Soviet Union.

Pavel Pepperstein (born 1966 in Moscow, lives there) is an artist and writer belonging to the youngest generation of Russian conceptualists. In the late 1980’s he was one of the founders of the artist group “Inspection Medical Hermeneutics” which formulated its critical distance towards current events in the subculture. In his watercolours Pepperstein analyses familiar images of mass culture as well as images of Russian fairy tales and myths while simultaneously transforming them into mysterious stories. The large-sized works on paper which will be created for the exhibition in the Kewenig Galerie refer to the student-teacher-relation of the generations Spivak and Kabakov. They also relegate to the personal, long lasting friendship between Pepperstein and Ilya and Emilia Kabakov as well as to the laws of art business not without a hint to the environment of the gallery.

Christian Tomaszewski (born 1971 in Gdansk, Poland, lives in New York) who will be represented with a single exhibition at the Kunstsammlungen Chemnitz in oncoming autumn, is famous for his installations of imaginary spaces. They are supposed to be the setting for mysterious goings-on that seem to be accessible only for insiders. Tomaszewski will use the basement vaults of the Kewenig Galerie for his installation, which includes reconstructed lamps that appeared in movies directed by David Lynch. They illuminate the rooms but still create enough shadow to evoke a mysterious and oppressive atmosphere, which is also known from the director’s movies. The beholder expects something to happen, his unease is intensified by the score of “Blue Velvet” which can be heard – and still it is all up in the air, you do not know if the beholder’s presentiments will come up to the real incidents in gallery’s basement vaults.