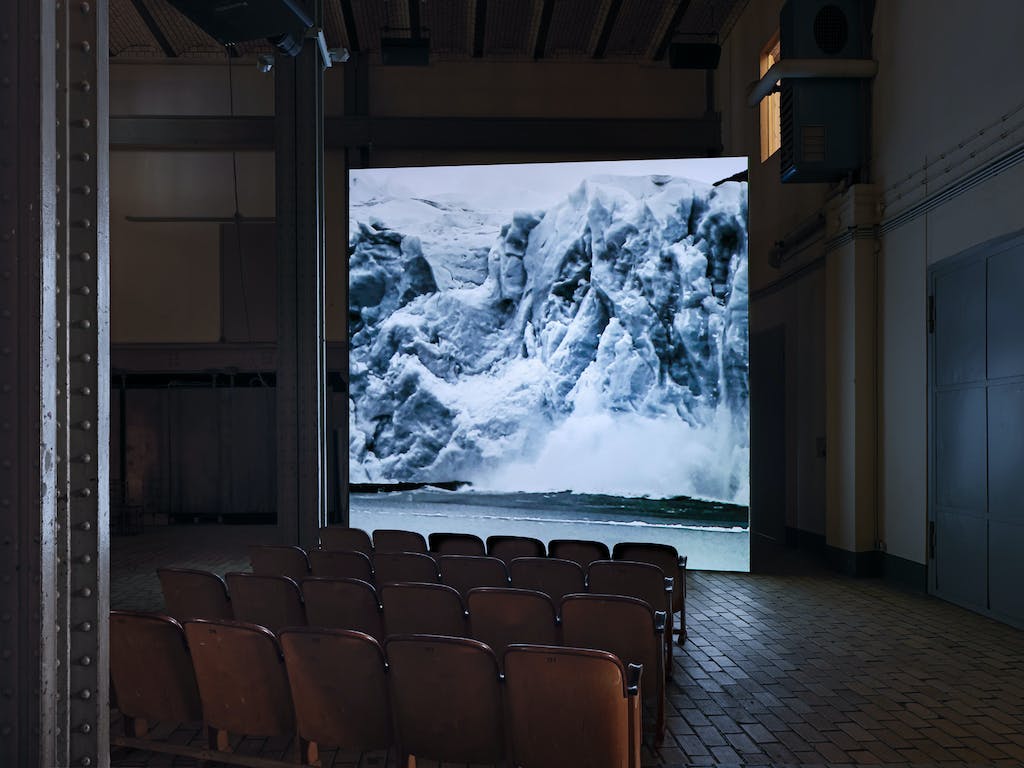 The artist Angelika Markul (*1977) is primarily fascinated by abandoned or overlooked, frequently perilous places. Her sculptural pieces, installations and her video works thematically focus on issues of time, memory, creation and destruction, becoming and decay as part of the life cycle. She combines science with fiction and, by means of her narratives, constructs myths that touch on the fundamental questions of humanity and lend her works a spiritual quality.

With her large-scale video installation Memory of the Glaciers, Angelika Markul has created a myth that tells of the origins, evolution and life cycles of humankind. The work begins with black-and-white footage of the comet Churyumov-Gerasimenko, and then transitions into aerial videos of glacier landscapes filmed in El Calafate, Argentina, in southern Patagonia. Markul, by editing the film material and inserting animations – with Côme Aguiar’s suggestive music accompanying the whole – choreographs a sequence of landscape impressions that expand into a gigantic panorama.

The glacier is melting. The layers it reveals make the history of the earth visible. You can see rocks, coastal waters, shelves of ice crumbling. The landscape presents only slightly nuanced tones of colour, pale blues and browns, frozen in often bizarre structures. These images, some taken from a bird’s eye view, some from a human perspective, are poetic, but at the same time disturbing in their drastic depiction of destructive forces. Already in Markul’s editing of the images of the comet at the beginning of the video, she unfolds a narrative construction of us finding ourselves confronted by a celestial body that might contain the secret of the origin of the world. In further animations, she either allows a black, organic mass to engulf the landscape or has the barren landscape sparkle as if covered in stars, creating, in this way, striking and ominous scenarios.

The images of melting glaciers, which can be found at various locations on earth and reveal dramatic changes in the climate and our habitat, are tragically beautiful. Creation and decay, birth and death are equally preserved in the rocks of the earth and the ice of the glaciers. Angelika Markul zeroes in on their hidden secrets without revealing them. She succeeds in achieving this with images in which riddles abound, riddles that cannot be solved.

This video work from 2017, which has previously been shown under its French title La mémoire des glaciers, is the first part of a trilogy that Angelika Markul completed with the videos Bepicolombo and Marella in 2020.