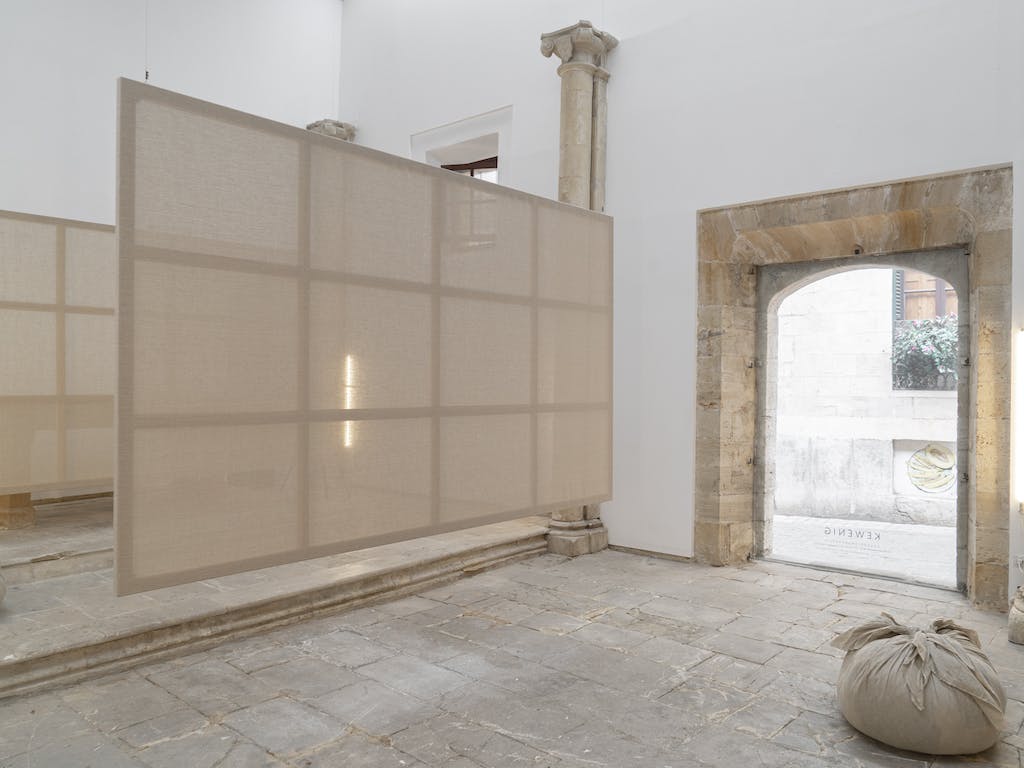 Three stretched but unpainted canvases hanging freely in the room, as well as three bundles of the same fabric of natural fibers distributed on the floor, are works by the Korean artist Kimsooja that KEWENIG Palma is showing in the Oratori de Sant Feliu as an installation titled Meta-Painting.

Kimsooja (b. 1957 in Daegu, South Korea), has been working with a number of different media since completing her studies: sculpture, installations, performances, and video. Her work revolves around the subjects of migration, cosmopolitanism, and transculturality. Shaped by her own path through life, she explores the concepts of homeland, of constant searching, and memories. And the relationship of nature and daily life, of painting and material, are the themes of this exhibition.

The bundles are bottaris—traditional Korean bundles for travel—they are an essential part of Kimsooja’s œuvre. They contain clothing, household goods, objects one needs to travel and to live and wants to bring along. In Kimsooja’s work, the filling and closing of the bottaris already plays an important role. She too fills bottaris with material belongings. But with the gesture of folding and packing the clothes, stacking and arranging other clothing with them, artfully bundling and knotting the whole, Kimsooja is adding something immaterial: thoughts, feelings, and memories, both painful and beautiful, fleeting and formative.

Her earlier bottaris are striking for their brilliant palette and silky-smooth, artfully embroidered fabrics. The bottaris in this exhibition, however, are made from the same grayish canvas in its natural state that is spanned on the stretchers. Kimsooja thus, first, relates these bottaris directly to the stretched Meta-Paintings, even apart from their proximity to one another in the spatial arrangement. And, second, she directs the focus on what remains invisible, that which is materially wrapped and immaterially hidden.

The compositions of the material points to nature and agriculture. The fabric that is hanging in the space as a support and of which the outermost layer of the bottaris is made is composed of flax that Kimsooja had planted, harvested, processed, and woven on the occasion of her exhibition at Wanås Konst Sculpture Park in Sweden. The clothing was collected locally. Having being created in a direct relationship to the placing and after passing through numerous processes, the works now stand here, in the Oratori de Sant Feliu, in a new spatial context, but at the same time they retain the history of their making and of their journey to Palma.

The title of the exhibition of the works shown in it, Meta-Paining, should be stood in a way similar to relationships based on a metalanguage. It is about painting that is not executed. It is about painting that addresses painting without need for paint. It is not-doing that, very much in the spirit of John Cage, nevertheless produces a result that can be perceived and in the process acquires a particular spiritual depth. Kimsooja leads exhibition visitors to the point of departure of a journey whose destination is nothing less than gaining insight into our existence and the world in which we live.

KIMSOOJA AT THE OKU-NOTO TRIENNALE 2020+