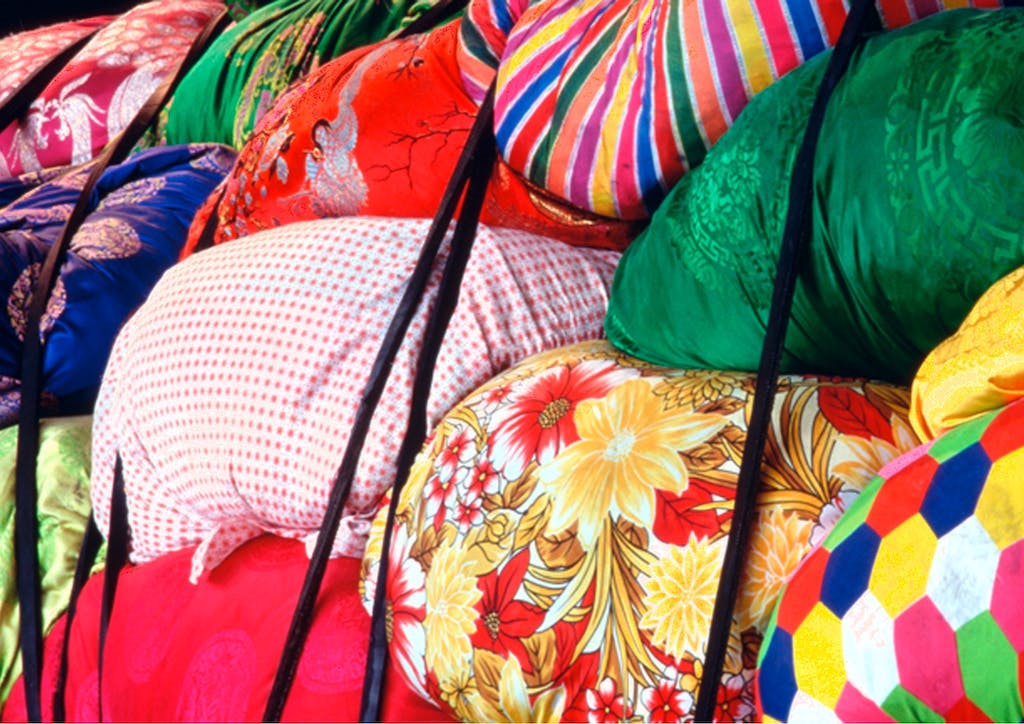 Korean conceptual artist Kimsooja (born Soo-ja Kim in Daegu, 1957) has chosen to combine her name into one word as an anarchistic action. By not separating her family name and her first name, the action evades gender and marital status in the Korean context.

For more than thirty years, Kimsooja has dedicated her oeuvre, in which she uses a vast variety of media, to the themes of migration, cosmopolitanism and transculturalism. Since the beginning of her artistic career in the 1990s, she has lived a nomadic life – constantly travelling between continents – which became a major theme in her creative process. The artist investigates the concept of home, locating it not as fixed to one particular place, but rather as mutable and subject to continuous fluctuations.

Kimsooja’s exploration of dislocation often makes use of bottari, which are traditional Korean bed-covers made into bundles and employed throughout all classes to wrap and protect one’s most important belongings during transit, often when moving from one’s place of origin. Since creating her first bottari in 1992, during her residency at MoMA PS1, Kimsooja, has made use of them in various site-specific contexts. The concept of the bottari gradually evolved and has infused her entire oeuvre: in some of her ‘Deductive Objects’, for example, bottari cloth is used to wrap everyday objects. Since her exhibition at Madrid’s Palacio de Cristal in 2006, the premiere of her legendary installation ‘To Breathe’, various locations like the Korean Pavilion at the Venice Biennale (2013) and the Centre Pompidou, Metz (2015), have been wrapped in colourful, light, entering the buildings through translucent, light-refracting film, thus blurring inside and outside world. ‘Archive of Mind’ (2016), the artist’s meditative participatory installation, invites visitors to form spheres of clay between the palms of their hands, and is also based on the concept of bottari.

A continuation of this concept is ‘Bottari 1999–2019’ (2019). The over-six-metre-long shipping container is filled with the artist’s personal belongings, from her house in New York where she lived for twenty years. Painted in the bright colours of the traditional Korean Obangsaek spectrum, white, black, yellow, blue and red, it references not only Kimsooja’s life as a nomadic artist, but also the freedom of mobility and choosing one’s home. The colours of the Obangsaek symbolise five cardinal points (north, east, south, west and centre), as well as five natural elements (wood, fire, earth, metal and water), which the artist has explored in her series of video works ‘Earth–Water–Fire–Air’ (2009–10).

For Kimsooja, life is interlaced with art and vice versa; the concepts of sewing and weaving are at the core of her artistic expression. The structure implied in the textiles she has been using in her works since the 1980s also represents her way of seeing herself in the world: man and nature interweave in a structure of horizontals and verticals. In her video performance ‘A Needle Woman’ (1999–2001; 2009), the artist conceives her own motionless body as a needle sewing the fabric of crowded places in Tokyo, Delhi, Mexico City or Paris. In her outstanding solo exhibition ‘Sowing into Painting’ (2020) at Wanås Konst, Sweden, Kimsooja’s concerns with painting, textiles and nature come full circle within an on-site flax cultivation, tracing the manufacturing process of painting, and its conceptual link to her ‘Meta Painting’ installation of raw canvases.

Kimsooja in the city of Poitiers, France