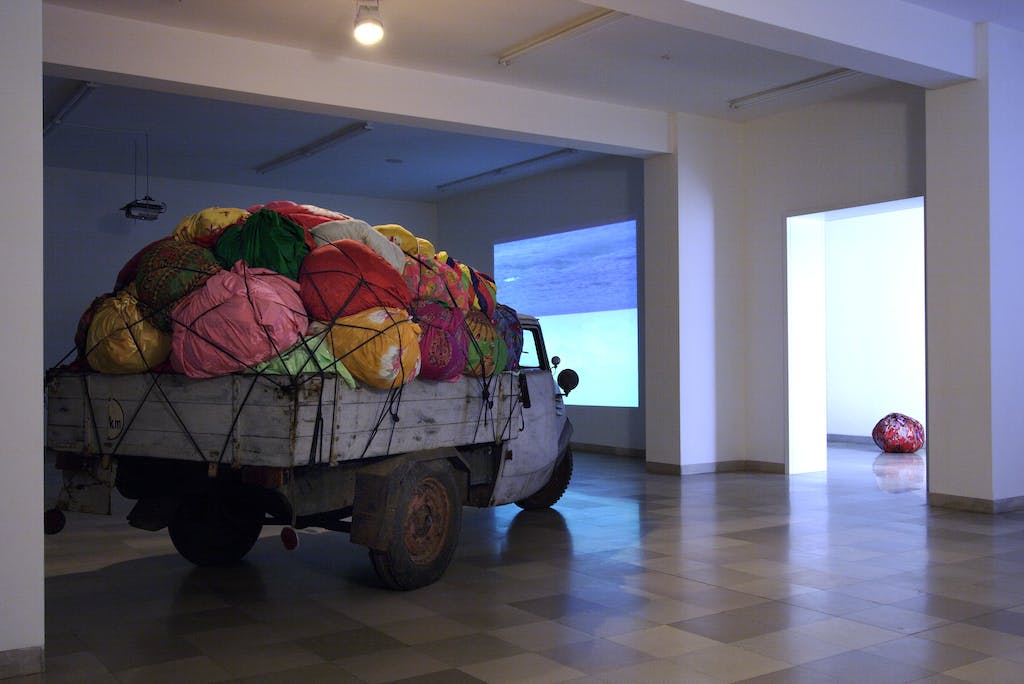 In the center of the exhibition hall of the Kewenig Galerie a small Tempo-truck of 1938 is piled up with colorful Bottari by Kimsooja. The Corean artists, who lives in New York, is best known in Germany since her single show at the museum kunst palast at Düsseldorf in 2004. The Bottari, wrapped up used clothes in richly colored traditional Korean bedcovers, play an important role in her work. Their fabric occupies a deeply symbolical position in Korean culture, as actual fil rouge that connects together all the most relevant events of life: it is used to wind newborn babies, to celebrate weddings, to cover the ill and to wrap up the dead.

These sculptures are inevitably linked to an issue like global migration and to the theme of the journey in general. The Bottari Cologne installation, being shown in the Kewenig Galerie reminds of the artist's performance Cities on the Move (1997), when KIMSOOJA drove a truck full of Bottari through several Korean villages. This work was then also presented during the 1999's Biennale di Venezia. The Tempo-truck, being shown at Kewenig's could be historically related to German history with its fugitives' tracks.

Additionally KIMSOOJA presents four Bottari films at the Kewenig Galerie. Since long the artist uses this term not only for the textile bundles but takes it over for her media art as an expression for concentrated human experiences and emotions of every single one, personally and in society. In Bottari – Alfa Beach KIMSOOJA presents the surf of a calm sea in front of a deep horizon head first. Like waves also seem hundreds of people in Bottari – Zocalo, the second of the toneless loops. The individual is only a coloured dot and no longer to be identified within the anonymous mass. The Bottari - Thunderstorm shows a nowadays rare picture in times of 24-hours TV presentations and improved transmission techniques – an empty screen evokes the impression of silent snow falling down. Real snow falling down from a cloudy sky is presented in Bottari – Snow, the last of the four loops.

Down in the basement the exhibition is continued by single Bottari and groups of two and three Bottari . The internal part exists of used clothes, being donated by people from Cologne and carrying their own history of usage and their users.