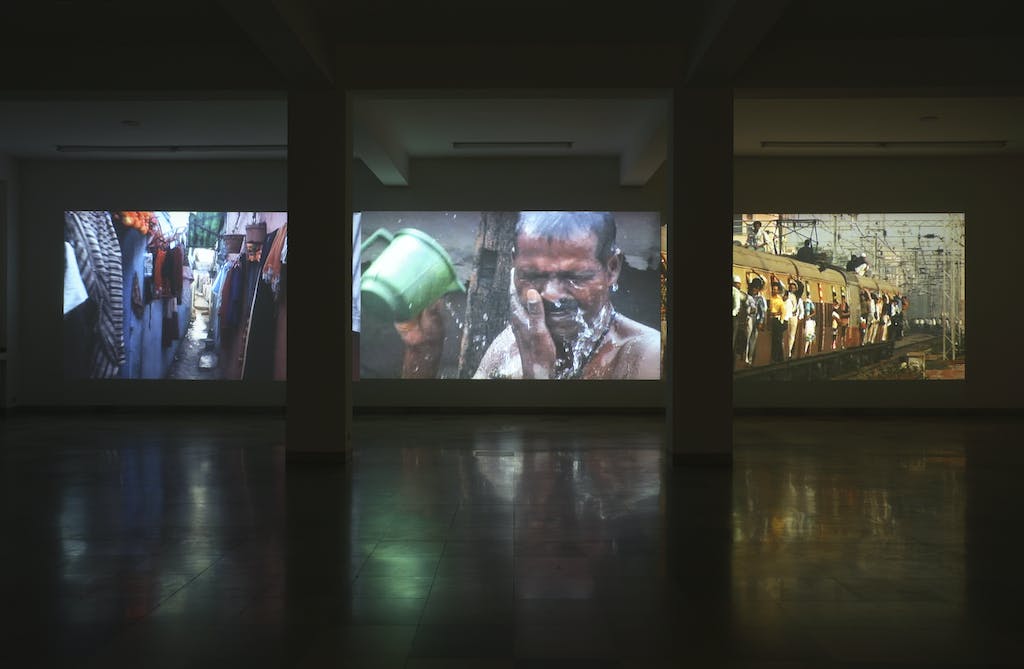 The Korean artist Kimsooja (born 1957 in Taegu, currently living in New York) began to incorporated fabrics into her work during the early 1980’s, which are used as a part of private everyday life in her home country. Made of bright colours and decorated with symbolic embroideries, people use them traditionally as bedcovers, but also to wrap the bundle to carry personal belongings. Detached from the utilitarian context, the colourful fabrics develop aesthetics of their own and become a universal symbol of life itself. While the character of the object was in the foreground at first, the human body itself became the object in space and time in the installation "Sewing into Walking", in which the artist moved her body as a symbolic 'needle', connecting between the bedcovers. The series of videos "A Needle Woman" (1999-2001), and "A Needle Woman" (2005), were filmed in cities around the world, where the artist's body is the central figure, visually present as a fixed point in the flow of the passing crowds.

Always on the move, Kimsooja develops her installations, performances, videos and photo-works by observing and juxtaposing different cultures and human conditions, as well as a structural investigation that has evolved in parallel throughout her practice.

After presenting the impressive installation of the Bottari Truck in her exhibition "Bottari Cologne 2005", it is now the latest work of the artist to be shown in the Kewenig Galerie. The 3 channel video projection "Mumbai: A Laundry Field" was created in the Indian city of Mumbai, former Bombay, in recent months, as a continuity of her series of "A Laundry Woman".

In one of the three-channel projections, the camera takes the viewer through the alleyways of various slums of Mumbai. The living conditions that prevail in the different slums have their own structure, as well as their own specific religious communities. Though in some quarters Hindus, Muslims and Christians live in the same community, the parallelism of the different cultures remain. You find slums in which human dignity seems to be irrelevant and in which people, obviously ignored and abandoned by the rest of society, dwell – some living in cots - amidst the stench of trash and waste of bad plumbing systems. But even these areas appeal to the foreign visitor aesthetically, because of their colourful laundry hanging on walls and in narrow alleys. They are perceived as places that are – though inhuman conditions predominate – affected by zest for life.