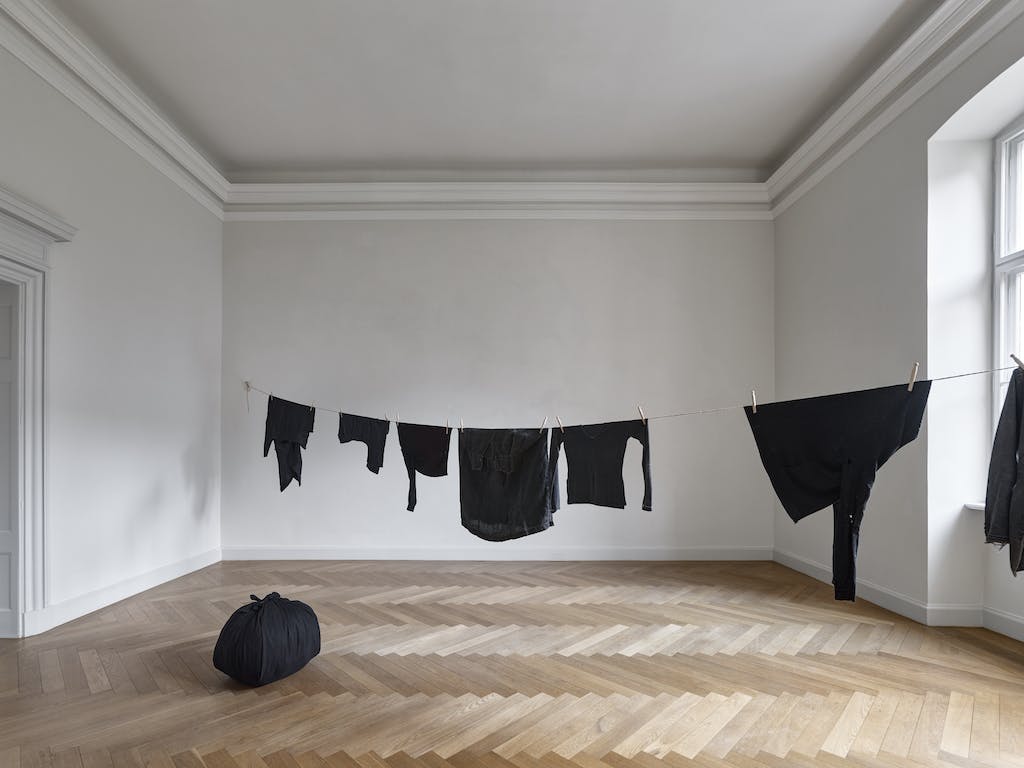 Kewenig is pleased to open the exhibition “Geometry of Breath” by Kimsooja on the occasion of the Gallery Weekend. The exhibition was planned by Michael O. Kewenig together with Kimsooja. Due to his recent passing away Kimsooja dedicates her exhibition at the Kewenig Gallery Berlin in commemoration of the gallerist.

The conceptual artist Kimsooja (born in 1957 in Daegu, South Korea) lives in New York, Seoul and recently in Berlin. For more than thirty years, she has dedicated her oeuvre to the themes of migration, the human condition and issues of the displayed self. In installations, performances, sculptures, videos and photographic works, she responds to the human condition with investigations into current cultural and political phenomena such as migration, cosmopolitanism and transculturalism in an increasingly globalized yet destructive world.

The exhibition “Geometry of Breath” contextualizes Kimsooja’s last 10 years of work that focus on the corporeal aspect of her practice. The exhibit begins with the installation "To Breathe: Mandala“ (2010), a readymade American jukebox, which amplifies the artist’s breathing sound performance, “The Weaving Factory” (2004). The jukebox presented on a painted wall, together with the breathing and humming sound from the speaker, symbolizes and becomes the artist’s body, mandala. Kimsooja leads us to a hypnotic and meditative outer space and timelessness.

The black "Bottari“ (2017) line the historical stairway leading to the upper level of the exhibition. Kimsooja first tied together Bottari (Korean for “bundles”) in 1992 during her time as artist-in-residence at the MoMA PS1; since then, she has repeatedly taken them up anew as an artistic evolution an das a signature, each time in a site-specific manner in response to the personal and social condition around her. In commemoration of Michael O. Kewenig, one of the Bottari is comprised of his clothes and personal belongings. Traditionally in Korea until well into the twentieth century, Bottari gathered a person’s most important possessions into a wrapping cloth (in Kimsooja’s work, used bedcovers) often when a native place had to be left behind. “Homeland,” says the artist, “is no topographically definable place but a state of consciousness and belonging.” Wherever Kimsooja finds herself to be, her body is simultaneously her studio and her home. In these new works, the borders between her body – as the space where new ideas arise – and the works themselves become increasingly blurred.

In the vestibule of the upper floor of the exhibition Kimsooja exhibits a selection of her recent print series “Topology of Time” (2016), which are produced from a collection of the artist’s hair since the early 90s. The hair functions in the pictorial space simultaneously as drawing and an instrument for measuring time. The fingerprints in the prints "Geometry of Body“ (2013-2016), on the other hand, come from a security checkpoint at the American-Mexican border crossing Mariposa Land Port of Entry. In the framework of the U.S. GSA Art in Architecture Program 2013, Kimsooja installed large-format video portraits of border residents of Mexican descent living in the US – directly above the high-security zone of the controversial borderline – to offer a gesture of greeting to migrants who passed through the border daily. The abstracted fingerprints, once symbols of identity, now reference the lines of a topographic map.

The adjacent room contains “A Laundry Woman,” where the artist’s clothing, which after many years of wear show traces of her body, are installed on a clothesline. Next, a visitor reaches the print and video work “An Album: Havana” (2007), a panning shot in which bodies of anonymous passersby are blurred and disappear into the wind as the focus softens. Four prints from the video work are installed above the staircase.

In the third room on the upper floor, one encounters the sculpture “Deductive Object” (2016), Kimsooja’s first plaster-cast of the artist’s arms and hands exhibited on an antique wooden table. The casting captures the artist’s hands as her index fingers meet her thumb constructing a void within the hand. This work is installed alongside “One Breath” (2006 / 2016), a digital embroidery of the sound waves of a single breath from the artist’s “The Weaving Factory” (2006) sound performance, as well as “Geometry of Body” (2006 – 2015), a yoga mat that the artist had used for nine years until it held the impression of her body as a painting. The three works correspond to the clay spheres – relics, “Deductive Object” (2016), which reference the major work “Archive of Mind” (2016) at Kimsooja’s solo exhibition at the MMCA Hyundai Motor Series 2016. In what is the artist’s first interactive installation, over the course of the exhibition visitors are invited to sit around a 19-meter-long elliptical table and shape balls of fresh clay between the palms of their hands, accompanied by a sound performance (“Unfolding Sphere”) of rolling clay spheres and gurgling sounds by the artist.

In the final room of the exhibition, the video work “An Album: Hudson Guild” (2009), commissioned by More Art, inquires into the changes and subjective conditions of spatial and temporal perception in old age. In the video recordings of the senior citizens from the Hudson Guild center in the Chelsea district of New York, the artist focuses on the phenomena of memory loss and detachment from reality, while remembering her deceased father, who suffered a stroke. The portrayed individuals are immigrants from Latin America, Europe and Asia, who are increasingly being forced out of Chelsea due to rising rents. In the photograph produced on the occasion of the exhibition and titled “An Album: Hudson Guild” (2009/2017), they gather into a group portrait of America – as a country of immigrants.

In the warehouse of the gallery in the district of Moabit, Kewenig is installing Kimsooja’s video-performance “Bottari Truck – Migrateurs” (2007), in which the artist was conveyed through the streets of Paris as a journey for commemorating "Sans Papier" to the Eglise Saint Bernard where immigrants without documents protected themselves in the early 90s. Upon the loading area of the warehouse, the pick-up truck complete with her paradigmatic Bottari is installed. The work was conceived at the Artist-in- Residence Program at the MAC/VAL (Musée d'Art Contemporain du Val-de-Marne) in an outlying district of Paris, where immigrants from Asia, North Africa and Southern Europe live.