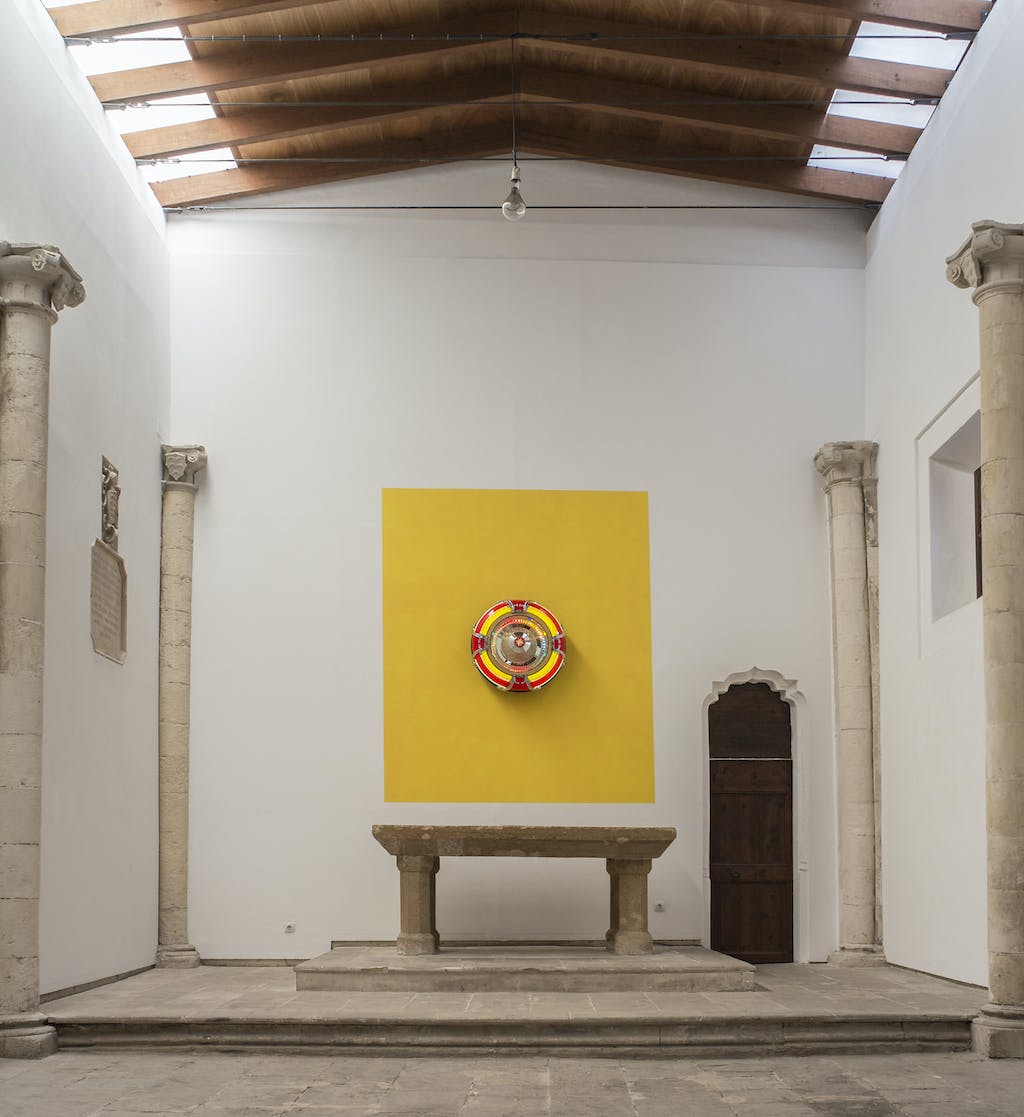 The Korean artist Kimsooja (born 1975 in Taegu, South Korea) lives and works on 3 continents. New York, Seoul and Paris. As part of a renowned globally active art scene her life is strongly determined by the process of mobility and migration. Living in New York she describes herself as an exile Korean, her nomadic lifestyle a continuous and dominant expression within her body of art.

Her personal subjective perceptions and encounters are transformed in her conceptually inclined artworks towards universal topics of humanity and its ever more tilt towards globalisation and the resulting weave of cultures. With an unmistakeable aesthetic clarity the multi media artist combines performance, video, photography, sculpture and installation with the aid of light, sound and the use of materials, each with its own connotation of cultural heritage.

'To Breathe: Mandala' (2010) is an installation that is represented by a ready-made American jukebox speaker which has the structure of a Mandala. The speaker has an array of vivid colors with a rotating central section covered in mirrors. Playing on the speaker is a breathing sound performance of the artist’s amplified inhaling, exhaling and humming (The Weaving Factory, 2004). Enveloped within a rectangular space with curved edges and painted entirely in yellow, the spinning central mirror of the jukebox reflects light throughout the 13th century chapel in which it is installed. In Obangsaek—the Korean color field that represents the nature of the universe—yellow is situated at the center of the four cardinal points and signifies ‘universe’, ‘earth’, ‘power’ and ‘dignity’. Together with the artist’s breathing sounds which recall both the individual and universal body, the speaker becomes a unifying axis, a mandala. Kimsooja leads us to a hypnotic and meditative outer space of timelessness, enhancing the sense of belonging to a universal, spiritual world, which inspires us to look within and reflect on our being in the world.

The bottari, a recurring sculpture, ready used object and concept, symbolic for the departure from a place and the migratory journey is a bundle of a persons belongings such as bed sheets and clothes wrapped in a bundle of cloth. A piece of past realities and present aspirations. Originally to explore 'pigment' and the aesthetic of colour Kimsooja discovered the Bottari during a residency at MOMA PS1 in New York 1992. Enhancing the idea of interwoven cultures Kimsooja has prepared the bottari's in the exhibiton with local mallorcin materials.

The bottaris are accompanied by photographs of prior installations of bottaris that are mounted in light boxes as to enhance the glow of their strong colour.

Also the work 'Encounter Piece - Looking into sewing' from 2011 shows colourful korean bedcloth draped over an apparently faceless figure. Its privacy, intimacy, sex and dreams admonished and a mirror of ones self, unique and treasured under numerous layers of social conventions.