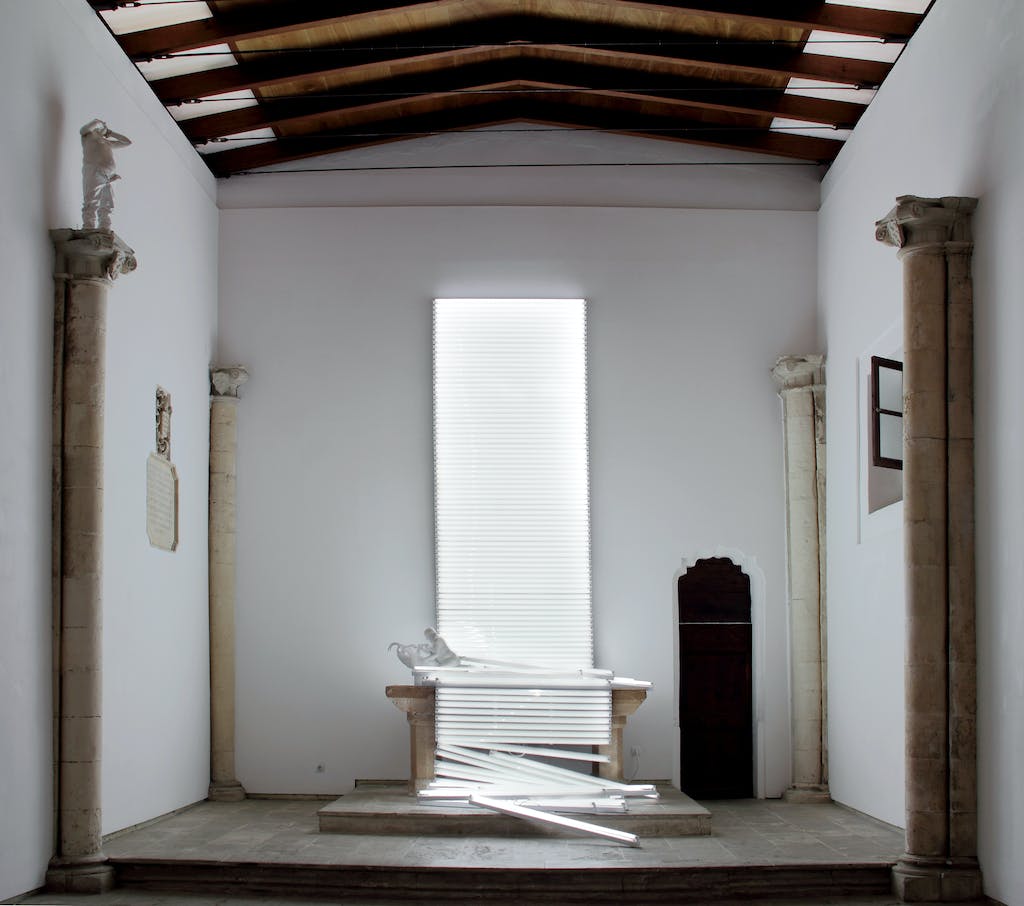 “Vox clamantis in deserto” is Bernardí Roig’s first exhibition at Kewenig. Conceived by the artist specifically for the occasion, the project appropriates and redefines the Oratori, a thirteenth-century chapel which is the gallery’s site in Palma. A group of new works—sculptures, videos, drawings and photos—made over the last year dialogue with the place and with its memory, setting up a critical confrontation with the space’s architectural and semantic foundations.

The narrative starting point from which the exhibition’s iconographic repertoire unfolds is Simon of the Desert, Buñuel’s short film from 1965. In it, Buñuel created a personal vision of Simeon Stylites, the fifth-century Christian monk who spent thirty-seven years on top of a twenty metre tall pillar in the desert in Syria driving away demons. For this exhibition Bernardí Roig worked with images culled from Buñuel’s film in a kind of obsessive and fragmented visual collage, cut through with a fixed idea: the demolition of linear time.

The exhibition is conceived as a form of usurping a space pre-existing the work, fully aware that when this space is not a white cube, it is necessarily infected by memory. And the Oratori is precisely that kind of space. As the name suggests, it was once an oratory, a place of prayer or, in other words, a place of the word, in much the same way as the pillar of the Stylite is the place of the always silent voice that mediates between man and the unknown. In truth, the power of this voice resides in the fact that nobody listens to it, just as nobody listens to the voice of the poet in a world taken over by the infernal noise of amnesia. The idea behind the exhibition is to insert the silenced voice of the Stylite into the Oratori, a place of prayer and of the word turned inwards.

From the front wall, a torrent of light pours over a stage setting of crossed gazes, replacing the open sore and crushing the altar of consecration until transforming it into a stone for pagan sacrifice, a place for copulation and metamorphosis. This whole theatrical layout is intensified with the phantasmatic presence of a figure escaping the boundaries of the image, whose expansion is enabled by the excess of light. The film POET is screened for the very first time in the choir, the place of multiple voices. Filmed this year in Senegal, in an endless suffocating loop, it scans the crest of the desert dunes, there where nothing settles on its surface of ashes, scourged by the wind that batters what remains of the landscape.

Over the last few years, Bernardí Roig’s practice has engaged with writers and other artists, working within a dialectic strategy with inherited images; images taken from a re-appropriation of other texts or figures as well as from a rereading of the traces and the destinies inscribed in them.

One could well claim that his work is caught between the blind gaze and silent language. It is underwritten by a clear-cut drive towards a rupture between word and image, by the continuing presence of the obscene and by a representation of man in twilight; in short, when gestures turn to grimaces and the gaze becomes incendiary.

St Augustine told us that John the Baptist was born of a sterile old woman and that his incredulous father was immediately struck mute. Years later, in the desert, when the crowd asked him "and who are you?" John answered: "The voice that cries out in the desert, who brings the Word".