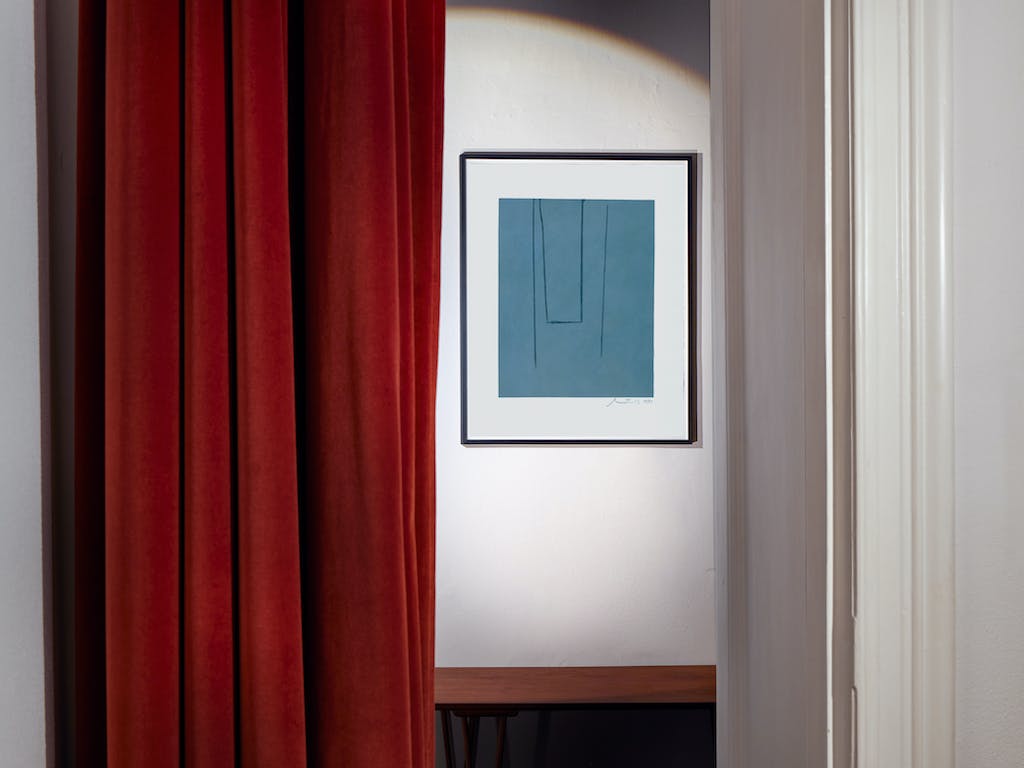 As one of the most influential representatives of the ‘New York School’, Robert Motherwell (1915-1991) played a leading role in the emergence and development of Abstract Expressionism. He created numerous iconic works of American painting and left behind an extensive graphic oeuvre. The second exhibition at Pied-à-terre focuses on this innovative and creative facet of his art.

The show is presenting several prints from the Africa Suite series from 1970. In each of the compositions a black, amorphous form stands out against a light-coloured background. These expressive images have a calligraphic character; they remain enigmatic, however, especially in their apparent dynamism. Here we can trace how Motherwell took up the automatism of the Surrealists, but now its goal was to generate an artist’s signature that was abstract and open to interpretation.

Motherwell very early developed a special passion for collage, devoting himself to this technique while he also worked on his large paintings. He developed forms of representation out of collage with the support of various printing techniques, such as aquatint or screen-printing. For example, the cigarette packages that the artist initially included as a collage element, he then reproduced by printing techniques in the 1970s. In this way, Motherwell was able to produce variations in other tones in addition to the characteristic wine red of Roth-Händle cigarette packages.

Motherwell discontinued making prints of such everyday objects after 1980. The subjects of the Berggruen series are greatly reduced compared to the collage-like prints. A few strictly geometrically shaped fields of different colours as the background provide the contrasting counterpoint for individual formless elements in black. The latter are reminiscent of the motifs in the Africa Suite series, but seem isolated and, in the interaction with the fields of colour, to be independent pictorial planes.

In Automatism Elegy (1980) and Elegy Black Black (1983), Motherwell again takes up a motif that he varied repeatedly throughout his artistic career: stringing together geometric figures, black surfaces and ovals. Motherwell’s Elegies go back to a work from 1948 that reflected the grief over the victims of the Spanish Civil War.

Motherwell, a self-taught artist, has had a decisive influence on American art since the 1940s. His openness in terms of content and design in conveying ideas and emotions by means of gestural abstraction represents an outstanding artistic approach and is very vividly evident in the painterly quality of his prints.

Robert Motherwell has been exhibited worldwide and his works are in the collections of major art institutions, such as the Tate Gallery, London; the Peggy Guggenheim Collection, Venice; the Guggenheim Museum, the Metropolitan Museum of Art and the Museum of Modern Art, New York; the J. Paul Getty Museum, Los Angeles; and the Art Gallery of Ontario, Toronto.