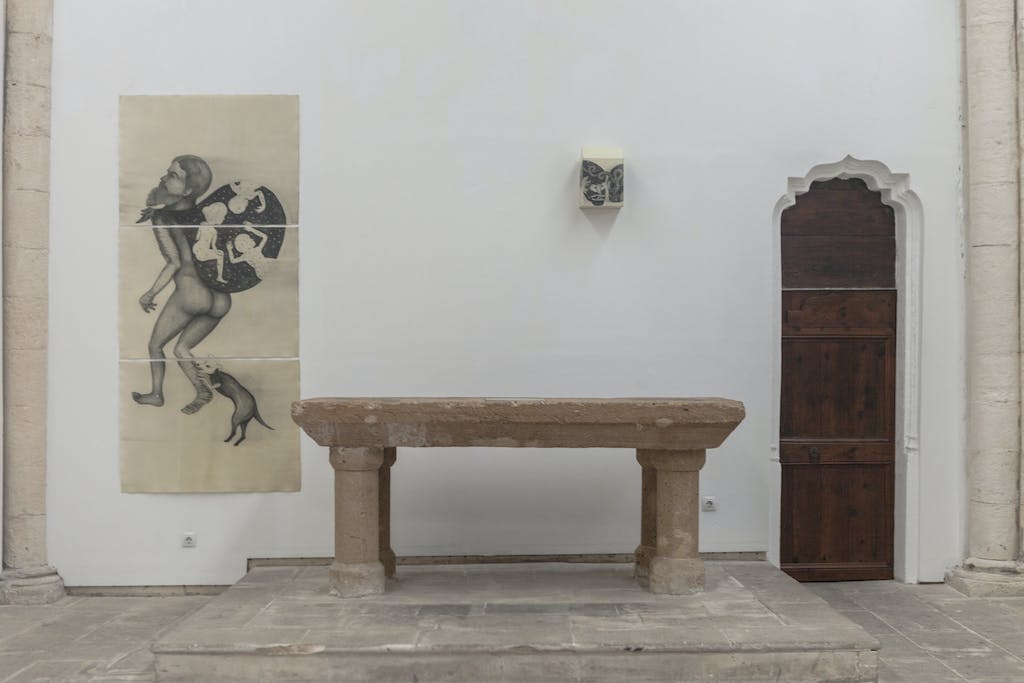 Sandra Vásquez de la Horra draws on paper with graphite and occasionally colored pencil, after which she dips the papers in liquid wax to seal them as fragile objects of the diaphanous physicality that has characterized her work since 1997. The exhibition, titled "Planetarium," combines new works in various formats, some of which have been created specifically for the exhibition. Collectively, they document a new high in her universal mythological imagery. Sensitized by her origins, the artist's figures recombine the elements of mythological worlds of various cultures in which, having been avidly interested since her youth, she encounters a profound knowledge of South American and European literature, philosophy and anthropology.

"Planetarium" therefore opens up an area of understanding that is a reference to Sandra Vásquez de la Horras' works as well as the declaration of a conceptual approach. Humankind, being inevitably finite, provides a sharp contrast to the universe that surrounds the world with planetary systems and constellations. Thus we have, since time immemorial, believed those systems and constellations to contain godly powers and have frequently illustrated what we imagine them to be. The near and the distant – the universal and the individual – are presented to the protagonist in the artist's drawings. They fluctuate between an abstraction of the imagined and a radical physical presence in this world. Grotesque figures from fairy tales and dreams are combined with a strange mysticism, which in turn feeds on the treasure trove of images in classic Greek mythology (Medusa, Hermes or Dionysus), on symbolism and surrealism, on the archetypes of various cultural circles (such as death, birth and time), on political actors and figures from popular culture (such as Pinocchio), on the five basic elements in nature, on bucolic figures (the spirit of flowers, the sleeping mountains of the Andes) and on Christian figurations. A special role is held by the myths and legends of the religion and cosmology of the Yoruba, whose overlaps with Christianity Sandra Vásquez de la Horra illustrates in hybrids of the two worlds. Suddenly, the absurd and the fantastical break from the connotations of modern reality.

Thus, for example, in the large triptych "El Portador de las Estrellas" (2015), a small dog jumps up at the leg of the naked, bearded walker, whose bundle of belongings reveals a galaxy with three floating figures. We discern, by his anatomy, that the "star carrier" is a human being, but he labors to contain the planetarium in his belongings and is therefore endowed with godly characteristics. According to the tale, he was sent to Heaven as a punishment because he was unable to retain the planetary constellations in his bundle.

In another triptych, the "Deidad Planetaria" (2015), the goddess of the planets, with a walking staff in hand, dances over a celestial body. Her Medusa head is wrapped in snakes to the point of blindness, her breast is adorned by a burning heart, and her pubic area is covered by a stag.  This latter attribute is seen in numerous godly representations of mythological and spiritual attitudes, and it's the bisexual representation of feminine fertility or masculine power.

Sandra Vásquez de la Horra, in these new works, increasingly overcomes the limited pictorial area of her paper formats by combining several to create large-scale triptychs. She breaks the flatness of the pictures out into the three-dimensional so as to create drawn sculptures as narrative units that appear like stage areas or showcases. The observer could nearly miss seeing that an indicated space or landscape only rarely leads to a depth of field presented in perspective. The plasticity of her drawings is often exclusively the result of the precise texture of the surface structures the artist hatches with a characteristic line, sometimes coarsely or sometimes more delicately. Her pictures materialize dreams and are aimed at the inexplicable, closing the door on a world of unholy symbols whose personifications can be at once ironic, unexpected, obscene and profound.