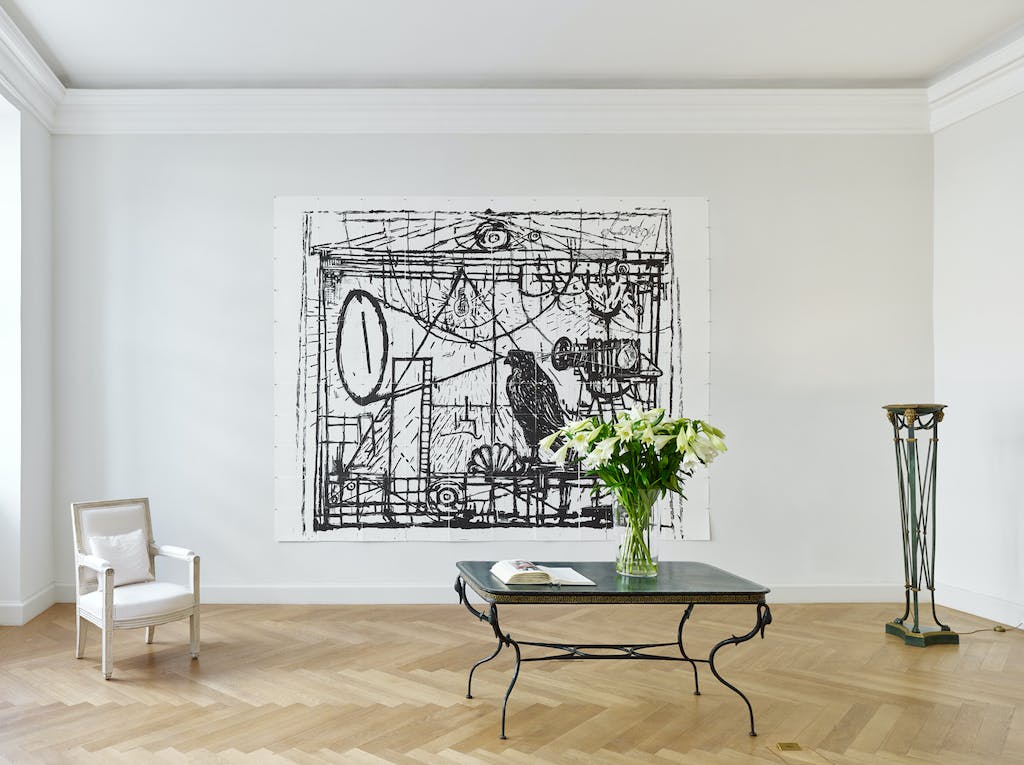 After his first show here, 'Tapestries' (2015), Kewenig is very pleased to present William Kentridge’s second exhibition at the gallery in Berlin. 'ENTIRELY NOT SO' concentrates on Kentridge’s prints from the years 2003 to 2016. His mastery of this medium has already been seen in the show 'Double Vision' at the Kupferstichkabinett in Berlin, which positioned his work in a dialogue with prints by Albrecht Dürer. The current exhibition at Kewenig will open at nearly the same time as 'NO IT IS!', Kentridge’s show at the Martin Gropius Bau and an eponymous program of performances, theater, and lectures at the house of the Berliner Festspiele.

In 'ENTIRELY NOT SO' Kewenig will present large lithographs, etchings, linocuts, and serigraphs featuring major motifs from Kentridge’s oeuvre of the last fourteen years. The exhibition pays tribute to the medium of paper as it is used in Kentridge’s work, since the artist’s images begin with pencil, brush, or chalk on white or pre-printed paper. Kentridge’s approach to all of his materials is open to randomness. For instance, he’ll occasionally realize his designs on paper for woodcuts or etchings in other materials, returning to the original medium at the end via the process of printing on paper.

The show’s oldest piece, Learning to 'Play the Flute' (2003), was made while Kentridge was working on a set design for Mozart’s 'Magic Flute', which was ultimately mounted at the Théatre Royal de la Monnaie in Brussels in 2005. The installation, which fills the wall, comprises 110 individual lithographs. Opposite them, collaged lithographs from 2012 feature the typewriter as a motif—an object that began appearing in Kentridge’s works in 1989 and has become increasingly more amorphous over time. The etchings 'Suite of 30 Nose (1-30) Prints' (2009) stem from Kentridge’s three-year-long period of preparations for his staging of Dmitri Shostakovich’s opera 'The Nose', which is based on Nicolai Gogol’s 1836 short story; Kentridge’s production was commissioned by New York’s Metropolitan Opera in 2006. Before it was performed in 2009, Kentridge created many works in various genres, all of which are exemplary of Kentridge’s various experimental phases in different media. In cooperation with Jillian Ross at the David Krut Print Workshop in Johannesburg, the artist produced the etchings with a special mixture of sugar, condensed milk, and ink. In Kentridge’s 'Suite of 30 Nose (1-30) Prints' the viewer can accompany the nose on its journey through Gogol’s absurd tale, as it detaches itself one night from the face of Kovalyov, a collegiate assessor, and takes on a life of its own as a government advisor. For example, the nose encounters Vladimir Tatlin’s 'Monument to the Third Internationale', asserts on horseback its political position as a government advisor, or is paired with historical works, such as Manet’s 'Olympia' or 'La Prune'.

In Kentridge’s oeuvre there is considerable focus on reappraising socio-political events in his homeland of South Africa. In this show, it can be seen again in the works 'Hope in the Green Leaves' and 'Lekkerbreek' (both 2013). Like the large lithograph 'Remembering the Treason Trial' (2013), recently seen in the 'Double Vision' show at the Berlin Kupferstichkabinett, these two large works of art were created in the wake of his study of the treason trial held between 1956 and 1961 in Johannesburg and Pretoria, which aimed to defeat the Congress Alliance’s Freedom Charter. Trees and landscapes with strong features are drawn in Chinese ink-and-brush technique, then photomechanically transferred to lithography plates, and finally printed on pages from the Britannica World Language Dictionary. William Kentridge describes his process: 'For that last year I have been drawing trees. … I had Chinese brushes, which hold their point for a while and then change, and the point splays out and makes a group of imprecise marks, rather than the clear calligraphic mark of the good brush. The bad brush suggests the plethora and the ordered randomness of leaves, or the feathery twigs at the end of a branch.'