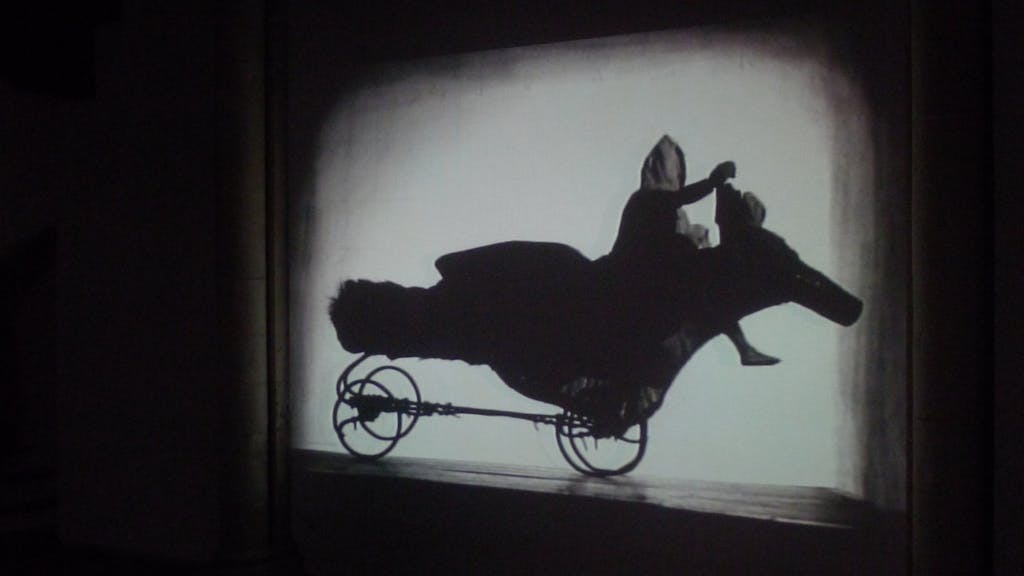 Kewenig is pleased to show William Kentridge's (*1955, Johannesburg) early video-graphic work Shadow Procession (1999) in Palma de Mallorca. Shadow Procession, an animated 35mm film, transferred to black-and-white video with sound (7 min.), represents William Kentridge’s early experimentation with stop-motion animation. Alongside his theatre productions Kentridge is internationally celebrated for his animated drawings and films exploring time, the history of colonialism and the aspirations and failures of revolutionary politics. For the first time in Shadow Procession, Kentridge bases a film not on drawings but on cut-outs and silhouettes of torn black paper. In the exhibition at Kewenig, a selection of William Kentridge’s prints from the years 2010-2016 will additionally be on display at the gallery’s office.

Shadow Procession is segmented into three acts, where in the first the spectator witnesses a procession of burdened figures slowly moving across the stage from left to right. The crowd of figures, including mythical creatures, injured „peg legs“, workers bearing possessions on their backs, dragons and dancing ladies appear as anonymous shadows taking part in a united migration. The movement of the march is complemented by and choreographed to singing by Alfred Makgalemele, a local South African street musician. In the second segment a colossal Ubu figure with enormous hands in gloves and a large swollen belly wildly cracks his whip and dances with arms raised. His grotesque performance responds to the clamour of army commands and gunfire heard in the background. Kentridge’s Ubu – who appears frequently in his work – serves as a representation of the South African “Truth Commission”, which publicly and juridical dealt with apartheid issues after 1994. In the final segment, a cat staggers across the stage moving in time to the music, followed by a giant eye rolling from left to right and functioning as a symbol for the need to remember the context of the eventful South African history.

The technique of working with jointed figures of torn black paper derives from William Kentridge’s background of theatre work with the Handspring Puppet Company. Whereas in his theatre pieces these shadow figures serve at the margins between the scenes, they then become self-sufficient characters in the film Shadow Procession. Henceforth the procession stays a recurring motif in Kentridge's multi media work, appearing in animated films, drawings, collages, theatre productions, prints and installations – such as his permanent large scale staircase work at MoMA PS1, New York (2000) or the 2016 inaugurated Triumphs and Laments, a 500 meter-long frieze, erased from the biological patina on the travertine embankment walls alongside the Tiber River in Rome. Shadow Procession accordingly holds a unique position within the evolution of the artistic vocabulary Kentridge nowadays is internationally recognised for, heralding one of the artist’s primary contents: The many states of migration and displacement during the apartheid-era in South Africa and more generally around the increasingly globalising world.

Kentridge explains that the images and protagonists of Shadow Procession move out the studio into a „raucous public space“ where they succeed in finding their own language as a cinematic artwork with an exuberant atmosphere of carnival. Listing a remarkable exhibition history, the film’s emblematic protagonists came across many prominent sites during their continuous march. They started at the Istanbul Biennial in 1999, where the work was to be shown in the Yerebatan Sarnıcı, a sixth-century underground water cistern. A projection of Shadow Procession on Times Square, New York, in 2001 exposed the theme to a public environment in the United States. The work was furthermore included in William Kentridge’s major touring retrospective „K5 – William Kentridge Five Themes“ (2009), amongst others at San Francisco Museum of Modern Art; MoMA, New York; Albertina Museum, Vienna; Stedelijk Museum, Amsterdam and Israel Museum, Jerusalem.