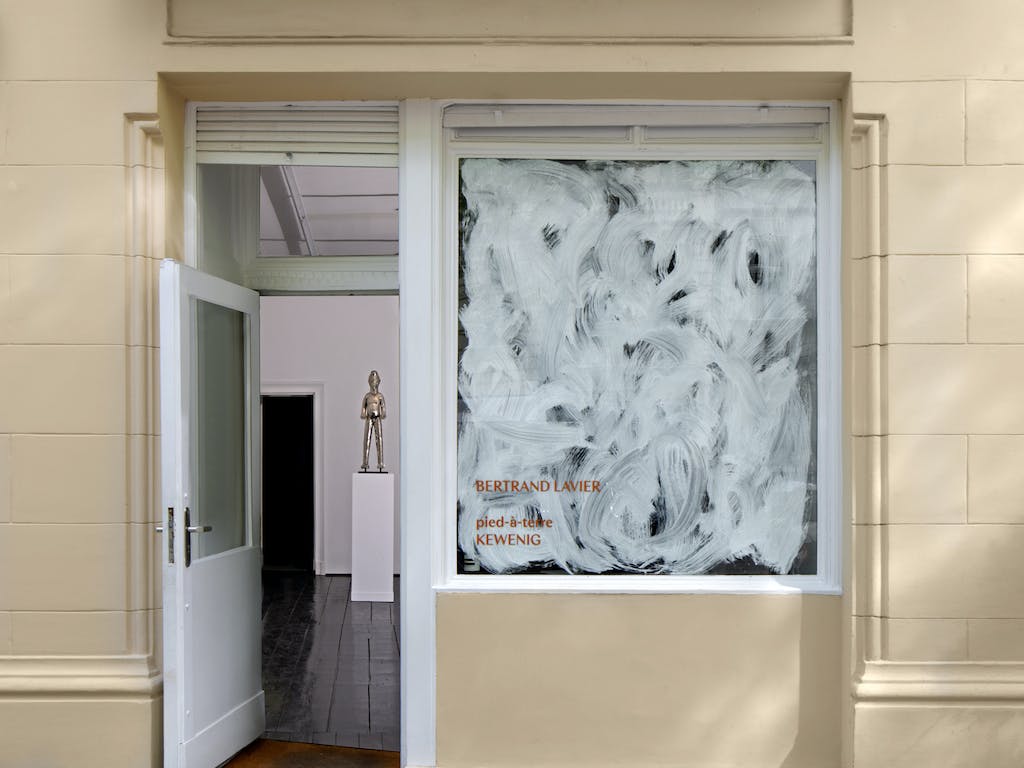 The first exhibition at our Pied-à-terre art space has the title Ouverture and is dedicated to the French artist Bertrand Lavier (b. 1949). His work is between painting and sculpture, challenging traditional notions of art and habits of perception. This show provides us with a fitting opportunity to open Pied-à-terre in the heart of Berlin-Charlottenburg, an inspiring venue with a dynamic programme that promises a diversified contribution to art presentation and outreach.

Within the framework of Lavier’s conceptual studies, which he has been pursuing since the late 1960s, the artist resorts to carefully selecting elements from banal everyday life, pop culture or art history. These he covers with paint, places on pedestals or combines together, isolating familiar objects from their usual context, stripping them of their function and translating them into works of art. He calls his different thematic fields ‘construction sites’ (chantiers), working on them in parallel, continuously developing them. They all share his ironic approach, the undermining of traditional categories of art-historical classification and playful shifts therein.

The motifs that the artist uses in his body of works entitled Rues were made without any artistic or aesthetic pretensions at all: Lavier took photographs of shop windows in the streets of Paris that were, as is customary there, temporarily painted over with whiting by craftsmen owing to renovations. From the street you can only see the rough, carelessly applied brushstrokes, which Lavier (with an eye to Roy Lichtenstein’s subject) recognised and seized on as a cliché of modern painting. Avenue de Ségur(2010) is an inkjet print of such a photograph on canvas, which in turn, like a painting, is stretched on a frame. Consequently, Lavier has in this case traced a network of relationships, which began with the work of craftsmen on building sites. This the artist has processed with the media of photography, printing and painting until it finally has become a unique piece of an exhibition. Lavier transformed something into the almost elegant aesthetic of a supposedly abstract painting, something that originally was intended to function as a kind of curtain.

Elegance also characterises the body of works entitled Miroirs (mirrors), as here in the work Fonter (2018). Bertrand Lavier has painted over the actual reflective surface that is generally applied to a pane of glass. However, he uses transparent acrylic paint and, with this medium, directly references the visual appearance of the glass. The almost gestural brushwork is reminiscent of that found in Avenue de Ségur. The refraction of light in the streaks of acrylic paint makes it impossible to see a clear mirror image of oneself. At the same time, the work acquires a vibrant sheen that the mirror was unable to produce. Here, too, the original function is now defunct, being literally covered by a film. The mirror, as an object, has materialised anew and, in the context of unveiling it as a piece of art, unfolds a new aesthetic experience.

With Atomium, détail no. 14 (2007), Lavier brings his concept of material appropriation into play on the basis of an extraordinary object: a component from a landmark of Brussels that goes back to the 1958 World’s Fair. The segment was discarded during restoration work some 15 years ago. We can no longer recognise the metal object as part of the Atomium; there is no indication as to its original functional and visual context. Additionally, Lavier has also painted over it – in the same hue. However, as he sees it, he has not painted over this segment but instead repainted it, with the pictorial subject as a support. The use of impasto brushwork applied in a staccato manner, the ‘touche van Gogh’, makes Lavier’s intervention visible and henceforth defines the surface by alluding to the Dutch master. But Lavier does not imitate the earlier brushwork and, instead, adapts its textured, sculptural qualities. The origin of this brushwork is artistic, in contrast to that in Rues. What has taken place here is that the traditional divide between painting and sculpture has been redefined by hybridisation, by means of ironically ‘elevating’ a previously unremarkable object.

The similarity in meaning to the concept of the ready-mades is obvious. Bertrand Lavier, however, adds further elements that underscore the innovative character of his works. In a conversation with the artist, the French art critic Catherine Millet put it in the following words: ‘The most Duchampian aspect of your work is […] to be sought […] rather in the pursuit of a reflection on the point of view, on the distance that one places between self and things, on the effects of perspective, on the transformations of the object, in accordance with the point of view that one adopts for considering it.’*

This is Bertrand Lavier’s fourth exhibition at KEWENIG, after solo presentations at KEWENIG in Cologne (2005 and 2009) and another in Berlin (2014) and, together with Christian Boltanski and Angelika Markul, at KEWENIG Palma (2018). Bertrand Lavier lives and works in Paris and Aignay-le-Duc, France.