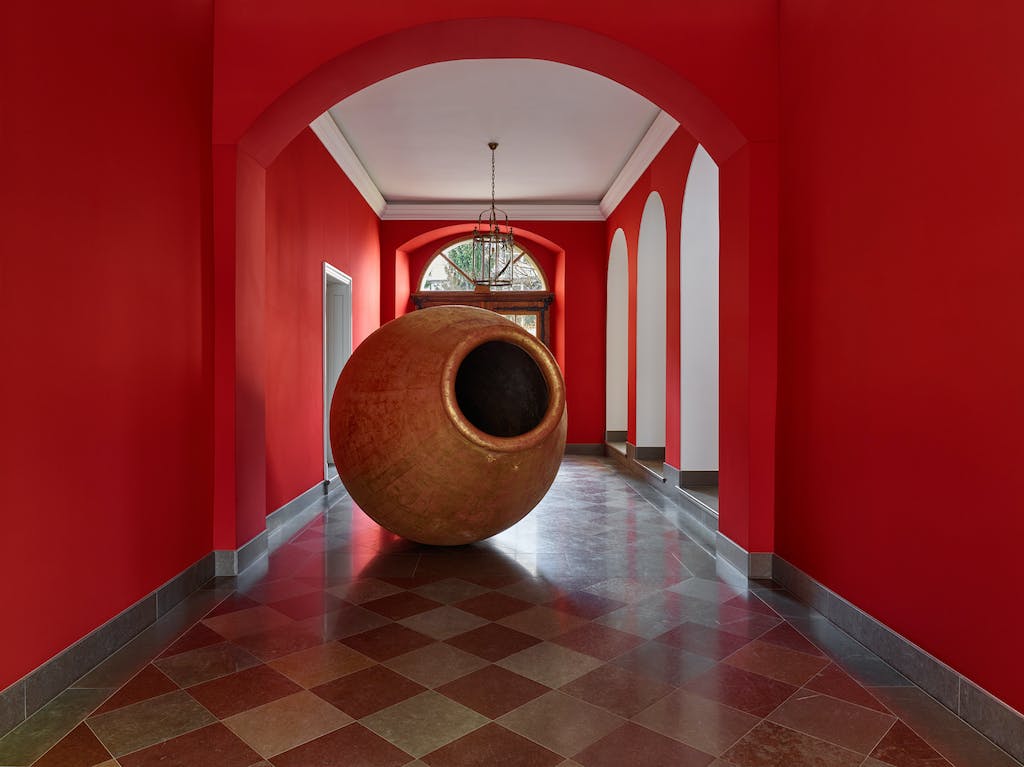 Kewenig is pleased to present the exhibition “The Palace of Perfect” with works by James Lee Byars (1932 – 1997). James Lee Byars is considered one of the most distinguished personalities of 20th century art. In particular with his performances, he opened up new terrain for his time and ahead of present-day contemporary art, crossing artistic boundaries that had thitherto prevailed.

Comparable only to Andy Warhol or Joseph Beuys, his work was inextricably linked to the appearance of his person. Byars, the man in the gold suit, with black gloves and a black top hat, his eyes - sometimes his whole face - cloaked behind the veil of a black silk scarf; the artist as a magician, as a magician of things in a world of everyday life, a strange solitaire who, in the dazzling exposition of himself, not only attracted attention but at the same time was able to ignite the attention for the present moment in others, creating presence and presence of mind. James Lee Byars stands in the mask of his artistic concealment anonymized as a human being in the center of his work, as a seeker of meaning in a world full of questions.

Born in Detroit in 1932, Byars studied art, psychology and philosophy at Wayne State University in his hometown. Following an early inclination toward Japanese culture, Byars first traveled to Japan in 1958 by ship. In the following decade he would commute between Japan and the US and spend most of his time in Kyoto. In Japan, Byars immersed himself deeply in the country's unfamiliar culture and philosophy, exploring calligraphy, the tea ceremony, Nō theater, Zen Buddhism. The respectful and ceremonial handling of materials, hand-made papers, fabrics and precious stones exerted a special charm on him. And it is not by chance that he later answered the question of who influenced him the most, with the names "Einstein, Wittgenstein and Gertrude Stein". The deliberate, focused activeness toward perfection, which Byars encountered in Japan, became the central foundation of his artistic language. And the decision, in the time of ‘arte povera’, to make his works out of precious materials, from the highest quality paper, the almost perfect white marble from Thassos, from silk, velvet, diamonds and gold, has its roots here.

In his performances, drawings, letters and sculptures Byars embodies the dream of perfection in an imperfect world. Titles such as "The Perfect Smile", "The Perfect Tear", "The Perfect Thought", "The Perfect Book" or "The Book of 100 Perfects" mark this artistic concept, likewise by the title of this exhibition. This romantic dream of utopia of another world becomes alive in the presence of Byars' work for a moment, becomes the here and now in the light of the beauty of his objects. What is striking is that traditional elements such as the rite, the ceremony, the baroque ornament and the like become vehicles and transmission belts of an absolutely contemporary, conceptual art practice, and in these contexts, space is given to more frowned upon phenomenon, such as beauty or mystery.

The exhibition "The Palace of Perfect" mainly shows works from the 1980s. Many of these works are books, that is, they are books in the sense of James Lee Byars. For him, a book could consist of one page or even hundreds of pages. It could contain writing or not. James Lee Byars' books can however also be made of stone or marble and closed like a sealed secret. In Byars' universe, books are a synonym for the search for meaning, objects to which questioning knowledge is bound, or, as Mallarmé put it: "Everything in the world exists to flow into a book". So, "The Moon Books", 1989, are cut marble books, shaped according to the different phases of the moon, in which the central questions of the universe slumber, which Byars brings to a golden table. An enigmatic ensemble like the stone formations of Stonehenge.

"The Spinning Oracle of Delfi", 1986, a large-scale amphora whose surface shimmers in the eternal brilliance of gold, seems to be guarding the questions of the millennia in the black darkness of its interior and willing to accept our questions of today. In another room, a pointed question in the form of an antique dagger, "The Dagger", 1989, pierces the golden surface of the room, in which it is housed - perhaps with the aim of bursting the threshold of the interior at its sore spot? And, as in a Wunderkammer, in another room "The Unicorn Horn in the white circle" 1984, the tusk of a Narwhal, a rarity from the under-world of the sea-dwellers, is laid to rest on a long silk cloth, whose folds appear like a sea of white feathers.

James Lee Byars is no longer living among us. But even in his lifetime, chairs from past centuries in his exhibitions were a sign of the presence of the absent author. "The Chair of Transformation", 1989, is one such 17th-century chair, which, wrapped in a red silk tent, describes the fleeting home of the world's nomadic artist. In the imagination of the beholder, this chair marks the space of questions to our own existence, in which the dream remains to inquire into the complexity of one's own subjectivity and, according to Rimbaud's great motto: "I is another", to bring it to life.

It is not the first time that the art of James Lee Byars has made its appearance in a baroque setting. And so, his works of lucid beauty and noble materiality find an adequate domicile, a ‘genius loci’, in our rooms in Berlin for the fleetingness of an exhibition. "The Palace of Perfect" formulates an avenue of question marks. And given the beauty of these questions, the uncertainty in the face of a world full of questions may give way to a desire to ask questions. For if the question is already shown in such perfection, how may it be ordered to the answers, in whose buds the beauty of renewed questions already germinate.