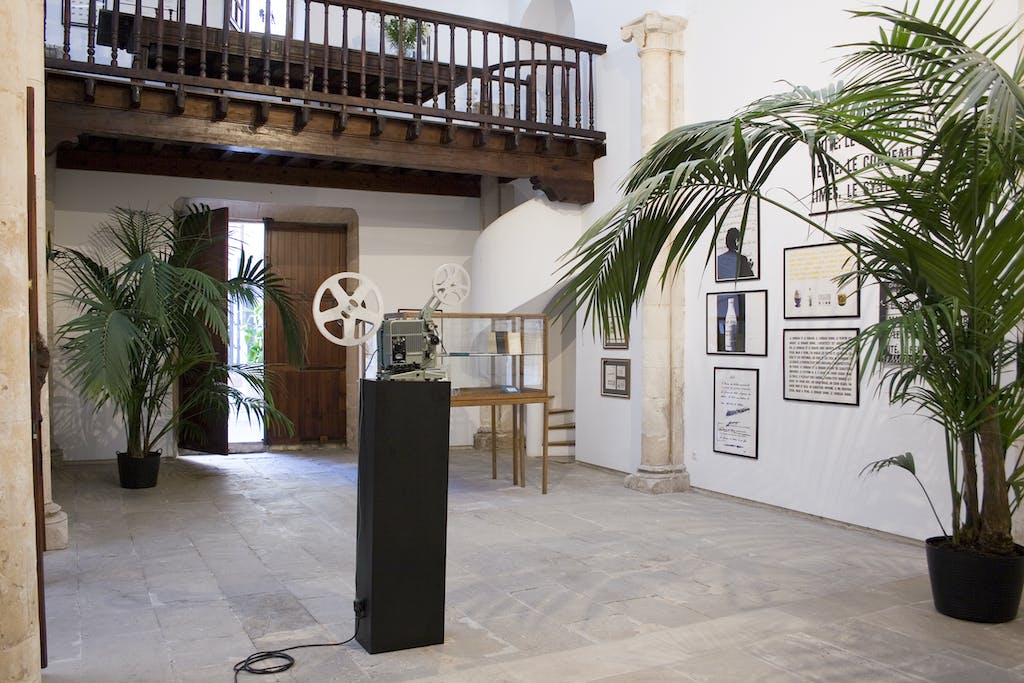 The dice fell already in 1945 when the Belgian surrealist, Réné Magritte, gave the young Marcel Broodthaers (1924 in Saint-Gilles, Belgium - 1976 in Cologne) a poem by the first avant-garde poet, Stéphane Mallarmé, the Coup de Dés (Throw of the Dice, 1897). In this encounter there is much of that which permeates the later part of Broodthaers’ work, particularly his entire graphic oeuvre that came about between 1964 and 1975. From his artistic model, Magritte, Broodthaers received with Mallarmé's work the imagery. From Magritte himself he adopted the visual poetry and took it further artistically. Broodthaers stands in time and style at the interface between classical modern art and contemporary art, and lays the foundation stones on which artists base themselves to the present day.

Whereas Mallarmé still used the pure text, but employed it typographically in such a way that it recalls the movement of a thrown dice, Broodthaers combines writing and image with a witty play on words, like Magritte before him, and thus underscores or contradicts the sense of the words. In 1969 he refers to Mallarmé’s poem, Un Coup de dés jamais n'abolira le hasard, in a book in which he strikes through the individual words of the historic model. In this way, Broodthaers emphasizes all the more the release of language from its meaning and underscores the artistic approach of the poetic avant-gardist. Broodthaers draws from further literary sources such as Jean de la Fontaine (Le Corbeau et le Renard, The Fable of the Fox and the Raven 1967 and Comment va la mémoire et La Fontaine? from 1973) Alexandre Dumas, Charles Baudelaire (Pauvre Belgique, 1974), and not least of all, the Catalan author, Joan Brossa i Cuervo, who wrote numerous neo-surrealist writings and, in the 1960s, experimented with visual poetry at the same time as did Broodthaers. As an artist who venerated also Marcel Duchamp and Kurt Schwitters, Broodthaers questions words and language and their usage. He plays with them in order to entice from them further possibilities of interpretation, association and, not least of all, wit than they surrender of themselves in everyday life. Broodthaers liberates language from the pure representation of meaning and elevates it as such to the status of thematic subject instead of using it merely as a means to an end.

As bearers of his graphic works, he is served by sheets of paper and also by envelopes, glass bottles, school exercise books, film canisters and bank-notes. The technique of printed graphics is a welcome aid for him to add another plane to the signifying planes of word, image and subjectile. Thus, in 1969, with La Signature, he leads his own signature and thus the proof of artistic originality ad absurdum by repeating it many times. He takes up current discussions and events in 1972 in The Law and artistically treats the beginning of debates over prohibitions of smoking in public. Around the eagle, a motif used many times in Broodthaers' entire oeuvre, and its symbolic, mythological, art-historical and heraldic meaning circle the Six lettres ouvertes Avis from 1972. With Broodthaers, much can only be understood on a second look. The breeds of cow displayed in an orderly manner in the bipartite work Les Animaux des la Ferme from 1974 are decorated with the names of car brands. Broodthaers loves to mislead viewers and demand that they look more closely in order to decipher the wit, specialness and ultimately the meaning of the graphic works.