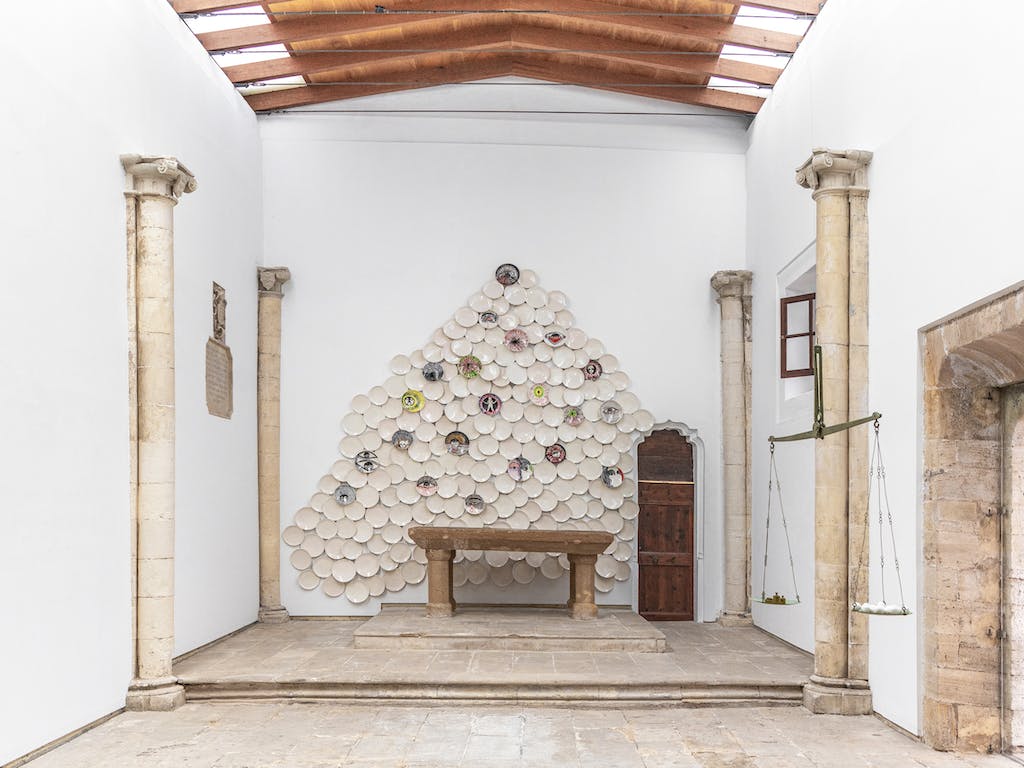 Sandra Vásquez de la Horra (b.1967, Viña del Mar, Chile) presents ‘El Ojo Interior’ (En. The Inner Eye) at Oratori de Sant Feliu, an installation that continues the three-dimensional and sculptural line which her work has acquired in recent years. For this exhibition, the Chilean artist has worked with ceramic, in collaboration with the Pere Coll studio in Pòrtol.

Titled 'El Manto de Obatalá’ the monumental ceramic installation covers the wall behind the altar of the Oratori from the 13th century. As a kind of great offering, or “ebbó”, according to the Yoruba tradition–this work consisting of 200 ceramic plates –some of them hand-painted by the artist– creates a new altar with the intention of invoking the Good. 'El Manto de Obatalá' represents a story about life and the expansion of the human condition. Vásquez de la Horra applies color to the ceramic plates in calm and thoughtful brushstrokes. With images referring to struggle and suffering, the artist erects a visual scene in which eyes with tears of blood, oppressed human figures, as well as skulls appear as a memento mori.

Vásquez de la Horra‘s narrative is based on the ‘Estallido Social’ that took place in her native Chile in 2019. Several people lost their lives and many others totally or partially their vision, due to the violent revolts between police and citizens in Santiago de Chile. As a tribute to these victims, 21 ceramic eyes are laying on a scale in symbolic representation of the weight of justice. References to the Yoruba religion and its Orishas have always played an important role in the artist's work. In this case, referring to Changó (orisha of justice) and Eleguá (the first of the warrior orishas, a messenger between deities and humans), numerology has a bearing on the twenty-one paths of destiny and gives this work a special correlation with the allegorical.

The way in which the artist treats the unknown as real and how she subjects certain ideas to metamorphosis in order to configure her work, makes the irruption of the implausible take shape in the mind of the spectator. She takes this metamorphosis to the most literal level when she finishes her graphite on paper works by waxing them, thus creating a patina that gives materiality and body to the piece. This technique is also applied in her leporellos, three-dimensional works in large format in which the graphite and sometimes watercolour and gouache are trapped and immobile under the waxing. The leporello ‚ ‘El Ojo Interior’ (The Inner Eye) directs our gaze, while at the same time resting in deep connection with its inner self. Her work often draws on literary, mythological and religious references as well as philosophy and psychology.

Making use of the fable as inspiration, and aiming at a certain autobiographical portrait, the artist tackles issues that deal with female sexuality, taboos and oppression, and preconceived beliefs that condition human freedom. Vásquez de la Horra builds from dreams and the subconscious, from memory and recollection to form the vast visual imaginary that constitutes her expressive language, with an intimately personal poetics.