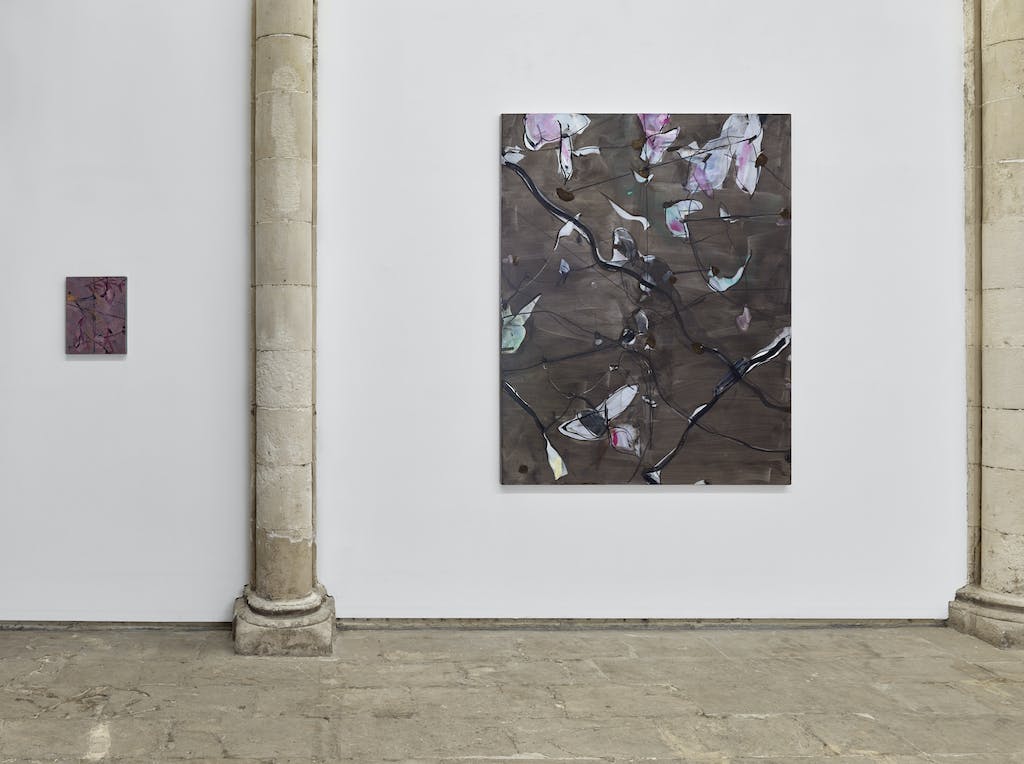 The painter Bernd Koberling, born in Berlin in 1938, lives in Berlin and Iceland. Since first visiting Iceland in 1977, he has been spending several months each year at his second place of residence in Lodmundarfjördur on Iceland's eastern coast. The landscape on the volcanic island situated on the edge of the northern polar circle is interspersed with rivers, lakes, waterfalls and glaciers. The great currents of these water masses distributed cyclically over the land of this Arctic island are the starting-point for Koberling’s new work cycle which he has created especially for the Great Current exhibition at the Gallería Kewenig in Palma.

The central motif of expressive views of Nordic nature in Koberling's oeuvre condenses in these new works around the theme of the movement of water, even up to the "fascination of perpetual movement" (Koberling). It is not difficult to sense the powerfully flowing water of Icelandic glacial rivers and the grey stony expanses of the river-beds in the grey tones of the paintings in the exhibition, Great Current. Intensified by variations of vivid pink and soft pink, proceeding from the Arctic willow-herb and its sometimes blanket growth over the courses of Icelandic rivers, in his own language of images, Bernd Koberling creates dynamic webs of oil paint on the canvas. With colour, form, surface and line as the elements of painting, he weaves the energy-rich tensions of the great water currents into paintings.

Each year in Iceland, sizeable cycles of water-colours on paper arise which the artist paints outdoors, spread out on the ground. Back in his Berlin studio, the water-colours serve him as a memory-prod for his painting, never as a model. Canvases grounded with several layers and smoothed are the subjectile on which lucid layers of colour consisting of oil paint thinned with turpentine overlap, break and combine in a free, but simultaneously precise play. Supplemented here and there in retrospect with a masterly handling of brush and paint, Koberling fathoms the potential of his material.

He never applies the oil paint (as previously, the acrylic paint) thickly. The transparency and lightness of the liquid paint is a characteristic of his material aesthetics and simultaneously the theme of the new work cycle. In it, Bernd Koberling no longer works merely with the liquid character of the working material, but above all on flowing itself, thus combining the content and method of his painting.

Koberling paints, seeks and changes; he applies layers of paint, supplements the traces with new lucid islands of colour, sets down lines without contouring, weaves in accentuated circles and dots, blotting out elements again that are covered up by the newly applied layers. His painting-process does not follow any chronology but results from the simultaneity of the gaze as a structure of diverse variations and intentional expression.

They are representations of nature without, however, being landscape painting. Rather, mediated by the painter's eye, mind and painting hand, nature is restructured on the canvas in its ongoing processual movement. It is not the painterly illustration of an idea of natural order that provides the form to Koberling's paintings, but painting with the painting itself. His non-representational painting — set into motion by a spontaneous drive, and captured consciously and reflectively in the next moment — can make the enthusiasm for the experience visible and feelable. The field of tension of a reality consisting not only of despair but also of happiness — such as that of a painting accomplished — comes about dialectically.

In conversation with Bernd Koberling, his words have such an astonishing intensity that they disclose, all of a sudden, the enthusiasm and seriousness with which he raises art to his life's substantial content. Starting in the 1950s, his work had its beginning at a time when the search for the New stood as paradigm on everyone's banner. Koberling decisively countered the attempt to escape the tradition with the slogan, "The New Needs Tradition". In proclaiming this, he consistently turned away from working with acrylic paint (flat paintings) in order to paint exclusively on canvas with the oil paint that was richer in tradition