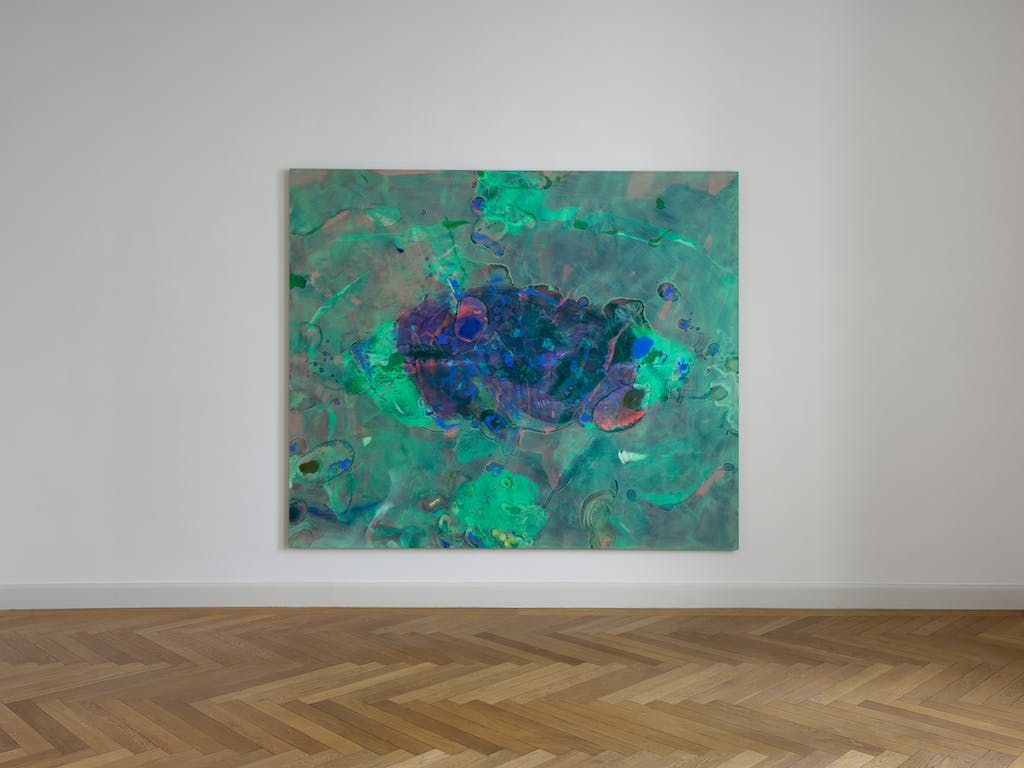 The new paintings by Bernd Koberling, neither figurative nor entirely abstract, are intense, unusually eventful works. It quickly becomes clear what they are about, and what is happening here: in the painting, with the painting, with one’s own eye and one’s own inner perception. This perceptual process is capable of guiding the viewer’s gaze through numerous lines, planes, heights and depths in order to discover what was previously invisible.

The 297 watercolours from which a selection is presented in this exhibition are all in a small format, which is also new for this artist. They were produced in Koberling’s Berlin studio from January 2021 to February 2022. The circumstances of the pandemic and his parallel project to produce several large paintings were the consequence and the motivation for concentrating on these small paintings, which he arranged in seven books.

If in the earlier watercolours the landscape can be defined as the immediate point of departure, that is because Koberling painted them in Iceland, en plein air, in the middle of the harsh landscape and its diverse vegetation. The sensitivity with which he not only perceives and records on paper the flowers, light and climate, which are charged with almost elemental significance, but also transfers them into his version of the world, because he has internalised them, enables him to react to what he had seen previously but now, separated from that place, feels. His paintings are therefore not pure depictions of the seen but always experiences and sensations with nature and through nature are also put to paper with a light stroke, as if the brush were tracking a scent in the flow of paint.

This results in islands of paint of glowing transparency and great depth, blurring with lines and other forms. They assert themselves as wilful formations, removed from their surroundings and embedded in powerful or pastel-like shades. That happens in Koberling’s watercolours as well as in his paintings. With the same intention of realising his visual ideas, the artist is constantly producing the unexpected on canvas as well.

His visual ideas feed on perceptions and sensations. They erupt as an impulse, as a reaction to the previous brushstroke, then open up as a new impulse that is immediately made available. When painting, Koberling repeatedly intervenes by removing, wiping, or rubbing away the paint already applied, usually in order to react to it again, applying new layers of paint and demanding reactions from it. These active, controlled processes, which constantly leave traces behind, represent the artist’s constant grappling with the canvas and with what the paint causes to happen on it.

Extremely thinned oil paint, when it collects in separate puddles and is exposed to the climate of the studio, provokes a sedimentation that makes it possible to perceive the drying process as if observing from a bird’s-eye view a body of water whose moving shore is leaving traces behind on the land. Not only in the knowledge of how Koberling works but also when viewing the paintings, there is a tangible sense of reading the traces that were left here, exposed, wiped away, excavated, piled up and reshaped.

Viewing the paintings means following these traces. Indeed, it seems as if one is being drawn into a genuine process of observing and perceiving. First, it is the eye, which wants to move, searching, through the many lines, planes and depths. Collecting such visual experiences in this powerful superimposition and imposition of layers of paint ultimately results in a tension of an inner perception that remains in continuous motion. Spaces and interstices open up and expand. The pictorial space is defined by a multilayer weave of richly contrasting exposed lines, which transition into semi-transparent streaks and planes, condensed into opaque islands in carefully concentrated positioning, not infrequently also as a pole of calm and agitator in the best sense.

Bernd Koberling’s large-format works in this exhibition are powerful paintings, lively but not restless, and this is not less true of his small watercolours. For all their formal differences, they can be treated as equals of the large paintings, since the situations under which they were produced are comparable, and they are very similar in terms of the artistic approach and intensity of depiction as well. In this way Koberling has succeeded in produce small watercolours with great effect, just as his large-format paintings preserve an astonishing intimacy for all their monumentality.

With his new works shown here, Koberling marks a notable zenith in his artistic career. Like other artists of his generation, Koberling had begun in the early 1960s to sound out the possibilities of painting. Compared to Georg Baselitz, K. H. Hödicke or Markus Lüpertz, however, he seemed to dedicate himself to figuration from a much greater distance, since he turned to nature and the landscape early on, though without tying himself to these subjects. Bernd Koberling’s painting, this exhibition shows, is intuitive, emotional painting. The experiences of what he has seen, experienced and felt are released by his painting; they open up from the paint and its application to paper or canvas, and they lead into a stream of perceptions that draws the viewers along with it and into the pictures.

A catalogue of 297 watercolours is being published by KEWENIG to accompany the exhibition, with a text by the art historian Kirsten Claudia Voigt (Bernd Koberling: Zweihundertsiebenundneunzig Aquarelle, German and English, 322 pages). The book is available at the gallery.

Bernd Koberling (b. 1938 in Berlin) taught painting from 1981 at the Hochschule für Bildende Künste in Hamburg and from 1988 to 2008 at the Hochschule der Künste in Berlin. As a central representative of Neoexpressionist trends in painting, Koberling’s works were already being shown in the early 1980s at such legendary exhibitions as A New Spirit in Painting and the Royal Academy in London (1981) and Zeitgeist at the Martin-Gropius-Bau (1982). In 2006 Bernd Koberling was awarded the Fred-Thieler-Preis for painting. Since 2012 he has been a member of the Akademie der Künste in Berlin. His work has been granted numerous solo exhibitions, most recently and extensively in 2017 at the Museum Küppersmühle, Duisburg. His works are represented in institutional collections worldwide, such as the ARoS Aarhus Kunstmuseum; the Hamburger Kunsthalle; Nasjonalmuseum, Oslo; the Reykjavík Art Museum and the Vancouver Art Gallery. Koberling works in Berlin and Iceland.