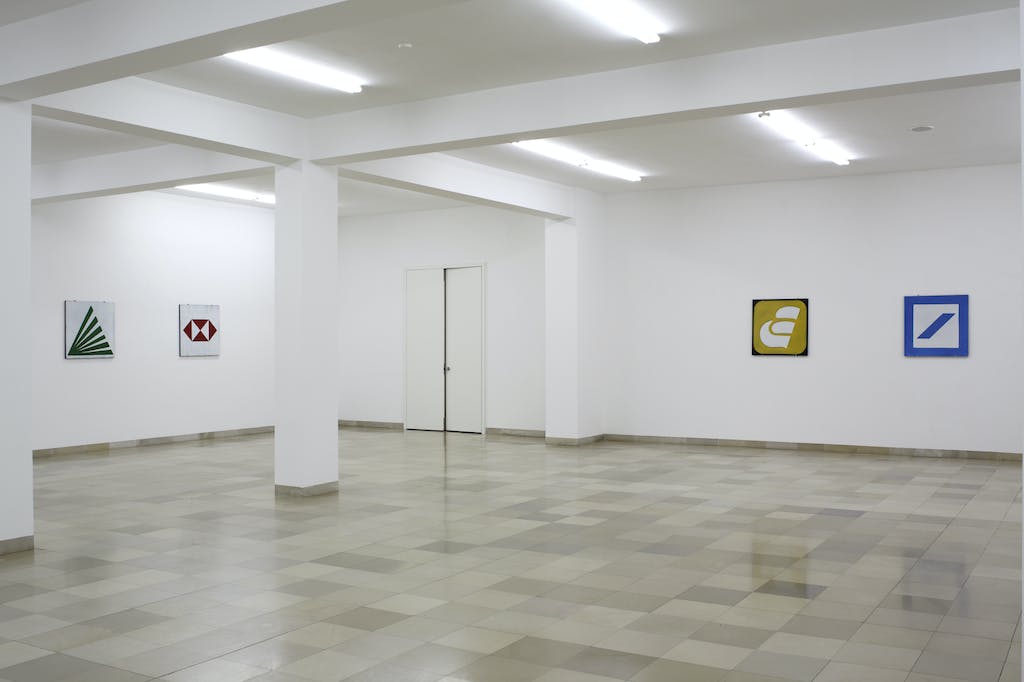 Bertrand Lavier's upcoming exhibition at the Kewenig Galerie in Cologne is titled "Sociétés Générales", the focus of which is a new installation with the same title consisting of eight large ceramic tableaux depicting the logos of globally active banks. The installation couldn't be timelier. "Billion Dollar Gamblers in Police Custody", "Speculation Scandal", "Fishy Credits" and, more recently, "Laggard Recovery" are just a few of the headlines one finds on the web upon "googling" the exhibition title. Most of these headlines, which accurately describe the current global financial situation, are directed, of course, at the French commercial bank Société Générale, whose logo is included in Lavier's installation, along with those of the Deutsche Bank, Bank of China, Banque Populaire, Postbank and HSBC.

Nevertheless, Bertrand Lavier (b. 1949 in Châtillon-sur-Seine) is less interested in depicting or making reference to particular financial institutions, but rather his selection of logos is based solely on formal criteria, such as the simplicity of geometric forms and clear, intensive colours. To underscore the formal nature of his approach to this series, he has grouped the eight panels into four sets of two panels each, as diptychs, whose colours and forms enter into an aesthetic dialogue with each other.

The installation was first shown earlier this year on the historic garden facade of the Villa Medici in Rome as part of a comprehensive exhibition of works by the artist from 28 January through 8 March. The facade was originally commissioned by Cardinal Ferdinand de Médici in 1576 as a kind of open-air museum with numerous sculptures, frescoes and decorative cornices. In the niches designed for the figurative sculptures, which, over the centuries, were transferred to Florence by the wealthy family of bankers, Lavier positioned his eight square ceramic plates with logos in luminous colours. Behind the rigid geometric corporate logos lies a hand-made support, which elevates them from universal symbols to individualized works of art. They works are not signed by the artist himself, but rather by the ceramic studio Ernan Albisola, which was commissioned with crafting them. In the context of the Villa Medici, the eight panels are reminiscent of the banners that can be found adorning almost every major art exhibition across the globe, which refer to and honour the generous patronage of numerous sponsors, in many cases financial institutions, such as the Deutsche Bank, who follow in the footsteps of the famous Medici banking family.

In the vaulted cellar space of the Kewenig Galerie, Betrand Lavier presents his film "Four Darks in Red" (2004), titled after the painting of the same name by Mark Rothko, underlayed with the sound of a film reel projector. By transforming the static image into a flickering film-loop, the artist plays with the seemingly mutually exclusive genres of video and painting and questions both forms of representation and the way in which each is perceived by the viewer. Accompanying the video projection is a multi-faceted documentary film on the artist by Heinz Peter Schwerfel, "Cinq Pieces Faciles" (1998).