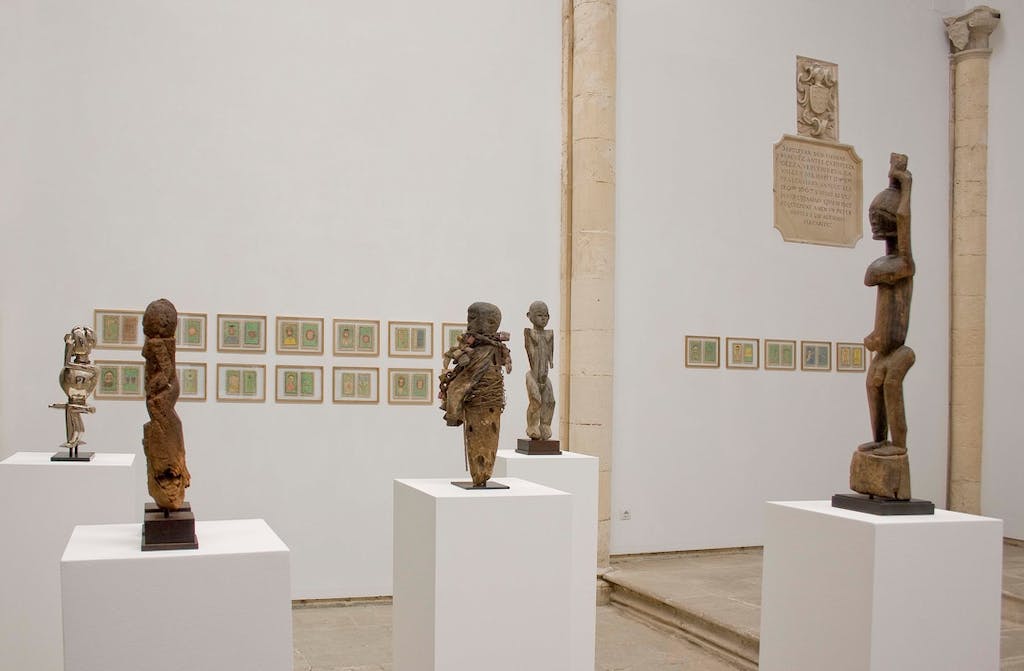 The current exhibition of the Galería Kewenig in Palma de Mallorca, "Magiciens de l'Afrique", shows a selection of richly diverse African art and, at the same time, its effects on contemporary art. It unites photographs by the Malian portrait artist, Seydou Keïta, and drawings by Frédéric Bruly Bouabré with archaic African sculptures, but also with a recent nickel-plated sculpture by the French artist Bertrand Lavier, thus paying tribute not least of all to a path-breaking exhibition that placed African art in the context of contemporary art for the first time in 1989. Like Keïta, Bouabré, too, gained access to the Western art world through this exhibition "Magiciens de la terre" in Centre Pompidou which was curated by Jean-Hubert Martin and André Magnin.

As an autodidact, Seydou Keïta transformed classical African studio photography into a unique photographic art. With sure-footed sensibility for those portrayed, his black-and-white photographs show a remarkable sense for detail, the gaze, the pose, the symmetrically arranged background and the carefully selected accessories. His precision and simultaneous discretion are, at the same time, historical evidence of the modern Malian middle class and its unique synthesis with Western consumer culture. The exhibition brings together thirteen of Keïta's photographs that came about between 1949 and 1959, part of his oeuvre that is represented internationally in both public and private collections.

By Frédéric Bruly Bouabré (born around 1923 on the Ivory Coast), the Galería Kewenig is showing a key work, "Le Musée du Visage Africain" (1995/96) from 78 colourfully painted sheets the size of postcards that were put on show already in 2002 at documenta XI. Since the 1940s, in his drawings and accompanying written passages, Bouabré has been casting a symbolic system of signs for divine creation. His work represents a synthesis of old traditions with modernity. From prehistoric African writings, modern advertising logos, emblems and symbols, he finds new formulae for a universal interpretation whose basis is always a firm belief in God.

Framed by Keïta's photographs and Bruly Bouabré's pictographic drawings, the exhibition is showing in the Oratorio de Sant Feliu wooden sculptures by ancient tribes from West Africa. Talismanic figures of the Dogon (Mali), androgynous sculptures in austere Cubist forms symbolize at the same time masculine strength and feminine fertility. The people of the Lobi (Burkina Faso) carved so-called Bateba figures with strict symmetry in their thoroughly formed bodies and expressive portrayal of their facial traits. They were understood as mediators between human beings and supernatural beings. The talismanic figures of the Fon (Benin) make a connection with the religion of voodoo. Their task consisted in attracting evil to themselves, thus deflecting it from people. One of the figures in the exhibition is wearing a coat made of iron padlocks. Each padlock symbolically stands for fathoming an accident or problem that has to be solved or 'opened'. Androgynous figures of the Ewe (Ghana, Togo and Benin) complete the exhibition. Among the many people of Africa, the birth of twins is regarded as a mystical event and as a sign of divine blessing. The death of a twin demanded the making of a twin figure. Honouring deceased twins in this way brought the reward of happiness and comfort.

The circle to contemporary art is completed by Bertrand Lavier (born 1949, now living in Burgundy and Paris), whose work will be shown in 2012 in a large retrospective by the Centre Pompidou. Lavier, whose art goes beyond the tradition of ready-mades, has been engaged since the 1970s with mechanisms for transforming everyday objects into art. At the Galería Kewenig he takes up African sculptural language in order to reinterpret it in his own reply, thus bringing it into present-day art via his characteristic style. Made and used in Africa as everyday objects, the sculptures first became works of art and commodities in the art trade within the context of the European world. By not carving his sculpture in a handicraft way, but casting it in bronze and having it nickel-plated, Lavier demonstrates how an individual art object becomes artistic commodity.