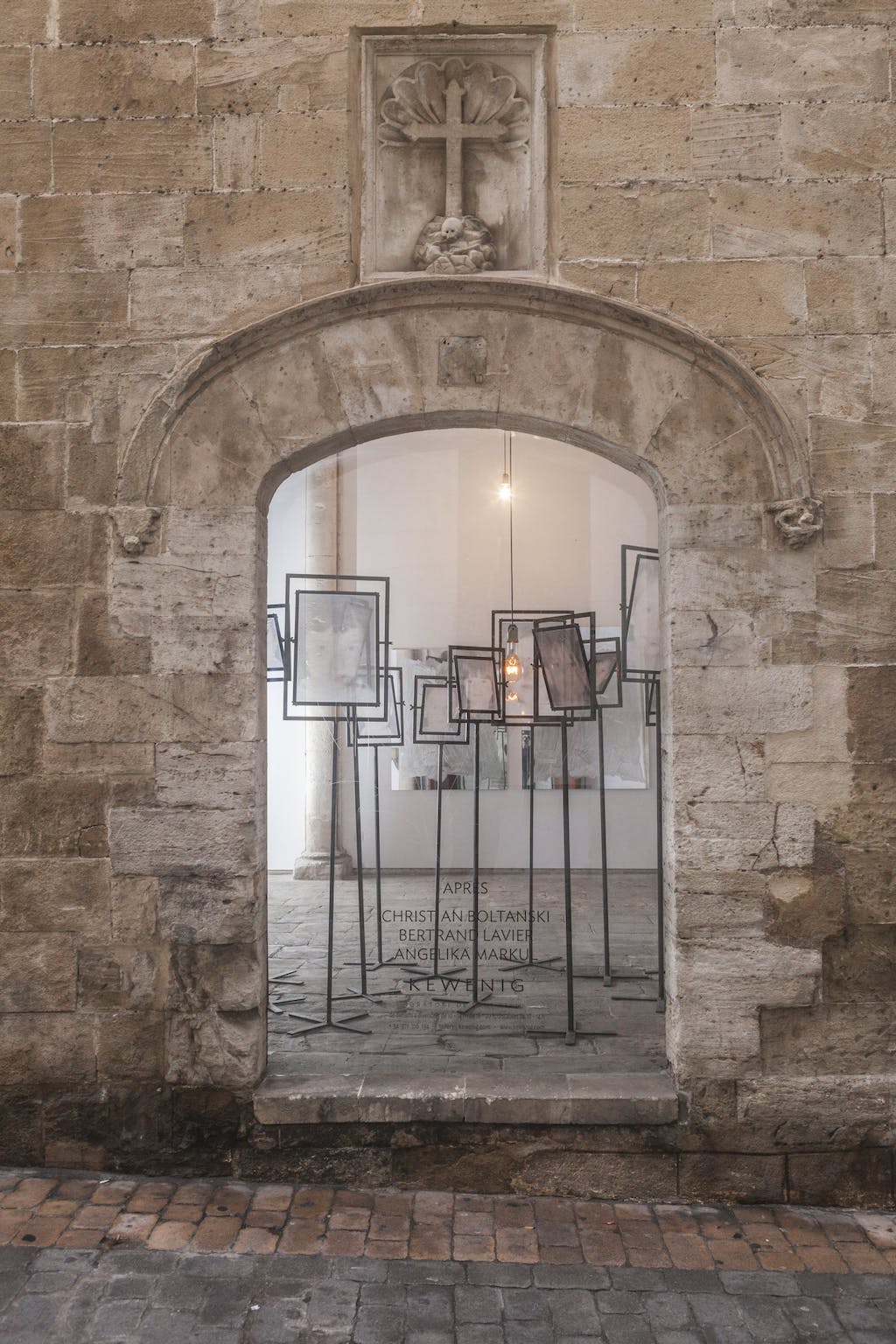 KEWENIG is pleased to present "Après", bringing together the artists Christian Boltanski, Bertrand Lavier and Angelika Markul in the Sant Feliu Oratory.

In this exhibition time and memory are questioned as a form of survival, challenged by the awakening of memory and the struggle against time. Marcel Proust, in In Search of Lost Time, contemplates deeply oblivion and the alteration of the notion of time. Hence the idea that the state of things does not only belong to the present. These three artists, Boltanski, Lavier and Markul based in Paris, somehow reclaim this rumination in Après. They play with the notion of time, transplanting the past into the present, moving between the line of reality and the artistic, courting with the idea of death to give life.

Après (2000) is the title of the work presented by Christian Boltanski, and gives the exhibition its name. The work immerses itself in an analysis of existence, its inevitable end and subsequent search. The artist started this journey by means of twelve photographs printed on linen, based on his work Les Ecoliers d'Oiron (1993), framed in metal poles and bases of the same material. At the moment in which the camera shot to portray the children, this reality became unalterable, the past will always be present. Thus, this means of expression represents the support through which to see, remember and preserve the memory. Boltanski, in his work, continously seeks the reflection of individual existence, often producing in the observer, a kind of melancholia related to the loss of innocence.

In 1993 Boltanski declared these words: "As an artist I possessed a mirror; whoever is reflected in the mirror lives, but the one who holds the mirror, the artist, is nothing. The mirror hides them. I am a machine that fulfills the wishes of others." This is where Bertrand Lavier comes into play, one of the most influential French artists of his generation. Since the early Eighties he has been questioning the relationship between art and reality, how to blur the line between painting and sculpture. The artist who once said "I make exhibitions, I do not make images, I have no studio", presents one of his well-known mirrors, which on this occasion will be painted in situ in the Oratory, days before the opening. A mirror "shows the image of what you think you see," confirms Lavier. But in his work, one cannot see, not even oneself. His thick brushstrokes of gel on the glass, reach a new dimension in "Après", forming a false projection. They create a fictional reflection, placing the viewer in motionless time, as if one's body were in a new atmosphere, floating between two worlds.

This journey culminates with Angelika Markul. This multidisciplinary artist's work abounds with the creation of video and installations, in which natural materials dominate and where the light is an essential element. For the occasion, the artist has selected an installation of felt, wax and rope which has been placed on the altar above a piece of blue neon which illuminates it. This work is part of her "Excavations of the Future" project (2016). After travelling to Mexico and visiting the ceremonial architecture of Mesoamerica, in Teotihuacán, there was born in her the need to evoke these places and represent their symbolism, to find the balance between the temporary stratum that separates the natural from the intangible. The search starts for the image that is hidden from the human eye, moving through the space before the Après.