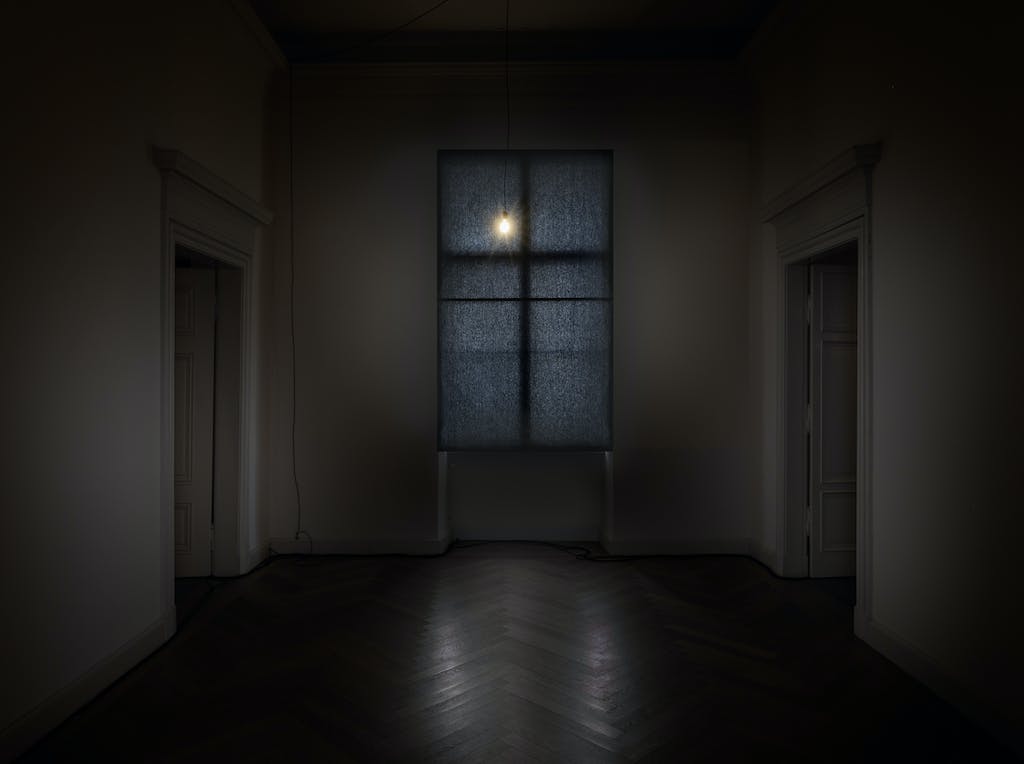 After Christian Boltanski inaugurated the then newly occupied premises of Kewenig on Museum Island in 2013, 'Danach' (‘Afterwards’) is the French artist's second exhibition at the gallery’s Berlin location. With an exhibition conceived as a Gesamtkunstwerk, Boltanski occupies the entire gallery building with examples of his most famous groups of works in which the core themes of his artistic work – the transience of the individual and remembering – are present.

Boltanski's iconic installation 'Coeur', which he first showed at Milan's Padiglione d'Arte Contemporanea in 2005 and which has been part of all major retrospectives of the artist since, is the centrepiece of the exhibition: throbbing bass tones penetrate all the rooms of the house through loudspeakers. A recording of Boltanski's heartbeat is accompanied by the synchronous flickering of several light bulbs across three rooms on the first floor. The light flickering in rhythm with the heartbeat becomes a symbol for the fragility of life and visualises the passing of time. At the same time, the work is also ‘the last self-portrait’ of the artist. The work additionally represents the starting point for 'Les Archives du Coeur' (2008), in which Boltanski has meanwhile collected over 70,000 recordings of heart sounds, which are now stored in an archive on the Japanese island of Teshima.

Many of the artist's works resemble contemplative monuments; they stand for the significance of a collective memory and open up a space of remembrance. The atmospheric installation ‘Crépuscule’ (1996) embodies the passing of time and transience. It consists of hundreds of luminous light bulbs, some of which go out day after day until the exhibition space lays in darkness.

Since the beginning of the Coronavirus crisis more than a year ago, death has pushed its way further into the public, but also private consciousness. Against this background, the artist's work gains an oppressive topicality. The city palace, usually illuminated with magnificent chandeliers, is bathed in cold, sparse light by LED strips hanging from the ceilings, so-called 'Guirlandes'. The windows of the building are covered, the otherwise light-flooded baroque staircase of the gallery is in semi-darkness. Here, in the haunting light of blue bulbs, the German word ‘Danach’ is emblazoned – not only a reference to the afterlife or the question of what awaits us after death, but perhaps also to the time after the crisis, which is longed for with great hope.