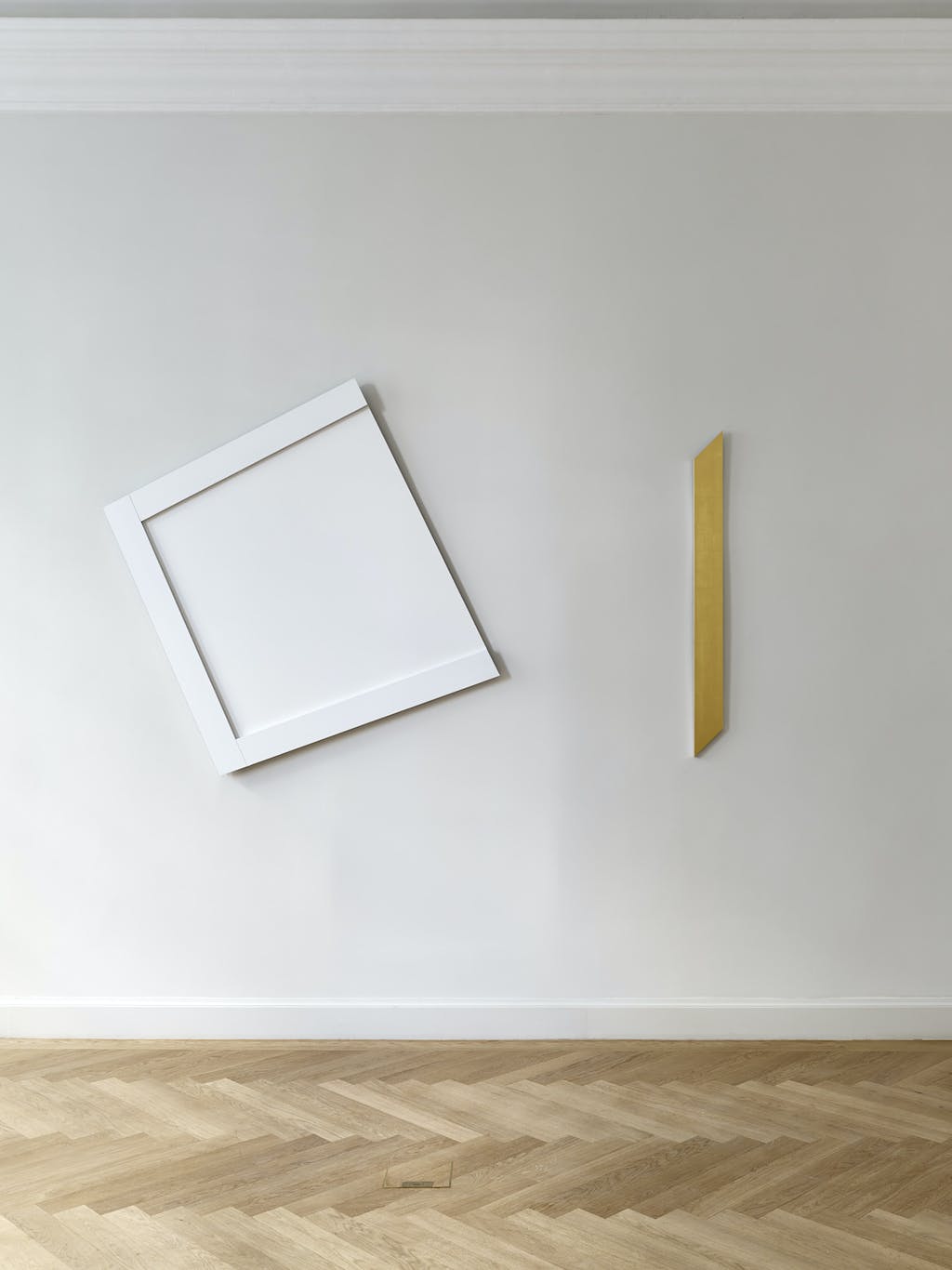 If a painting has only one colour, this colour will become the determining motif. If the colour covers the entire surface of the painting and if, in addition, the painting's format is conceived as an element to be freely fashioned, the real wall has been declared to be the painting's proper ground.

The German artist, Imi Knoebel, who was born in Dessau in 1940, creates painting-objects made of hard fibre or aluminium that seem to hover before the wall in freely contoured geometrical forms. Radically non-representational and reduced to the artistic principles of form and colour, his paintings nevertheless have a sensual effect. In large formats, the flat wall-sculptures possess a monumental presence whilst simultaneously hovering weightlessly.

In his new work cycle that will be shown at Kewenig from 8 March 2014, Imi Knoebel transposes characteristics of his artistic creativity into a new formal language. He paints aluminium plates in various forms with acrylic paint, each in a single colour, and joins them together into a plane through shadow-joins. Imi Knoebel devotes himself more pronouncedly to dealing with the 'non-colours' black and white already tried out in his early Linienbilder (Line Paintings) of the 1960s, bringing them into a suspenseful dialogue in various nuances with other patches of colour.

In the work, 19.09.2013, named after the day on which it was made, an opaque black ring forms a strongly contrasting counterweight to the reserved volume of a white polygon. Forms approximating an irregular square correspond with the angular oval that belongs to Imi Knoebel's striking vocabulary of forms, following the cycle of Kartoffelbilder (Potato Paintings) from 2011. The delicately coloured, overlapping combinations are balanced by powerful accents of smaller, coloured polygons, for instance, in red or yellow.

The work Ort - Rosa (Place - Pink) from 2013, to which the exhibition title refers, shows how Knoebel deals with space, being prepared by the keyworks, Raum 19 (Room 19) from 1968 and Genter Raum (Ghent Room) from 1979-1980. Ort - Rosa is a three-dimensional spatial formation consisting of two coloured walls adjoined at right-angles. You can really ‘walk into’ the colour employed as a means of artistically forming Ort - Rosa, which is thus removed from the two-dimensional flatness of painting. Imi Knoebel's masterly incisiveness grows out of a meticulous and, so to speak, joyful workprocess. He mixes colours, applies them to paper and makes models which he checks for visual effects. On the final aluminium subjectile, a powerful brushstroke remains in the colour, recognizable as a painterly moment.