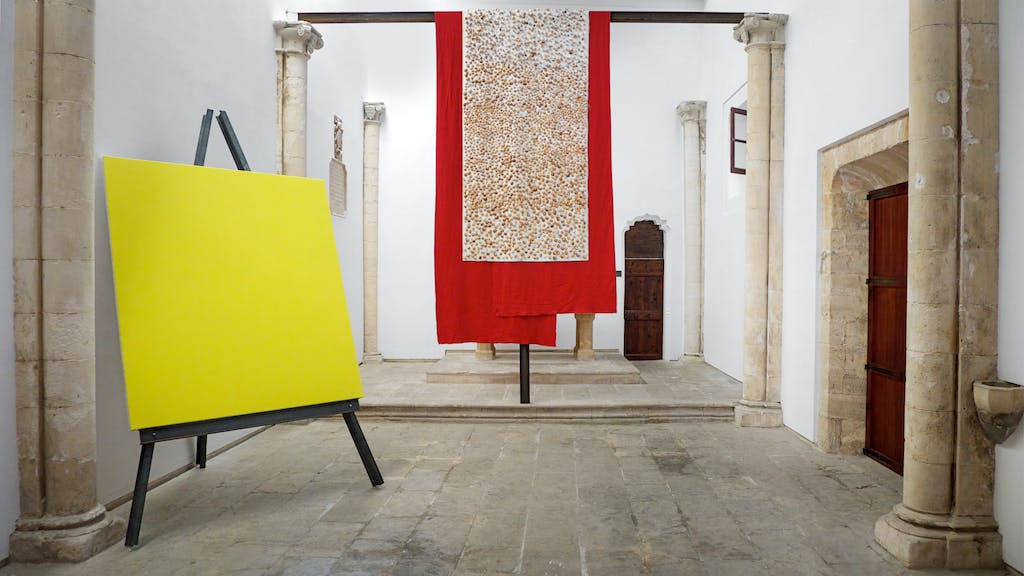 The name Kounellis stands for one of the most significant contributions to Arte Povera, since, in 1967, Jannis Kounellis took part in the exhibition ‘Arte Povera e Spazio IM’ in Genoa. Kounellis has expanded the range of artistic media by incorporating into his work supposedly banal or crude everyday objects and materials like steel, coal, burlap sacks, mounds of ground coffee or coffee beans, coat racks, as well as phenomena such as fire, smoke or living animals. He has continuously managed to free himself from the constraints of the two-dimensional canvas and consequently has put painting into new territory, always questioning the traditionally pristine, sterile environment of the gallery.

As such, Kounellis’ exhibition at the Oratorio de Sant Feliu, a chapel from the 13th century, provides further evidence of his attempt to leave the artist's studio, to deal with space in-situ and at the same time bears witness to the artist’s fascination with sacred spaces. The center point of Kounellis’ installation in the Oratorio is a 5 meter long canvas with shells sewn all over placed on a typical Majorcan red cotton fabric which is laying on a cross-like steel structure directly in front of the altar. The work reflects Palma’s vicinity to the Mediterranean sea and both the cross and the shells seem to echo Christian iconography. Kounellis' life and work have been permanently and particularly marked by the history and mythology of the Mediterranean, and despite being an atheist, spiritual symbols are central to Kounellis’ Mediterranean identity.

The canvas with shells corresponds with the other major works in the exhibition, such as a black square painted directly on the wall above the altar – an important reference for Kounellis which evokes the early abstractions and suprematist squares of Kazimir Malevich, alluding to questions about the endgame of modern painting. On the altar Kounellis has placed anew one of his iconic installations of burlap sacks filled with coal and covered with a steel beam. By using the entire chapel's space including its height, the artist has proven once again to be a master of his materials, the space and the occasion.

Kounellis lives and works in Rome since 1956. He has recently been honored with exhibitions at the Museum of Cycladic Art, Athens, Greece (2012); the Museum of Contemporary Art, Herning, Denmark (2009); the Neue Nationalgalerie, Berlin, Germany (2007); the MADRE Museo d'Arte Contemporanea Donnaregina, Naples, Italy (2006); and the Galeria Nazionale d’Arte Moderna, Rome, Italy (2002). Earlier on, the Museo Nacional Centro de Arte Reina Sofía held an exhibition of his work in Madrid in 1997. In 1994, Kounellis installed a comprehensive selection of works from the past thirty years in a boat called Ionion and docked this floating retrospective in his home port of Piraeus. In 1989, the artist was given an exhibition at the Espai Poblenou in Barcelona. Kounellis took part at the Venice Biennale several times as well as Documenta 5 in 1972 and Documenta 7 in 1982. Between 1993 and 2001 he held a professorship at the Düsseldorf Academy of Art. His work is represented in many renowned national and international collections.