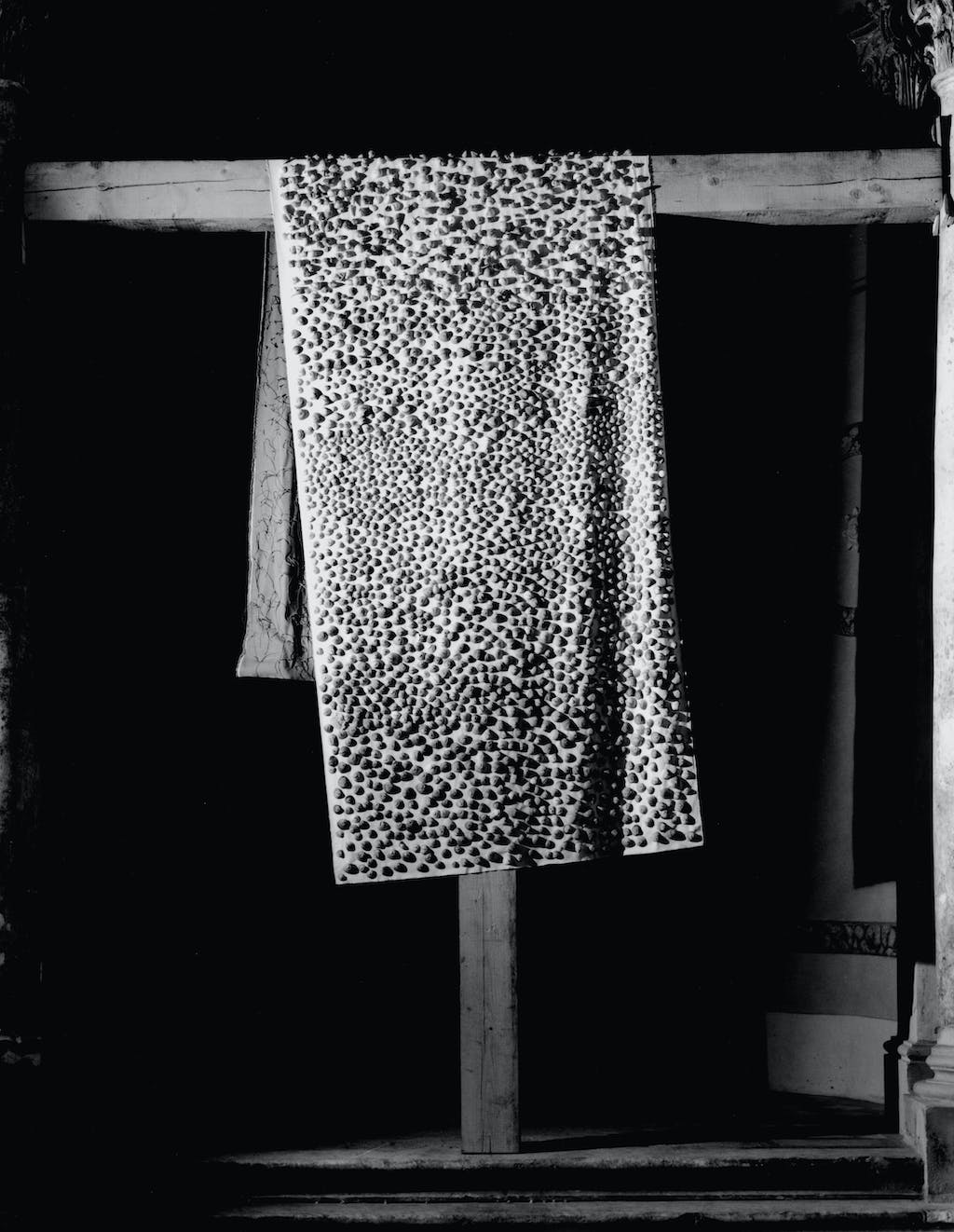 Jannis Kounellis (1936 Piraeus, Greece – 2017 Rome, Italy) was a founding father of the Arte Povera movement. After studying at the Academy of Fine Arts in Athens, he embarked on a one-way trip to Italy in 1956, settling in Rome. There, he studied under Toti Scialoja at the Academy of Fine Arts, whose scenographic approach to the artist-as-performing actor was fundamental to his early development. Kounellis created an entirely new aesthetic lexicon based on the use of humble materials combined with European and Mediterranean spiritual and cultural references. Plants, coffee beans, coal, tar, animals, wood, steel, fire, coats, burlap sacks and furniture translated into visual poetry that was imbued with the zeitgeist of the 1960s, making him one of the most significant artists of his time.

Kounellis’ canvases from the late 1950s to the early 1960s are anchored in reality through the use of words in compositions that appropriate the techniques of urban signage, a visual language that is distinctly his. In 1958, he begins to paint shop signs spotted on the city streets, e.g. ‘Trattoria’ or ‘Aceto Olio’, in paintings that offer a simple recording of place and time. Then he combines letters and figures, using the same language familiar from marquee signs, but this time creating his own vocabulary in compositions populated by crosses and arrows that evoke an abstract score. Read aloud during performances, these paintings turn into corporeal experiences that mark the passage of time – the process of making the work as well as the performative approach.

The wide array of objects used by Kounellis reveals his fluid and changing approach to art in constantly renewed experiments. In 1964, he introduces a musical score in his painting; in 1967, live singing birds and the element of fire. The latter is central to the artist’s interests: it has the power to transform materials, symbolising change and the social upheavals of the time. It is the energy of a radically new art, which is both aggressive in the rethinking of its own paradigm and fragile in the consciousness of its limitations. Coal, the energy source that fueled the industrial revolution, becomes increasingly present in Kounellis’ creative language, as a possible element of change.

In the late 1960s, while conservative society sees its framework being torn apart, Kounellis, aware of the artist’s position as a public figure of change, transfigures the essence of painting. In 1969, at the Galleria l’Attico in Rome, he presents twelve live horses in the gallery space, infusing life into art on a pictorial plane that has expanded into a stage to propose a renewed paradigm – apprehending not only art, but also the role of the artist in a changing world. His aesthetics is almost hostile towards the viewer, who is brutally awaken by sensorial stimuli that are unusual in an artistic context: fear, heat, smell.

Smoke and soot appear in works from the 1970s and 1980s, which is reminiscent of the element of fire in earlier works as a memento mori of post-industrial times. They also stand for obscuring and the vulnerability of Kounellis’ singular position in contrast to spectacularistic and mercantilistic art production. From 1982 onwards, he focuses on his own artistic history following a process of accumulation and reuse of materials – often affixed to steel sheets the size of a double bed – as a way of regenerating his language by drawing from the past while asserting the foundations of his creative approach. From the early 1990s on, his works develop into large installations very much informed by tradition and sacredness that often confront the viewer’s spatial awareness.