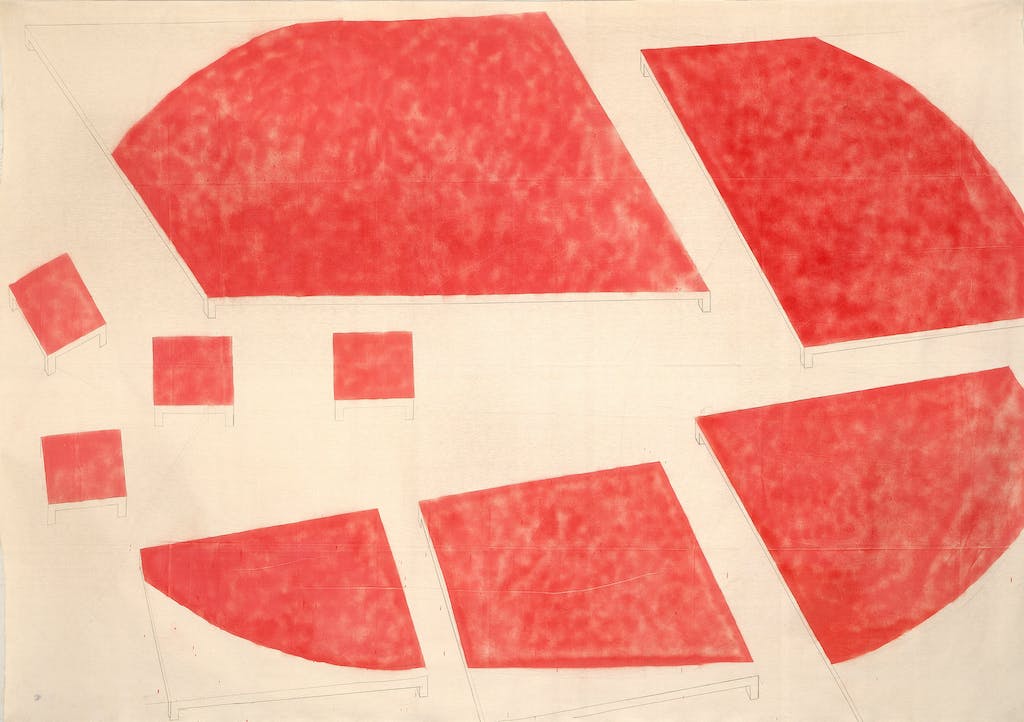 Mario Merz (1925–2003), one of the most influential artists of his generation, was acclaimed for his radical approach to materials and concepts that made him a central figure of the Arte Povera movement in the 1960s. Born in Milan, he grew up in Turin and started to study medicine before joining an antifascist group, which led to his being arrested and jailed. While in prison he experimented with drawing, and after being released he dedicated himself fully to painting.

In the 1950s and early 1960s, his paintings developed from the then-current trends in Abstract Expressionism and Art Informel. These works can be seen as diagrams or blueprints for his later, three-dimensional works, in which materials such as metal, neon, plastic, glass, wax, umbrellas, newspapers, vegetables and coats – symbolic objects from his daily life – are combined and juxtaposed to create new poetic meaning.

Merz’s work is based on laws of nature and man’s intimate relationship and dependence on these laws. His drawings, paintings, sculptures and installations are records of his observations and involvement with his environment (the natural, the man-made and resulting conflicted interactions between the two). His work is marked by a deep social commitment and by the constant search for a unique artistic vocabulary.

In 1968, Merz developed his fascination with the form of the igloo, that ancient and yet endlessly adaptable shelter used throughout human history. Their hemispherical shape makes these structures simultaneously structurally free-standing and autonomous while echoing the feelings of hope and progress induced by the social changes of the time. The igloo marks a radical formal break from conventional sculpture while providing a symbolic refuge for the artist who is in need of isolated dreaming as well as being an active member of his society.

From 1969, Merz began using the Fibonacci sequence – a mathematical pattern that depicts growth in nature – to further his quest for an organic approach to studying the relationships between man, nature and society. The manifestation of this sequence is revealed through Merz’s creative use of the spiral, both in terms of its shape and its conceptual means of recording and instigating progress. As a form prevalent in nature, the spiral promises exponential growth while being a symbol of the universal link in the patterns that connect art and society. Merz has used the sequence in numerous neon installations around the world – along the inner spiral of the Guggenheim Museum in New York (1971) and on the dome of the Mole Antonelliana in Turin (1984) for instance.

Merz participated in four iterations of Documenta, in 1972, 1977, 1983 and 1992. He was awarded the Praemium Imperiale for sculpture in 2003, and his works are included in major public collections, such as those of the Tate, London; Museum of Modern Art, New York; Centre Pompidou, Paris; Galleria d’Arte Moderna, Turin; Kunstmuseum St Gallen; Serralves, Porto; Museum Ludwig, Cologne; Museo Nacional Centro de Arte Reina Sofía, Madrid; and the Stedelijk Museum, Amsterdam, amongst others.

What is to be done?, Henry Moore Institute, Leeds, England