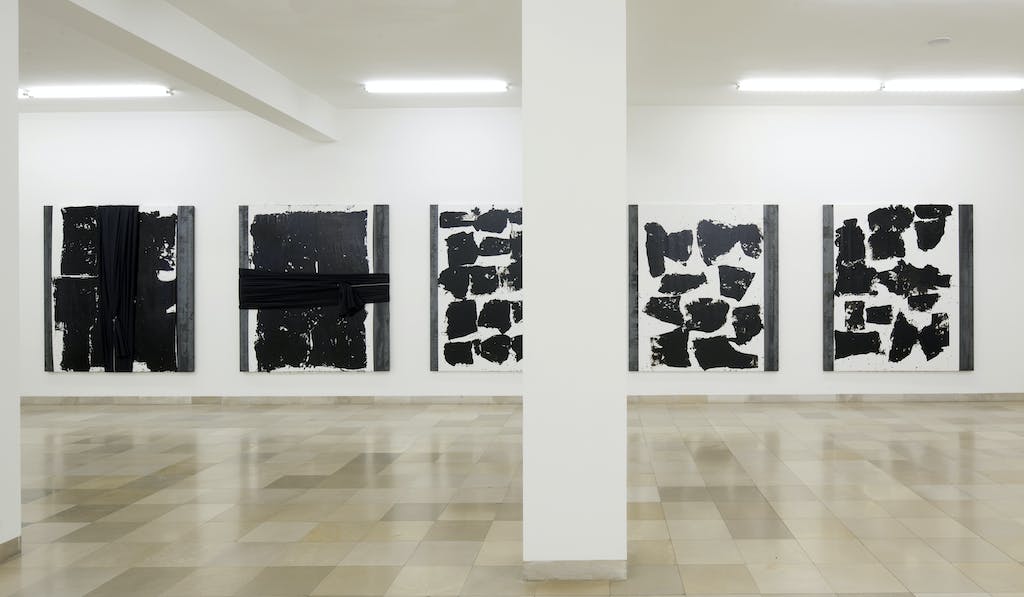 The exhibition of Jannis Kounellis, who was born in Piraeus in 1936, lives in Rome and is regarded as one of the most prominent representatives of Italian Arte Povera, presents new works by the artist. Five large paintings occupy the front wall of the main space at the Kewenig Galerie. Man-size metal plates are covered with canvas on which black impressions from fragments of pieces of clothing can be found. The show is concentrated on the most current tendencies within his creative work and displays at the same time, in impressive concentration, a central theme in Kounellis' oeuvre. The artist leaves behind traces of human existence in his works without showing humans themselves. He works on this series since nearly a year and will also present them within an exhibition at Museum Kurhaus Kleve, which will be organized by Rudi Fuchs within this year.

In the most recent cycle of paintings, Kounellis composes on the white canvas the impressions of pieces of wearing apparel separated into individual bits — coat arms with buttons, parts of lapels and jackets. The metal subjectile is combined with stretched textile and fleeting impression. By fragmenting the clothes and refraining from any distinctions in colour, Kounellis robs the pieces of attire of the uniqueness that they are supposed to lend their wearer in everyday life. He reduces them to the aesthetics of dress patterns. Kounellis, who has already proved himself to be an impassioned decomposer in earlier works, divides up boats, pieces of meat, tables and ancient sculptures according to instructions from boat-builders, butchers, tailors and others. By proceeding in a disciplined, rather than an arbitrary way, his works attain the tension peculiar to them, since the individual piece can always still be recognized as part of a whole.

In contrast to Yves Klein, who in his "anthropometries" from the 1960s still made impressions of the human body itself on the canvas, Kounellis' new works remain emphatically bodiless. With the aid of sewing machines that Kounellis has displayed in numerous earlier installations, the parts could easily be joined together into a whole, but the artist intentionally refrains from closing empty gaps. In his current exhibition at the Kewenig Galerie, Jannis Kounellis shows a formal series which, precisely due to its voids, leaves space to refer to human beings and a larger whole.