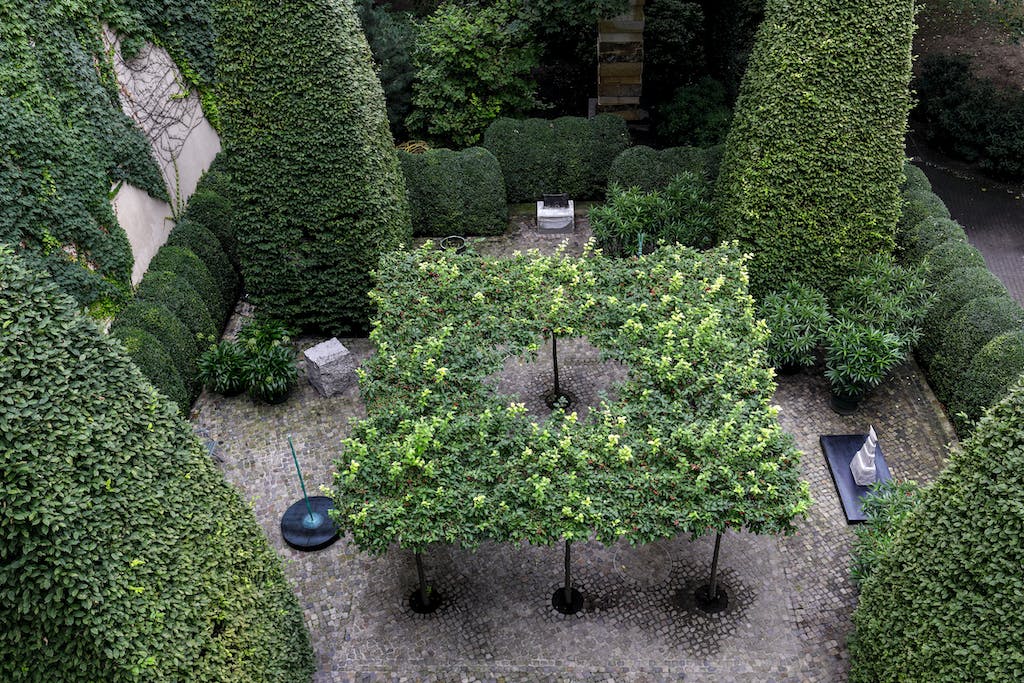 Kewenig is pleased to open an exhibition of works by Leiko Ikemura, for the first time focusing primarily on the gallery's garden in the backyard. Five bronze sculptures dot the symmetry of the outdoor area, which is designed in the style of Renaissance gardens.

Since the 1980s, alongside her work on canvas and paper, sculpture has been an integral part of Leiko Ikemura's multifaceted oeuvre, in which the various media encounter each other with equal value and are mutually dependent. In paintings as well as in sculptures of the artist, mythical creatures often appear, which can be located both in Far Eastern and Western mythology. The depicted bodies are usually in a fluid transition between man, animal and landscape. For example, the head of the almost architecturally constructed bronze 'Braut/Bride' (1990/2019) is adorned with a pair of cat ears. Without facial features it appears unapproachable, stoic – only the openings at the sides give it an erotic and vulnerable feeling.

Individual glazes or patina make every bronze casting Ikemura creates unique. Most of them are based on terra cotta sculptures – a material that allows the artist to work intuitively, in which the process of becoming, feeling her way towards a form, plays a central role. The traces of the processing remain visible even in the hard material of the casts, as in 'Bust' (1989/2018), which oscillates between body and landscape. It subtly embodies the idea of a primeval landscape where human bodies – apparently still being one with nature – can only be guessed at.

Alongside these archaic-abstract, massive forms, filigree steles on which fabulous creatures are enthroned lend the garden a fairytale atmosphere. Like all of Ikemura's works, the creature in 'Hare Column' (1992) is presented in a barely tangible state, combining natural female forms with long rabbit ears. Inside the gallery a recent sculpture made of glass and a three-part painting by the artist complete the presentation.

Leiko Ikemura (born in Tsu/Mie, Japan) lives and works in Berlin. The artist's work has received international recognition in solo exhibitions, for example at the Kunstmuseum Basel and The National Art Center, Tokyo (2019); Nevada Museum of Art, Reno, USA (2015); The Vangi Sculpture Garden Museum, Mishima, Japan (2014); Staatliche Kunsthalle Karlsruhe (2013); Museum of Asian Art, National Museums in Berlin (2012); The National Museum of Modern Art, Tokyo (2011); Kunstmuseum Liechtenstein, Vaduz (2002); Melbourne International Biennal, Japan Pavilion, Melbourne (1999). Her works are part of public collections such as the Kupferstichkabinett der Staatlichen Museen zu Berlin, the Bundeskunsthalle Bonn, the Kunstmuseum Düsseldorf, the Staatliche Kunsthalle Karlsruhe, the Nevada Museum of Art, Reno; the Kunstmuseum Basel; the Albertina Museum, Vienna; the Centre Pompidou, Paris; the National Museum of Art, Osaka; the Museum of Modern Art Shiga; as well as the National Museum of Modern Art and the Hara Museum of Contemporary Art in Tokyo. Between 1990 and 2015 Ikemura held a professorship at the Universität der Künste, Berlin. Since 2014 she has been teaching at the Joshibi University of Art and Design, Kanagawa, Japan.