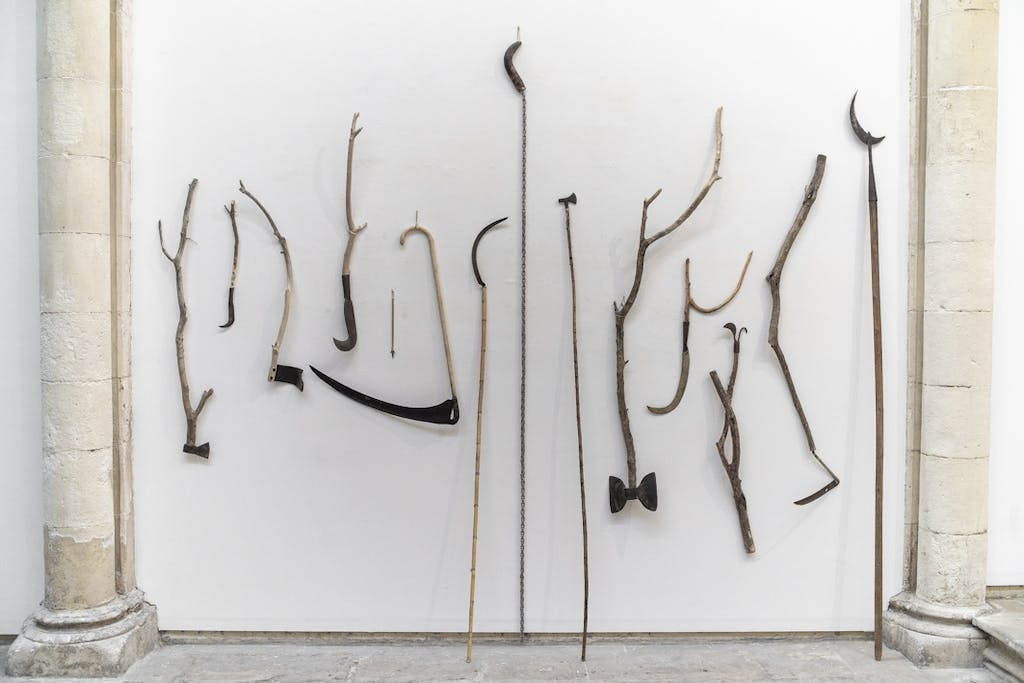 Oxymoron. It's a strange, ugly word, but it defines the technique that Marcelo Viquez uses to stimulate the intellect, seeking our reconsideration of unresolved issues. It is a “contradictio in terminis” (the concept’s literal definition in Latin, a “contradiction in terms”), consisting of “using two concepts with opposite meanings in a single expression, thus generating a third concept". This third concept, generated in an almost Hegelian manner, is embodied in the artwork we see on display in this exhibition.

If a weapon does no harm, nor does it appear to be able to do harm, is it truly a weapon? This is the first question posed. This crucial issue was commented on in a previous exhibition, “Los Comunes”, where it was concluded that "the explosion of a bomb that cannot explode is terrible, because it never ends". A weapon that does no harm is a lie that no one can believe; everything, absolutely everything, is capable of causing harm, and there is no weapon, or anything else for that matter, in this world which can escape this fact. Marcelo Viquez's trick consists of proclaiming innocent intentions that turn a blind eye to what happens afterward, or to what can happen. Everything can be harmful, even water (as the Chinese, inventors of the famous water torture technique, can attest); it just depends on who is in charge.

As regards exoskeletons, we already know that in Kafka’s Metamorphosis, Gregory Samsa awakens and finds himself transformed into a beetle, an insect with an exoskeleton. The meaning behind this is that his fear of the world has devoured his nightmares to such an extent that it has constructed armour to protect him. Marcelo Viquez’s wheel is a direct and crystal clear metaphor of this feeling.

Wood, incidentally, is usually associated with good luck, hence the saying, "touch wood", used to invoke it. But lady luck wishes to hear about statistics only in dealing with people to whom she herself has dealt a favourable hand. With her chosen few, lady luck is not so meticulous, and she gives herself to them promiscuously. This has implications in both life and in death.

There is another facet of these weapons, these strangely manufactured instruments (although I would argue that they were merely mentally created, so rather “mind-factured”, not manufactured), which alludes to mankind’s intrusion into nature. It reaches a point – due to the scale of man’s expansion in these times of sophisticated technology – that nothing can escape this encroachment. To the point where tree trunks grow into a perfect shape for the sawmill! The piece incorporating a mirror through which the future can be glimpsed (pure industrial geometry) and its related design speak to all of this while connecting with a previous series of Marcelo Viquez’s work, shown at the 2014 exhibition Riesgo Necesario in Es Baluard museum.

A particularly meaningful piece in this exhibition is the diptych formed by a “fossilised” book and a video showing how it was created. In a previous life, the book had been a roll of industrial Aluminium foil, used in the hospitality industry, whose sheets became completely fused together. Though, like any book, it contains bits of memories and testimony to the past in each of its “pages”, it is impossible to read. It is a book to be contemplated from the outside, a book that can be read without knowing how to read, a book for the grammatically illiterate (although not for the artistically illiterate). The video accompanying it ultimately provides a new conceptual oxymoron: whereas books are usually created through the mind (and I mean usually) this one has been, literally, “manufactured”. It is a working-class book, a representative specimen of so-called “low culture”, the distilled product of indigestion between the classes.