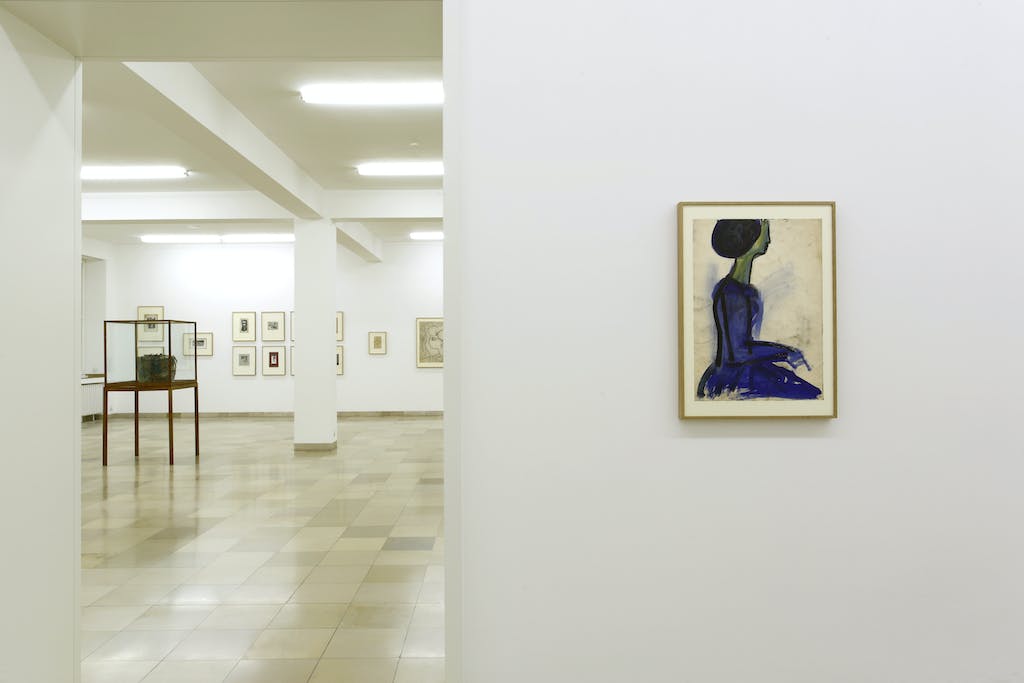 For years, Miroslav Tichý  (born in 1926 in Netcice, Moravia) shot thousands of photographs of women in his small hometown with his hand-made cameras, hidden from the view not only of his subjects, but also of the police, who were keeping a close eye on the eccentric artist thought to be critical of the system. He thus created countless portraits, full body shots and details of shapely women's legs. Tichý waited patiently until the unknowing models coincidentally assumed classical poses in community pools, on the street or on the television screen. The lenses of his cameras, constructed out of cardboard tubes and metal cans, and the primitive developing process lend the photos a haziness, perhaps even a certain sfumato, which appears classical and reminiscent of the old masters. The photographs, all of which are unique, have a certain object character, since they are frequently over-painted to stress particular details or, as the artist says, "retouched". They carry traces of their inadequate storage in Tichý's simple, poorly heated lodgings, which he periodically shared with rats. Hand-made mounts, the artist's fingerprints, the imprint of a fly that got caught in the developing bath, and scratches from the finishing process all underscore the painterly quality of these fascinating photographs.

The Kewenig Galerie is presenting Tichý for the first time in its Cologne gallery, following a highly successful exhibition in Palma de Mallorca. The comprehensive one-man show is being organized in cooperation with the Foundation Tichý Ocean and Roman Buxbaum, who discovered Tichý over twenty-five years ago and has been collecting his work ever since. After three years at the academy of art in Prague (1946-48), Tichý began painting and drawing before he finally began experimenting with photography. Harald Szeemann exhibited Tichý's work for the first time at the Biennale de Sevilla in 2004. Soon numerous museums throughout the world began showing the photographs of this eccentric Czech loner to an increasingly enthusiastic public. Curators and critics began comparing his curious oeuvre with Gerhard Richter's blurred photorealist paintings, Sigmar Polke's photomontages and Christian Boltanski's photographic archives. Nevertheless, the artist remained at a distance from the art world and remained true to his makeshift cameras and primitive developing processes. Tichý's intuitive conceptualism fits perfectly into the artistic program of the Kewenig Galerie, which now represents the artist on a long-term basis.

The exhibition includes both photographs and drawings. The female body is the central motif throughout Tichý's entire oeuvre, and the all but manic intensity of the artist's approach towards this leitmotif reveals that the artist and recluse limits his relationship to the other gender to an illustrative level and avoids direct contacts. Tichý approaches women with respect. His photographs of summer beauties never appear indiscrete or sexist, but are rather an homage to womanhood, which at times appears to take the form of an almost religious adoration. The exhibition will be complimented by a presentation of Tichý's handmade cameras and lenses. Documentary films about the artist and his life introduce his work and present a wonderfully cantankerous personality, who has taken the hearts of the international art world by storm.