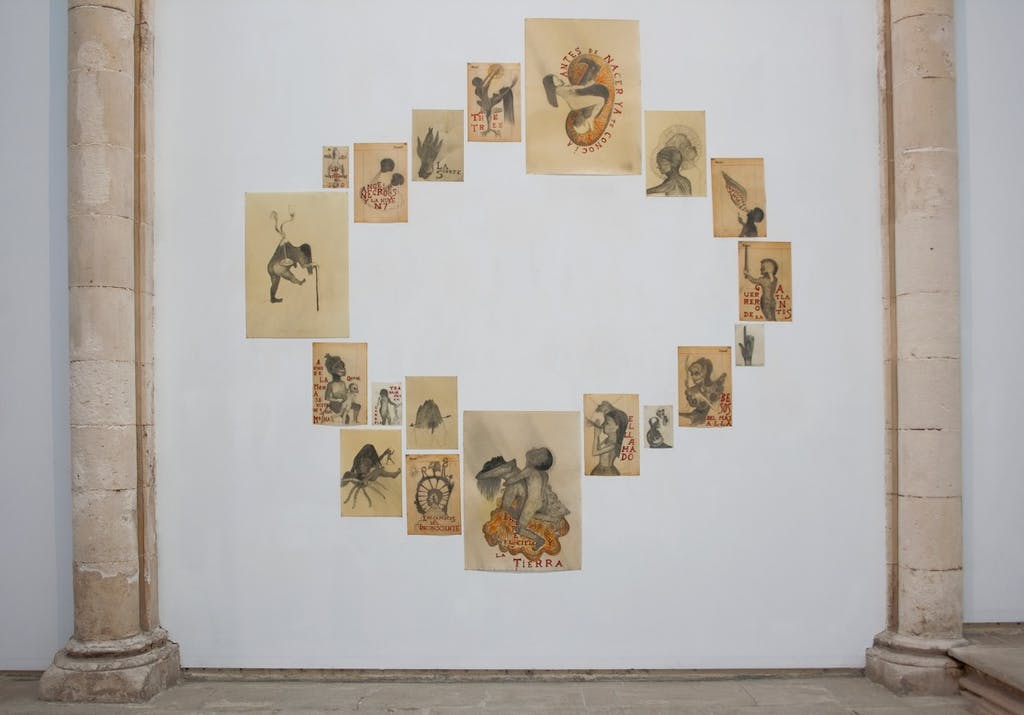 "Mi mundo es literario." With these words, Sandra Vásquez de la Horra, who was born in 1967 in Viña del Mar, Chile, and today lives in Berlin, describes the starting-point for her drawings. Her "literary world", simultaneously artistic model and source of thematic inspiration, is closely associated with the Chilean author Francisco Coloane, and influenced by sailors' novels such as Ernest Hemingway's "The Old Man and the Sea".

In the new works that were made especially for the upcoming exhibition at the Galería Kewenig, Sandra Vásquez de la Horra translates her literary world into drawings whose content and technique cast a light on what is close but nevertheless forgotten.

The figurative drawings, that are often combined with typographical elements, recall not only Latin American folk art, but also European portrayals of the apocalypse. They concentrate on a few main characters and their actions. By means of shading that is sometimes fine and sometimes intentionally coarse and rough, she gives the portrayals plasticity. In line with her biographical background, Sandra Vásquez de la Horra can draw on diverse sources from literature, film, art and science. The artist grew up in Chile and, as a child, came into contact with Chilean culture and also the European culture of Spain and Italy. As an adolescent she was engaged in the socialist liberation movement in Chile before she turned to studies in art, graphic design and typography which led her from Viña Del Mar via Valparaiso and Santiago de Chile finally to Düsseldorf and Berlin. Apart from using literary models, the artist also draws on her personal recollections and dreams.

The "Ondinas" (mermaids) who give the exhibition its name are, according to Greek mythology, female semi-divine water spirits with fascinating voices and unsurpassable beauty who remain soulless until they marry a human being. Mythical and real figures of the water — mermaids and sailors — are exposed without protection to the ocean's vastness and confronted, in their comparable insignificance, with the powerful element of water. The loneliness of these protagonists and their elementary need to overcome it is the central topic in Sandra Vásquez de la Horra's new cycle of works.

Her method of covering the drawings with a layer of liquid wax is unique. In this way the drawings attain a peculiar depth and the paper a characteristic materiality that distinguishes it from normal, untreated paper and makes the drawings seem like sealed, preserved, and above all, fragile artefacts from a past era.