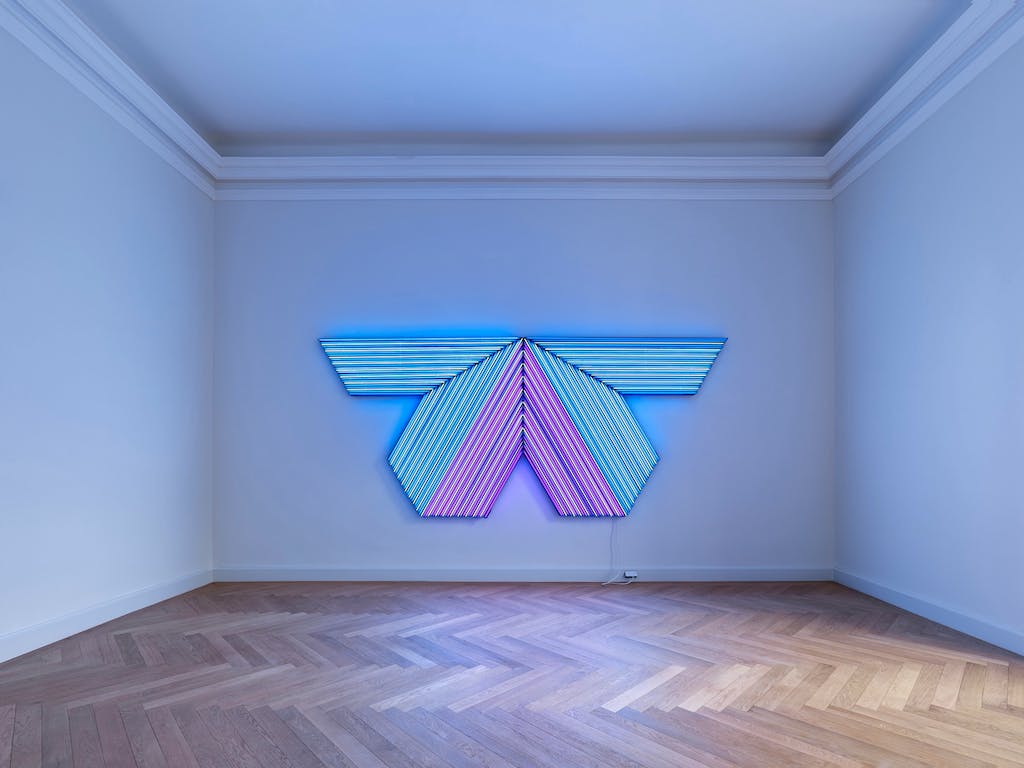 French artist Bertrand Lavier (b. 1949 in Châtillon-sur-Seine, France) started his artistic career in the early 1970s while finishing his studies in horticulture. He lives and works between Paris and Burgundy. His oeuvre can be understood in relation to his contemporaries of Conceptual Art, but never without a humorous undertone.

Lavier questions visual habits by extracting carefully selected elements of our banal everyday life, pop culture or art history. Covered in paint, put on a pedestal or combined one with the other, traffic signs, refrigerators, pianos, cars or other objects familiar to us are isolated from their usual context, deprived of their function and converted into an artwork.

Lavier has compiled several groups of works throughout the decades of his career. The ‘objets peints’, his signature pieces that he has made since the 1980s, oscillate between painting and sculpture. In works like ‘Grotrian Steinberg’ (2016) or ‘Atomium’ (2007) he covers objects with thick impasto, blurring the border between art and the ordinary. In his ‘Objets soclés’, Lavier picks up the Dada traditions of the objet trouvé and New Realism, putting banal objects like a traffic cone onto pedestals, displaying them as sculptures. He has developed this concept further by placing industrial objects one on top of the other in his ‘objets superposés, thus creating associative combinations – playful and poetic at the same time – like in ‘La Bocca | Bosch’ (2005).

For documenta 8 in Kassel, Lavier created an oversized tennis court. By restructuring the typical colours and lines of sports courts, Lavier turns them into paintings that can also be perceived as a flat sculpture. The artist’s largest work in scale, the 225-square-metre ‘Composition en quatre couleurs, detail’ (2011) is also part of this body of works and was shown in his solo exhibition at the Musée d’Art Contemporain of Saint-Étienne in 2011.

Bertrand Lavier lives and works between Paris and Burgundy. The Centre Georges Pompidou dedicated an extensive retrospective to him in 2012. The artist has had further important solo exhibitions at Kunstmuseum Liechtenstein and the Palais de Tokyo, Paris (both 2016); Kunstmuseum Luzern (2017); Espace Louis Vuitton, Tokyo (2018); the Villa Medici, Rome (2009); and the Musée d’Art Moderne, Saint Étienne (2005).