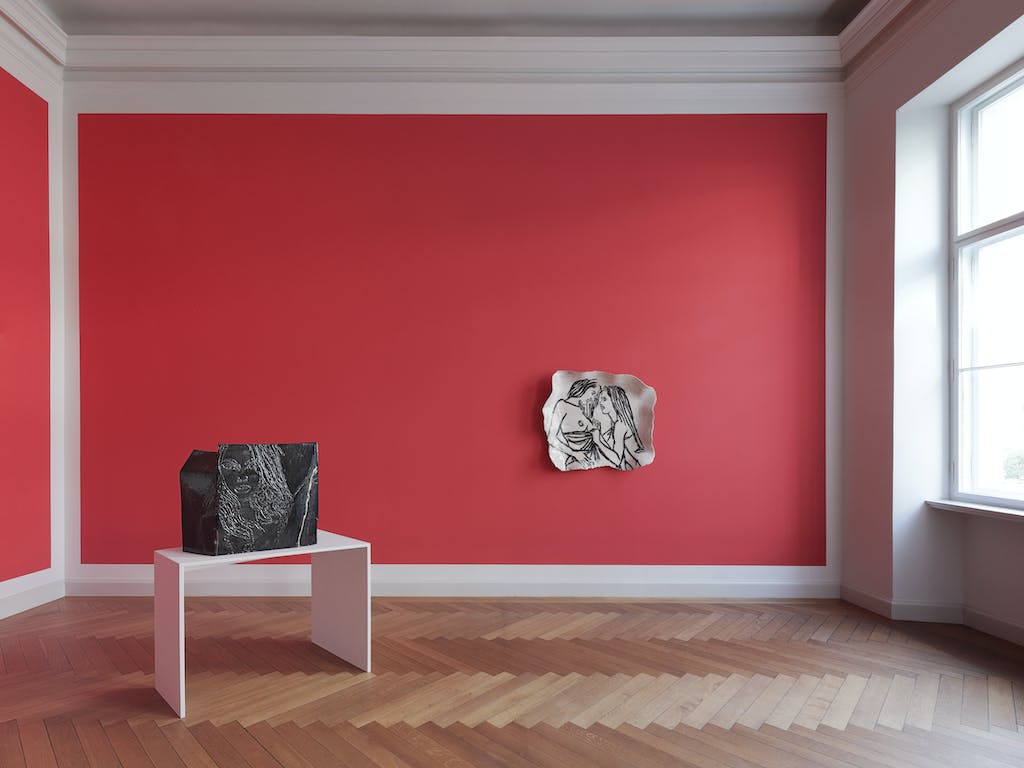 Kewenig is delighted to present Ghada Amer's second exhibition at the gallery. Titled 'The women I know', the show focuses on a new body of works consisting of four moving portraits of female friends in Amer's signature embroidered painting style, along with a dramatic self-portrait in black and white. The exhibition also gathers a constellation of ceramics in an attempt to survey the artist's most recent sculptural works.

Painting is at the core of Amer's creative process. When studying for her MFA she could not attend painting classes because the teacher only accepted male students. Hence painting became an act of rebellion against cultural output that was dominated by men – it was a sign of revolt. She had to find another way to paint, to create a pictorial language of her own in order to address and resist the systemic obliteration of females from art history. A craft traditionally associated with women, needlework is Amer's starting point in developing an oeuvre that questions gender power structures whilst embodying the slow and laborious process of building one's identity – through the needle repeatedly piercing the canvas – in a continuous process of writing the body.

'The women I know' series is the latest development of Amer's superimposition of figures and text, a visual approach she started to experiment with in 2013. For these bold and vivid portraits of friends and collaborators – completed in her New York studio during the lockdown caused by the coronavirus pandemic – she departs from the stereotypical figures sourced from porn magazines and popular culture we have seen in earlier work. In these intimate portraits, which are supported by a strong emotional background, substance seems to emanate from the canvas, reminding us of other women we know. The faces of the sitters are inextricably intertwined with a textual background made of quotes related to politics and feminism that are repeated all over the canvas. They reflect an array of the social concerns at the core of Amer's creative process, and include phrases such as 'Your silence will not protect you', by feminist writer Audre Lorde, or 'It was we the people; not we the white male citizens; nor we the male citizens; but we the whole people, who formed the Union.[...] Men, their rights and nothing more; women, their rights and nothing less', by activist Susan B. Anthony.

Just like embroidery, ceramics is another way for Amer to paint without painting, freeing herself from subordination. The exhibition displays a selection of sculptures created over the last couple of years in two distinct formal styles: figurative plates and large ceramic slabs that Amer considers paintings, as well as purely abstract sculptures. Amer's erotic aesthetics translates into naked female figures in the midst of lesbian foreplay – drawn with coloured stripes on contrasting ceramic pieces. A collateral product of these large works, the 'Thoughts' consist of ceramic strips removed from the slab when engraving the preliminary drawing. Amer presses the carved-out material in her left hand, unconsciously transforming them into fascinating abstract aggregates.

The collaborative works on paper that Ghada Amer creates together with Reza Farkhondeh are the result of a profound and long-standing artistic exchange. Since 2001, when they first worked together in New York City on a series of drawings and prints, they have continued creating mixed- media works under the acronym RFGA. Using varying techniques and materials, such as fabric, masking tape, and watercolors, the artists exchange works between their studios – the confident erotism of Amer's work commingling with the shapes and beauty of nature of Farkhondeh and vice versa.