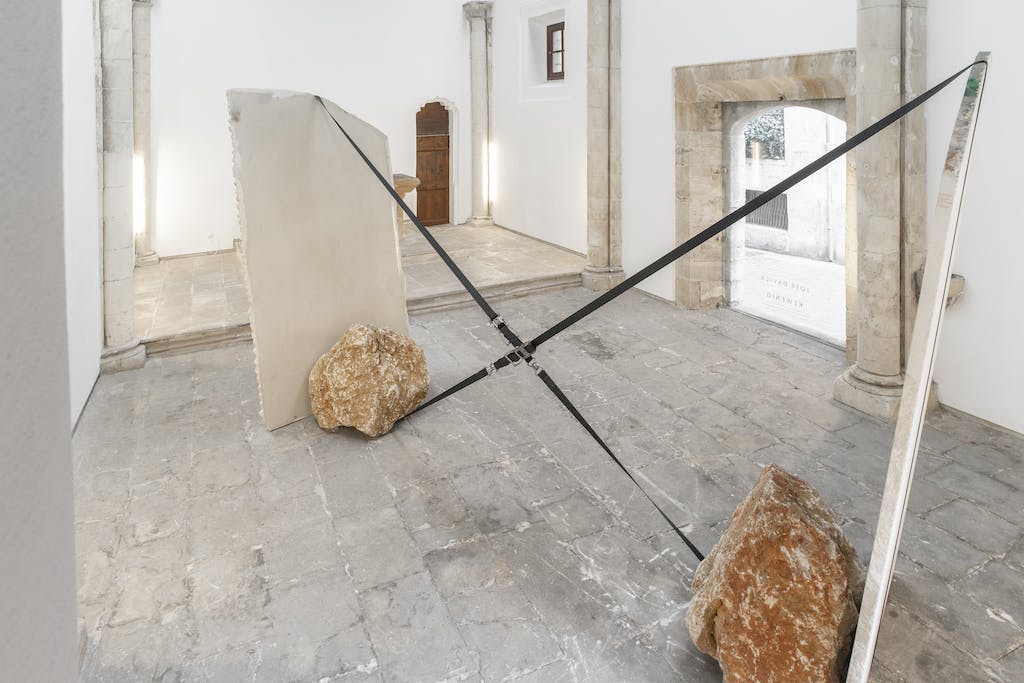 Kewenig is delighted to present the first exhibition of Jose Dávila with the gallery in our Palma space. Entitled ‘Fuerzas Opuestas’, Dávila’s monumental installation was conceived especially for the oratory, building a dialogue between his raw materials and the unique architecture of the 13th-century chapel.

Over the years, Dávila has developed an iconic body of works based on apparently precarious constructions that seem to challenge gravity. Using industrial and organic elements such as steel, stone and glass balanced in minimalistic assemblages, he defines an aesthetics of equilibrium. ‘Fuerzas Opuestas’ consists of two locally sourced Crema Niza marble slabs maintained at an angle by large calcareous stones and industrial ratchet straps. Held together by the weight of the stones and the tension in the straps, both slabs counterbalance each other in a construction that appears on the brink of collapse.

Dávila’s creative approach is a strategy of contrasts: contrast between tension and resistance, but also between the smooth surface of the marble and the rough aspect of the rocks, between the organic nature of the stones and the industrial straps. These opposing elements cancel each other in a delicate act of balance, capturing time and space within Dávila’s vision, which embodies stillness in motion. The installation echoes the space of the oratory – pillars and beams made of stone and wood – while bringing awareness to the natural forces at play.

Resonating with ‘Fuerzas Opuestas’, another sculpture by Dávila, ‘Primitive irruption’, 2021, is installed outdoors in the Moll Vell district of Palma. Consisting of steel beams stacked with a boulder, it marks the location of a new cultural institution to be inaugurated next year.