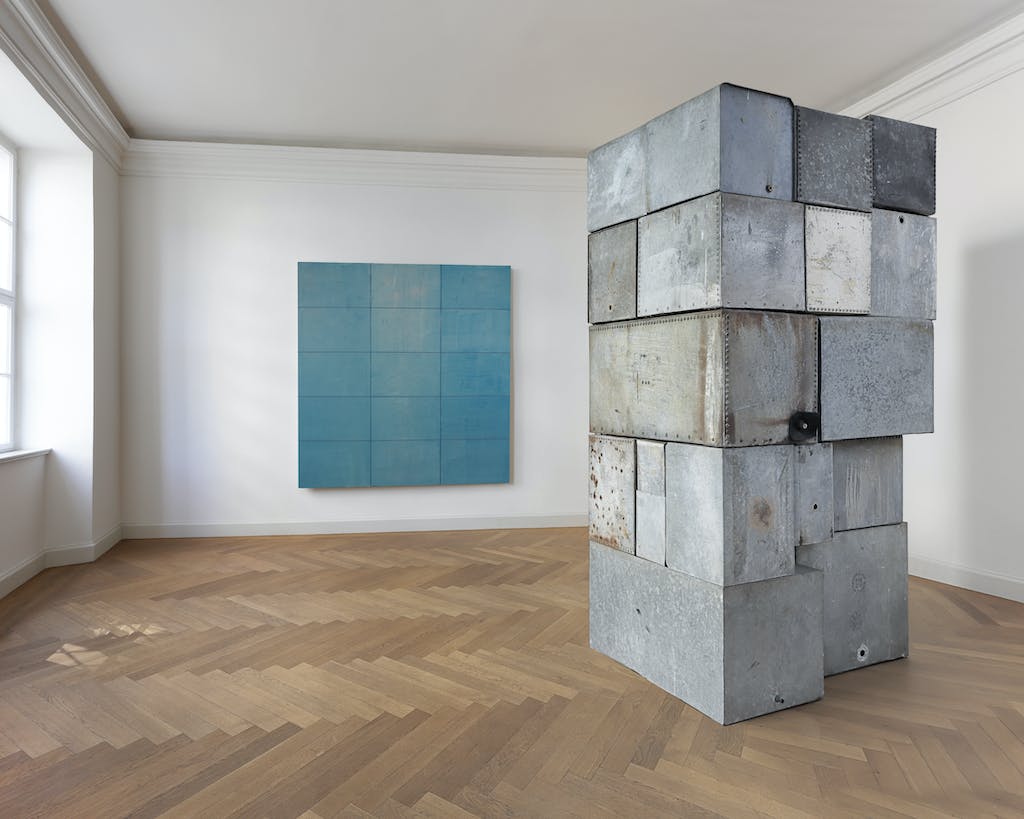 Kewenig presents the third solo exhibition of paintings by Sean Scully (b. Dublin, 1945) in the Berlin gallery. Spanning almost 50 years of the Irish-American artist’s career, the exhibition gathers major large-scale paintings from the 1970s until today, with examples from the most important groups of works like his famous ‘Figure’ or ‘Wall’ series as well as one of his most recent ‘Dark Window’ paintings. Renowned as one of the most significant abstract painters of our time, Scully has dedicated almost his entire career to his core motif of vertical and horizontal colour blocks and stripes. Continuously redefining abstraction, he has created a vast body of works that transcend way beyond this formal vocabulary and palette, exploring the nature of interpersonal relationships while the aura of the works ranges from the romantic to the melancholic.

Scully made his early grid paintings, such as ‘Overlay #2’ (1974) at the time when he still lived in Newcastle-upon-Tyne in England, inspired by his surroundings in the industrial city. In these works the duality of horizontal and vertical and their crossing is in the foreground, creating an illusionistic effect. In later years, he transforms the stripes and grids of his early work into spiritual, emotional and poetic works. Their rational and rigorously structured, always balanced composition at the same time gives space to a strong passionate expression.

The 1980s are represented in the exhibition by the sculptural relief-like work ‘Outback’ (1984). In these years, Scully began to create voluminous, architectural shapes which seem to contradict his earlier, minimalistic language. Consisting of three panels, the work almost recalls an altarpiece, but with the three parts overlapping, one stepping in front of the other.

In the 1990s Scully started working on his acclaimed series of ‘Wall of Light’ paintings. Composed of blocks and bands of colour – pigment and light – they evoke the structure and solidity of a brick wall while leaving room for the projection of emotions. ‘Day Night’ (1990) incorporates this rhythmic compositional motif, while moonlight and daylight exist side by side.

The group of ‘Passenger’ works, in which a small painting is framed by a larger canvas, goes back to Scully’s personal history and refers to his family’s departure from Ireland on a boat. In ‘Passenger Night’ (1998), this rectangular ‘inset’ of narrow strips stands out from wide horizontal colour bars in alternating nocturnal hues, suggesting a spatial perspective to the viewer’s eye. ‘Insets’ like this one should become of Scully’s most essential painterly discoveries that is also at the base of his ‘Figure’ paintings:  ‘I always thought of the insets in my paintings as figures, cut in or out of their context – their personal landscape. Bodies that linger.’ (Sean Scully in Inner, p. 25)

Scully advances the stripes across the entire surface in his famous ‘Landline’ series, begun in 2000, stacking bands of colours to form horizons evoked in landscapes. The boundaries of sea, land and sky come to touch each other and create equilibrium as well as tension. In ‘Black Window Grey Land’ (2020) the Romanticism of these abstract landscapes meets the Suprematist paradigm of a pure monochrome shape. The work is part of Scully’s ‘Window Paintings’ body of work which is also based on his concept of the ‘insets’. The black rectangle in the picture panel is thus not painted over, but actually inserted within the larger aluminium panel. While clearly referencing Kazimir Malevich’s ‘Black Square’, Scully is contemplating his own work by literally opening up the painting.

In recent decades, Scully has also repeatedly created monumental sculptures. Using elements of steel, stone, bronze, glass, or painted aluminium, the artist extends his motifs into space. In ‘Zinc Tanks’ he stacks galvanized water tanks, echoing the structure of his ‘Wall’ paintings, the texture of the material lending the sculpture a painterly quality.